The Politics of Selling Weapons to Algeria 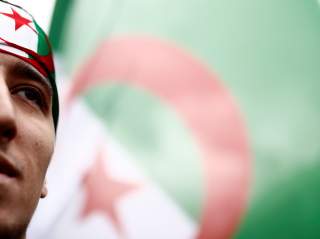 One of the biggest buyers of Russian weapons systems on the African continent wants the United States to revisit the restrictions that prevent it from buying military gear made in America.

Algeria’s ambassador to the United States, Madjid Bouguerra, told the National Interest that his country is looking expand its weapons acquisition program and improve its military-to-military relationship with the United States, which has been on a slow but steady upswing. The North African country’s interest in acquiring U.S. firearms and other battlefield products comes in the wake of the Trump administration’s push to relax America’s restrictions on its foreign military sales—and also in the aftermath of the administration’s late 2018 decision to impose sanctions on countries that purchase weapons from Russia. It’s also a topic that Bouguerra has put on the table in the lead up to a high-profile meeting with defense officials in Washington which, he said, is slated to occur in July.

A State Department spokesman declined to comment on the department’s relationship with Algeria; and the Defense Department did not respond to an email inquiring about the July meeting.

In an interview with the National Interest, Bouguerra got more specific about his country’s quest to obtain foreign weapons.

But he stopped short of citing specific weapons.

The State Department and Defense Department are barred from providing military assistance to countries with a history of human rights violations by the Leahy Law, a 1990s-era human-rights law named after Vermont Senator Patrick Leahy.

“[T]he human-rights piece is a big part of how we train and we just need to have to perhaps streamline some of the Leahy issues, but we can't walk away from that,” Gen. Thomas D. Waldhauser, the leader of U.S. Africa Command, told the House Armed Services Committee during a March 7 hearing on U.S. military activities in the Middle East and Africa.

Human Rights Watch describes Algeria as a country that cracks down on peaceful speech, overlooks women’s rights issues, and is uncooperative with the occasional United Nations rights expert. But it is also a country that plays a significant role in Africa’s war on terrorism and, like the rest of the international community, has watched America bend its rules for valued war-on-terrorism allies.

For instance, following Abdel Fattah El-Sisi’s infamous 2011 coup d’état, which unseated Egyptian president Mohamed Morsi, the United States gave Egypt four F-16 fighter jets. The delivery of those jets was initially delayed following the “revolution,” but by 2015 President Barack Obama had restored military aid to the country and paved the way for Egypt to receive the last four jets of its original twenty-jet purchase.

El-Sisi is now president and was recently altered the country’s constitution so that he can stay in office until 2034.

Algeria has spent billions of dollars on European warships over the past decade, buying two German-built A200 frigates and ordering a landing and logistical support vessel from an Italian defense contractor. But even though the coastal country is broadening its weapons portfolio, public accounts show that Algeria, which boasts one of the largest defense budgets in Africa, has remained on Russia’s top ten list of foreign military sales customers. In fact, Algeria was second only to Egypt on the list of African countries lining up to buy Russian gear in 2017.

Algeria’s dependency on Russian weapons stems from a dark period in the country’s history, back when Islamic extremists murdered roughly two hundred thousand citizens while on a mission to create an Islamic state; the bloodbath lasted throughout the bulk of the 1990s. A military-to-military relationship with Russia was critical for Algeria at that juncture.

“In the ‘90s when we were facing the terrorist aggression none of the Western Countries accept to deliver to Algeria military equipment to help us combat the terrorists,” Bouguerra explained. “They all thought that, ‘It’s a civil war, and we don’t have to interfere in that.’ So, the only countries were China and Russia. So, we had to buy from them for our own sake, for the sake of our own national security. But unfortunately, after 9/11 the whole world realized that terrorism is a reality. Terrorism is a danger for the whole international community, not only Algeria.”

The Art of the Sale

Selling weapons isn’t solely about the exchange of billions of dollars; quite often it’s about building long-term relationships and gaining leverage in the foreign-policy arena. Moscow has expressed its desire to expand its footprint in North Africa through such sales, noted Bradley Bowman, the senior director of the Center on Military and Political Power at the Foundation for Defense of Democracies.

“Russia, over the last few years, has been really making an effort to try to sell weapons to Algeria and trying to increase their influence in North Africa the same way that they have been trying to do so in the Middle East,” Bowman said.

In fact, Moscow sold forty-two Mi-28N combat helicopters and eight Mi-26 transport helicopters to Algeria between 2013 and 2015—the type of battlefield hardware that comes with annual sustainment costs. Other weapons systems come with logistical tails to which there are attached “very significant diplomatic and economic benefits” that can last for decades, Bowman said.

In the case of Algeria’s latest purchases, “you’re going to have Russian personnel there theoretically in the country for long periods helping to maintain those systems as parts and supplies come in and so forth, and that has diplomatic political consequences itself,” he said.

General Waldhauser briefly weighed in on Russia’s sales trend during a February 7 congressional hearing on the Defense Department’s annual budget request. The bulk of Africa’s war weapons are supplied by the Russians, he said, and Algeria remains “one of their number-one customers.”

Waldhauser mentioned Algeria only three times in three consecutive sentences during his prepared testimony. It was so small of a nod to the nation that it practically negated the value ascribed to the large gateway country wedged between Africa and Europe. He didn’t elaborate on the U.S. military’s relationship-maintenance efforts in that part of the continent until after Republican Senator Mike Rounds asked him about whether there were any opportunities to improve the U.S.-Algeria security relationship.

The four-star general then promptly described his personal efforts to interact with the country’s senior officials, but he also noted that “the AFRICOM relationship is one that is doing the crawl, walk, run stage.”

“We have limited engagements, but we work some issues with equipment and repairs,” he said. “We have visits periodically. We’ve participated in some of these D-Day activities and so forth. So, although it’s an arms-length relationship, we do all we can to foster that.”

Weeks later, on March 7, when Waldhauser was yet again discussing the Africa mission with members of Congress, he didn’t once mention Algeria, which sits at the crossroads of global-power competition.

Joint training exercises and integrated education programs often lay the groundwork for diplomatic overtures. But those pathways take years to construct before they can be used as information highways for high-speed communication, said Colin Clarke, a senior research fellow at The Soufan Center and an adjunct senior political scientist at RAND Corporation.

“That takes a really long time,” he said. “That takes sending guys to the war college, building those relationships when people are at the captain level . . . student exchanges where these guys will come over, meet people at their own level, and as they progress, in theory, they can maybe one day pick up the phone and call someone in Algiers that will have spent three years at the Army War College in Carlisle.”

There is currently an international fellow from Algeria attending the U.S. Army War College in Pennsylvania, according to Carol Kerr, a public affairs officer and legislative liaison at the war college. Five other fellows from Algeria have taken part in the college’s critical relationship-building program over the past decade she said. College records show that those five students have all held the rank of lieutenant colonel and that each one attended the college solo in the years 2011 through 2014, and 2018.

“With very few exceptions, our student body includes a single international officer from any one country,” she said in a March 4 email. “We have 80 seats in the resident course—this year filled 76 seats (senior military officers) from 73 countries.”