Pomp and Circumstance: The Challenge and Complexity of Engaging India 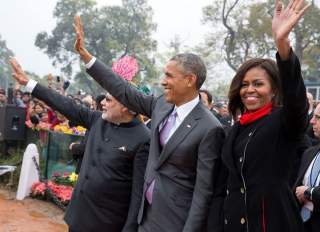 Pundits, scholars and even decision makers following President Obama’s visit to India might have gotten the impression that the president’s trip was a little short on substance. India’s prime minister, Narendra Modi, had invited Barack Obama to attend the colorful Republic Day Parade, which celebrates the adoption of India’s constitution. Prior to attending the parade, which was enough of a show in itself, President Obama also paid a visit to the shrine that holds Mahatma Gandhi’s ashes. A stop-over at the Taj Mahal, India’s renowned monument, was cancelled because the president wanted to attend King Abdullah’s funeral. In light of this schedule, one inevitably has to wonder whether symbolism was valued over substance.

It would, however, be a mistake to belittle the gathering as just another attempt of two statesmen to do photo ops. Yes, it is true that Obama and Modi were eager to prove to the world that they have formed a bond, and the countless political gestures were taking up a lot of their time. It is also true that there are a lot of substantive issues on the plates of both leaders, such as trade and climate change, that warrant urgent attention.

In India’s political culture, symbolism and substance are, however, intertwined to a much greater extent than most observers assume. Political gestures that indicate India’s importance and the international recognition thereof influence the perceptions, priorities and decisions of New Delhi’s policy makers. Sky-high status ambitions have been a constant element of India’s foreign policy. The country’s first prime minister, Jawaharlal Nehru, even claimed a superpower status akin to the roles of the United States and the Soviet Union before India became independent. Atal Bihari Vajpayee––Mr. Modi’s pre-predecessor and a fellow member of the Hindu-nationalist BJP––promised “to regain India’s lost pride” by building up a nuclear deterrent. New Delhi’s self-image poses a real challenge to India’s negotiating partners, since statements, actions and decisions that seem to undermine India’s status ambitions are easily seen as offensive.

A recent case in point was India’s outrage over the arrest and strip-search of an Indian diplomat, Devyani Khobragade, in New York in 2013; the diplomat was later charged with visa fraud. Shortly after Khobragade’s arrest, India’s government decided to remove security fences in front of the U.S. embassy in New Delhi, which exposed the diplomatic personnel to a much greater risk of a terrorist attack, and to confiscate the identification cards of several State Department officials. This incident powerfully proves that developments making India’s people and decision makers feel humiliated might easily have meaningful political consequences, even if that impression is not related to material interests such as wealth.

Since Modi’s election in spring 2014, the United States and India have emphasized their commitment to improving relations, but India’s status concerns are still fed by the American-spearheaded Trans-Pacific Partnership, a trade agreement that does not include New Delhi, and the lack of policy coordination with respect to Afghanistan’s future.

Against this backdrop, it was important to reassure India that America is sensitive to New Delhi’s role in the world and respects India’s traditions and achievements. At a time of bilateral engagement, the president’s visit has further contributed to creating a more productive working environment for negotiators from both sides. In addition, the inclination of Indian decision makers to take countermeasures, if they deem their pride to be hurt, should have lessened, which might prevent future setbacks.

This is not to say that cold-hearted interests do not matter; they do. The Modi administration’s interest in attracting new investments was central in overcoming the American-Indian impasse on agricultural subsidies in November, which had stalled negotiations among 160 members of the World Trade Organization. The same holds true for Sunday’s announcement to mitigate the effects of a very rigorous nuclear liability law, which has deterred Western companies from investing in India’s nuclear sector.

But overlapping interests have too often been an insufficient basis for making progress on key policy issues, because India felt sidelined and distrusted American initiatives. It will be important to avoid similar problems when both countries address their seemingly intractable differences on India’s protectionism and greenhouse-gas emissions. The short era of unprecedented bilateral cooperation that was facilitated by Bill Clinton’s visit to India in 2000, which also included highly symbolical steps, should inspire decision makers from both countries not to drop the ball.

Sven-Eric Fikenscher is a research fellow with the International Security Program and the Project on Managing the Atom at Harvard University's Belfer Center for Science and International Affairs.