Pompeo in Pyongyang: Yet Another Nothingburger in Trump’s North Korea Diplomacy 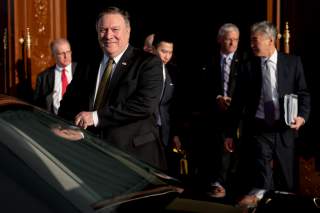 American Secretary of State Mike Pompeo recently returned from North Korea on his latest effort to cajole the North into some manner of denuclearization. Unfortunately he returned with nothing, yet again. This is now becoming a pattern in this year’s American and South Korean outreach to North Korea.

South Korean president Moon Jae-in has met with North Korean leader Kim Jong-un twice this year. President Donald Trump took the unprecedented step of meeting Kim in Singapore last month, a first for a U.S. president. And Pompeo has gone several times and appears to be planning to try yet again.

In each case, the North has not agreed to any manner of timeline or specific details for denuclearization, inspections, biological and chemical weapons disarmament, conventional force withdrawals along the demilitarized zone between the two Koreas, and so on. Nor has it given even any details about what materials it has. Outsiders still do not have even the shape of the nuclear and missile programs—how many nuclear warheads, how many missiles of what ranges, how many launchers, how many centrifuges, how many kilograms of plutonium and highly enriched uranium, what safety, and command and controls protocols, and so on.

Conversely the North Koreans have captured prestige gains, particularly from the meeting with Trump in Singapore. North Korea is a small, backward country irrelevant to the global economy. Were it not in the middle of such a dynamic, fast-paced region, no one would care about it. Yet it, unlike any other rogue state in the world, commanded an audience with no less than the president of the United States. And we know now that the North Korea advance team in Singapore put a lot more work into the optics and artifice of that meeting—insuring that Trump and Kim met on equal-appearing terms—than the technical groups actually discussing the relevant weapons.

To be sure, both sides have swapped small “favors”—the North has not tested a warhead or missile since the start of year, and it released U.S. hostages; the United States has cancelled this August’s Ulchi Freedom Guardian military exercise. But these are minor trades and easily reversible. They do not get to the heart of the controversy—the nuclear and missile programs in the North and the corresponding effort by the international community, led by the United States, to isolate and sanction North Korea for these efforts.

Going forward then, Pompeo needs to extract from the North Koreans several minimal steps to insure that this process is worth continuing. It is clear now that CVID (complete, verifiable, irreversible denuclearization) or FFVD (final, fully verified denuclearization) is not going to happen for a long time, if at all. Instead, let’s start with low-hanging fruit:

The fourth element of the Singapore declaration is the return of the remains of U.S. soldiers missing in action from the Korea War. While this is morally important for the affected families, this is not a strategic concession and should not be difficult for North Korea to comply with politically (although the technical issues may be a challenge).

It is mark of just how poorly Pompeo’s latest visit went that he could not even get this. As the easiest element of the Singapore declaration, this is a trial balloon of the North’s intentions.

Yet another unhappy outcome of the latest meeting is the North describing the talks as “regrettable” and “gangster-ish.” This is disturbing, because it would have been easy for the North Koreans to simply say nothing. Pompeo gave a fairly anodyne judgment, talking about “productive” meetings and “more work to be done.” He announced no breakthroughs and used no florid, Trumpian language. Yet the North punched back anyway.

Going forward, if Pompeo cannot even leave a working-level meeting with the North—Pompeo did not meet Kim—without this manner of language, then that is a pretty strong indication that either the United States is making extraordinary demands or that the North is not willing to budge on the strategic issues.

As mentioned above, if the talks are to move toward denuclearization, which Trump insists Singapore set in motion, then at minimum, we need to get a reasonable sense of what they have. United States and South Korean intelligence have guesstimates. Those could be matched against what the North Koreans tell us so that we might begin to have a sense of the shape and dimensions of the problem.

Without this information, any kind of denuclearization is impossible. We would have no idea if they had ten warheads or sixty (the usual estimates thrown around) or more, making it impossible for us to judge if the North was meeting its commitments. I would guess that this was one of Pompeo’s demands in Pyongyang, as all else is premised on it. Again, it shows what a nothingburger this meeting was that we could not get even some movement on this, without which no next step is possible.

This is the highest of the low-hanging fruit. Once we have a sense of what they have, then we could begin to sketch a timeline of how and when it would be dismantled. The North Koreans could then ask us—as they most certainly will—for counter-concessions for each step. This would ignite the real negotiations of give-and-take. Certainly the process will take a lot longer than the preferred Trump timeline set around the upcoming U.S. midterm and presidential elections, but at least we could have a window to work with. (I would guess the North would ask for a ten- to fifteen-year process.) Again, Pompeo seems to have gotten nothing on this.

The secretary deserves credit for trying. The risks of conflict with the North are so high, that talking to them is usually a good choice. But Trump continues to insist that something like CVID is at hand, and Pompeo is in a terrible bind, because he likely knows that this is untrue. Kim refused to even meet with Pompeo, suggesting that now, post–Singapore, Kim will only meet with Trump himself. Were Trump to do that, with a rumored White House visit this fall, then it would only normalize North Korea even further, with still no clear denuclearization movement. How much longer can the Trump administration speak as though this is going well?