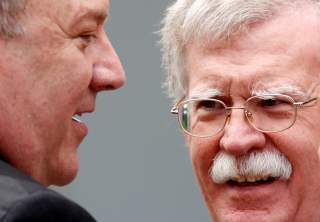 Pompeo’s upcoming visit will be the make-or-break moment in President Trump’s campaign to disarm the militant regime of Kim Jong-un.

When Pompeo returns, the world should know whether the Trump administration’s fundamental assumption—that Kim has made a strategic decision to give up his nuclear arsenal—is correct.

If that assumption is not correct—and at this moment it does not appear to be so—then Trump will have to do something he jokingly said in Singapore that he would not do: admit he was wrong about the North Korean leader.

Unfortunately, it appears the president will make no such admission. Instead, it looks like he has chosen to retreat, backing away from demands that the North give up its most destructive weapons.

At the moment, color Pompeo optimistic. “For decades, the North Korean leadership—Chairman Kim, his father, and grandfather alike—believed the nuclear program was their security out; it provided them with regime stability and security,” he said to Hugh Hewitt during his MSNBC interview conducted June 22. “And we’ve now flipped that narrative. I believe we have convinced him that that nuclear program, in fact, presents a threat to him and that giving up that program is the path towards a brighter future for the North Korean people.”

The deal with North Korea, Pompeo said, is that Kim will “fully denuclearize” and permit verification in return for “security assurances.”

In response to Kim’s perceived good will, Trump and Pompeo have made several gestures of their own. First, Trump indefinitely suspended large-scale joint military exercises with South Korea. Second, the administration since the end of May has been holding off designating almost three dozen entities, significantly, some of them Russian and others Chinese, for violations of North Korea sanctions.

The American concessions are especially significant. Take the suspension of the military exercises, what Trump called “war games.” Trump made that move without getting a reciprocal promise from Kim to suspend his military’s drills. As a result, the Korean People’s Army will go ahead with its summer training cycle and the U.S. and South Korean forces will forego the crucial Ulchi-Freedom Guardian exercise in August.

If the suspension of the American-South Korean exercises lasts, say, a year, there will be a substantial erosion in readiness and the alliance will start to become hollow. The United States and the South will still be able to repel an attack from the North, but casualties, both military and civilian, will be far higher.

The decision to hold off the naming of new sanctioned entities will also have adverse consequences. Pyongyang changes front companies all the time, so not designating new ones undermines the sanctions effort quickly. Once Kim believes he has gotten around the American and international prohibitions, Washington’s leverage in “denuclearization” negotiations rapidly declines.

While Trump is permitting Pyongyang to avoid sanctions, he is allowing Beijing to blatantly violate them. The forecast, therefore, is for even more brazen Chinese conduct.

These two Trump concessions—suspension of exercises and nonenforcement of sanctions—mean time is now on Kim’s side.

And time is on the North Korean’s side for another reason. Instead of stopping production of weapons—what we’d expect if Trump were right about Kim’s intentions—the regime in recent days has continued making improvements to its plutonium-producing reactor and other facilities at Yongbyon; it has at various undisclosed sites increased production of nuclear fuel; and it has been finishing construction at the Chemical Material Institute, which makes parts for solid-fuel ballistic missiles. Furthermore, U.S. officials say the North is attempting to hide warheads and whole facilities producing fissile material.

And there is one thing Chairman Kim has not done. Despite what Trump said at his post–summit press conference in Singapore, the boy dictator has not destroyed “a major missile engine testing site.” U.S. officials have subsequently identified that site as the Sohae Satellite Launching Station.

It was right for Trump to give Kim a chance to make an historic decision to give up his weapons, but the forty-fifth American president should not give the third Kim dictator too much time.

In fact, Trump recognized that Kim’s opportunity should be limited. “I feel that Kim Jong Un wants to do something great for his people,” the president said while in Quebec for the G-7 meeting early last month. “And he has that opportunity, and he won’t have that opportunity again.” Trump called that chance a “one-time shot.”

Call that a two-time shot. Kim at the June 12 summit did not make a specific commitment to give up his arsenal. Instead, he signed a vague Joint Statement in which he pledged “to work toward complete denuclearization of the Korean Peninsula.”

So Pompeo’s visit gives Kim his second opportunity. If Trump and Pompeo are correct that Kim has decided to surrender weapons, then there is no reason for Kim not to make those commitments, fix a specific timetable for disarmament and dismantlement, and agree to an intrusive inspections regime.

If Pompeo does not come back with commitments, timetable, and agreement in hand, then why would we ever expect Kim to turn over weapons? And that would mean the basis of Trump’s policy is incorrect.

In that case, the president and his secretary of state need to go back to the tactics that were successful in getting Kim to the bargaining table in the first place: the “maximum pressure” campaign.

And they need to do this quickly as Sung-Yoon Lee of Tuft’s Fletcher School pointed out Wednesday to the National Interest. “Does the administration ever consider the more than likely possibility that protracted talks, which always entail loosening sanctions, only enable North Korea to buy time and money with which to perfect its own nuclear posture, that is, further advance its fast-growing lethality?” he asked.

Instead of pressing Kim, however, administration officials are talking about the possibility of a second Trump-Kim summit, this time in New York in September at the time of the UN General Assembly meeting.

Talk of a second summit, which would further boost Kim Jong-un’s standing, is premature. Yet it is no surprise that American officials are thinking this way. After all, the president is sunny side up. As the Washington Post correctly noted on Tuesday, “Trump has offered exuberant assessments about progress with North Korea for weeks.” The president famously tweeted on June 13 that the North no longer posed a “Nuclear Threat” to the United States. In his tweet Tuesday, he declared this: “Many good conversations with North Korea—it is going well!”

Moreover, Reuters is reporting that the administration is no longer insisting that Kim give up weapons now. In a softening of its stance, it is agreeing to what it said just two months ago it would not do: accept a phased and long process of disarmament. Instead of going for CVID—complete, verifiable, and irreversible denuclearization—the administration appears willing to settle for “mutual threat reduction.”

President Trump late last month seemed to confirm the rumors of retreat when he compared negotiations with North Korea to slow cooking a turkey. “And so, we have things cooking now,” he told a rally in Fargo, North Dakota. “But when people rush it—you know, it’s like rushing the turkey out of the stove. It’s not going to be as good.”

Cooking large items of poultry takes time; negotiating with North Koreans is best done quickly. It is now or never for the administration, and Pompeo’s trip will reveal whether Trump’s effort to disarm them is on the brink of failure.