Populism Has Ushered in an Age of Deglobalization 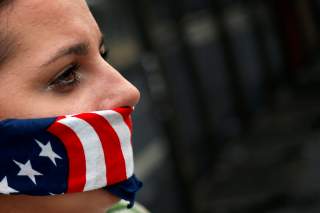 Some time ago I was invited to a conference in China titled “The Harmony of Civilizations and Prosperity for All: Values and Order in a Changing World.” This theme presents a serious challenge to those studies of world politics and its philosophical interpretations, that, despite all the vicissitudes of the twentieth and early twenty-first centuries, have not completely lost the historical optimism that so strongly characterized the nineteenth century.

My own understanding of harmony is closely related to the immortal words of the ancient Greek philosopher, Heraclites, who said: “What is in opposition is in agreement, and the most beautiful harmony comes out of things in conflict—and all is born from strife.”

If we look at the modern world, we see that the condition of “all born from strife” is clearly ascendant, and that “the various hues” Heraclites mentions are now very much at odds and far from achieving any form of “beautiful harmony.”

It so happens that the word “harmony” appears with increasing frequency in the works of political analysts and the agendas of prestigious international forums. At the recent Valdai Club meeting in Sochi, which Russian president Vladimir Putin attended, this pleasing and agreeable word turned out to be one of the key terms used. In Beijing the deeper significance of this term—“harmony”—was explored.

Why is that true?

Perhaps because the chaos resulting from the breakdown of the so-called “bipolar world” at the end of the last century is becoming increasingly dangerous, and therefore it is more intolerable for those who consider an orderly world to be the benchmark of harmonious relations. This chaos finds expression in numerous areas and at many levels.

Events of the second half of the twentieth century clearly demonstrated the futility of a global order based on a one-dimensional ideological confrontation sustained by a standoff between equally powerful nuclear forces. That “bipolar” world began disintegrating from the moment of its formation. It is sufficient in this regard to recall the conflict between Stalin and Tito and Yugoslavia’s withdrawal from the other socialist states. This was followed by the still more intense Soviet-Chinese controversy. As for those in the “opposite camp,” French leader Gen. Charles de Gaulle withdrew himself and his country from NATO’s military structure.

The intermediate stage between this illusory bipolar harmony and the very real chaos of the present was the so-called “strategic triangle” configuration formed in the late 1960s and early 1970s after Henry Kissinger’s historic visit to Beijing.

Before long, however, other centers of power and influence came into play. The world, according to many analysts, was becoming multipolar.

Many observers were optimistic about the process, seeing the emergence and growing influence of these other “poles of power” on the international arena as providing a more stable and long-lasting foundation for world order. However, it has become increasingly obvious during this opening stage of the twenty-first century that there is little basis for such optimism.

Advances in technology, new forms of warfare, the risk of nuclear proliferation, and the blurring of the line between war and peace—through the actions of governments as well as non-state players—are transforming the multipolar order into a more disorganized and chaotic world before our eyes.

The world seems to exist on two separate planes. On the surface, we have created a highly complex and rational world order. It includes such leading international political structures as the United Nations, the World Bank and others. Each has its basic legal statutory documents. There are also firmly established regional and subregional structures. Institutions focused on various aspects of human activity work unceasingly towards their objectives. It gives the impression that the world is, if anything, overly organized on that level. And I understand observers who are inclined to regard these multitudinous organizations of the world bureaucracy as nearly autonomous structures that simply spin their wheels without solving the real problems humanity faces.

As a result, not only do the world’s most pressing problems remain unresolved but, as the chaos deepens, they fall victim to unscrupulous and meaningless compromises. Amidst this chaos and Brownian motion, the winners are far from always the strongest—in the traditional sense of that word. We now confront the most recent and vivid example of how a rather second-rate blackmailer can achieve a brilliant victory and imposes his will on a number of the traditionally most influential states of the world—as each quietly tries to defer the problem to the others and avoid handling this increasingly “hot potato.”

The long-term effect of this failure is obvious—a deepening chaos that has given rise to more than one dangerously willful and reckless modern-day Herostratus.

The growing entropy of the world order is closely connected with important changes in the post-industrial and, as some believe, post-technological world.

Many countries and regions of the world are witnessing a growth of national conservative populism fueled by a variety of economic, social and political-ideological causes. There is a deepening of conflicts and tensions within societies in different countries and continents, and zealous politicians point to global and macro-regional problems to exploit these tensions and gain political capital.

The United States, to our surprise, has given us the “Trump phenomenon.” He and his team, with a blunt frankness so characteristic of many Americans, have expressed the sentiments of a vast number of their compatriots—an electorate that clearly does not care about the rest of the world if solving that world’s problems in any way negatively affects its pocketbooks.

Traditional U.S.-style conservatism is a peculiar combination of international isolationism and an unceremonious approach to others. Of course, neither current or past Washington administrations can afford a complete return to the past. But the U.S. Big Brother does have the luxury of indulging his own dissatisfied citizens for a time while instilling fear in the hearts of America’s junior partners abroad. Such actions, however, have major repercussions in the rest of the world.

Meanwhile, the conflict is escalating between the “strong” and “weak” members of a greatly distended European Union. Moreover, the propaganda of both groups manifests itself according to the same neotraditional ideology. “Brexit” activists in Great Britain, right-wing opponents of Angela Merkel in Germany, and Euro-skeptics in Poland, the Czech Republic, Austria and Hungary constantly refer to some “Golden Age” of the past.

In the Islamic world, the most active voices appeal to the “true values” of fundamentalist Islam and a readiness to sacrifice one’s own life and the lives of others in the name of an “ideal Muslim identity” that ostensibly existed in some more or less distant past.

My own country is also witnessing a growing influence of neoconservative sentiments. As the quest for a national identity actively looks to the past for answers, the debate primarily hinges on which bygone historical period can rightly be considered the most ideal.

Of course, our Chinese friends are the best judges, but our sinology experts suggest that recent publications in your country indicate that Beijing is devoting a great deal of attention to the same issue. It would be very interesting to learn about this in more detail.

This calls to mind another part of that wise aphorism of Heraclites—namely, that “the divergent converges.”

Indeed, if similar social and political processes are underway among disparate cultures and traditions in distant countries and continents, then this apparently is a global phenomenon.

One of the main components of this worldwide trend is a greater focus on resolving domestic problems with domestic resources and approaches, and less of a focus on coordinating efforts with other countries and macro-regionalization—and still less on globalization. Even this process, in a paradoxical way, is global in nature. Apparently, all of humanity is reordering its values and priorities.

Individuals, countries, and humanity as a whole generally take refuge in tradition and erect defensive barriers when experiencing deep uncertainty about the future, which then prompts them to exhibit a sense of danger and alarm. Slogans such as “Make America Great Again” and “Give Great Britain Back its Identity” indicate that those societies feel extremely distressed and on the brink of losing something of existential importance.

There is good reason for these fears. The world is undergoing radical changes—more profound, perhaps, than at any time in its history. Underlying the relatively understandable economic, demographic, and migration processes are new and far less familiar changes in the global order.

What should be done about the practically unavoidable proliferation of nuclear weapons? How does one respond when advances in armaments, information systems and biotechnology place secondary—and even minor—players on equal footing with the major powers, thus transforming the oligarchic system of international relations into one of ochlocratic disorder? And beyond all of that looms the prospect of a new and widening gap between progress and humanism, a dilemma caused by major advances in artificial intelligence. This already gives rise to the question: could man and his creation coexist harmoniously in the same civilization?