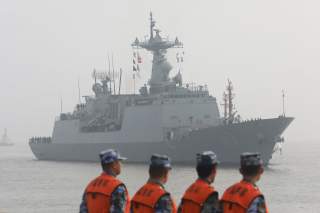 TAIPEI — Those focusing on whether China can sink a U.S. aircraft carrier or lob missiles at Guam are missing the larger problem. And it is not about the tragic loss of a democratic friend in Asia.

The nightmare is how the strategic landscape will radically change if China controls Taiwan, either by political or brutal force.

China views Japan, Taiwan and the Philippines as one long wall. Bud Cole, the celebrated specialist on Chinese naval issues, dubbed it the “The Great Wall at Sea” for good reason. Insurmountable in geographic terms; with no line of sight for its aircraft, let alone navy, Beijing has no other choice but to take Taiwan.

Taiwan’s central mountain range runs the length of the island with heights ranging from nine thousand to twelve thousand feet. This is the problem China faces in its efforts to project force into the Pacific. The Chinese air force must fly around Taiwan, the navy must sail through the Japanese-controlled Ryukyu Islands chain that stretches from Japan to Taiwan, and mainland’s ground-based radar cannot peek over Taiwan.

The occupation of Chinese military forces on Taiwan would basically turn the tables on the United States. The “wall” would now be a U.S. problem in terms of line-of-sight.

China has radically shifted the power balance in the South China Sea with the same island occupying philosophy. Islands are taken, then armed, and territorial lines are expanded via dubious “legal” declarations, such as exclusive economic zones, fishing grounds, historical claims that go back hundreds of years.

The declaration of an Air Defense Identification Zone (ADIZ) is only a matter of time for both the South China Sea and eventually Taiwan airspace. Taiwan’s fighter capabilities are not being renewed at a rate to stop Chinese advances in fighters and electronic warfare. Even if Taiwan procures new F-16Vs it will still face a significant problem in air power projection as China increases fighter patrols that are performing circumnavigation patrols of the island.

If Taiwan fell tomorrow, the Chinese navy could use the northeast naval base of Suao as a submarine base. Not just any ordinary base, but a far better one than Yulin Naval Base on Hainan Island, where Chinese nuclear submarines leave their mountain cave facilities to enter the shallow waters of the South China Sea. At Suao the waters off the coast drop into the abyss, giving submarines a far better ability to drop below thermal layers and vanish.

Though Suao is a medium-sized port it is where the 168th Flotilla corrals six Knox-class frigates, ten Perry-class frigates, and four Kidd-class destroyers, along with a logistics hub.

The rear side of the base has a high-pitched mountainous backside that could be carved out for submarine tunnels like Yulin. Most of Taiwan’s eastern coast is rugged mountains that push directly into the ocean.

The second base of great envy by China is Taiwan’s Hualien Air Force Base, which is the home of the 401st Wing with three squadrons of F-16 fighter aircraft. Located just south of Suao, the base has a “nuclear proof” bunker carved out from the inside of Chiashan Mountain. Having been one of the few Americans to get inside the enormous facility, it struck me as something from a James Bond movie (minus the Ninjas repelling from the ceiling).

Only one other airbase uses a catacomb of underground facilities and that is Taitung on the southeast coast. The base’s Shihzishan (Stone Mountain) is not as big as Chiashan Mountain but can house around three fighter squadrons during an attack. At present, the base is home for the 737rd Tactical Combined Wing’s F-5 Tiger fighter aircraft used for training.

Both airbases could be home to China’s fighter aircraft, such as the J-11/J-15/J-16, all with a range of two thousand miles and a combat range of half. This does not include the use aerial refueling to increase patrol time. China is planning a refueler variant of its new Y-20 strategic airlifter, which would extend their patrol time and range.

The occupation of these three bases on Taiwan’s east coast—Suao, Hualien, Taitung—will force United States and Japanese naval forces to face Chinese air power projection directly for the first time in the Pacific.

One should not ignore Chinese forces on Taichung Air Force Base and Kaohsiung Naval Base on Taiwan’s west coast. Both would be dream bases for H-6K bombers and Type 055 destroyers, respectively.

Once China establishes military bases on the island, then the Taiwan Strait could be closed to commercial traffic at Beijing’s whim for either political, economic or military agendas. Middle East oil and gas traveling up the Taiwan Strait and the eastern coast to Korea and Japan would be under China’s strategic umbrella.

Japan and Korea would have to consider tailoring its foreign policies in Beijing’s favor. This could be done in a variety of ways, such as voting in China’s favor in the United Nations, closure of U.S. military bases, accept Beijing’s trade rules, etc.

U.S. intelligence losses would include the hobbling of the Japanese Fishhook sonar program that Taiwan also participates. Fishhook is a series of sonar stations along the Ryuku Island chain from Japan to Taiwan.

Added shuttering would include the U.S.-Taiwan signal intelligence facility at Pingtun Li on Yangmingshan Mountain. Not to mention intelligence collected from other antenna facilities around Taiwan, including Linkou and Betel Nut Village. All of which have provided enormous value to U.S. National Security Agency and Pacific Command.

China views Taiwan as nothing more than a rock to occupy. China is using the same island-hopping mindset in the South China Sea that the United States used during World War II in the Pacific. That is the kind of thinking Beijing uses to justify its motivation to expand its military power. Perhaps the United States should rethink its strategy in Asia in the same terms.

Wendell Minnick is an author, commentator, journalist and speaker who has spent two decades covering military and security issues in Asia, including one book on intelligence and over 1,200 articles. From 2006–2016, Minnick served as the Asia Bureau Chief for Defense News, a Washington-based defence weekly newspaper.