Postwar Problems: Japan's Efforts to Forge a Peace Path with Russia Could Be Waylaid by the Coronavirus 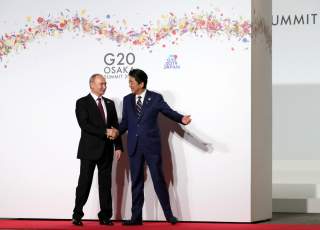 Japanese prime minister Shinzo Abe’s seven years of diplomatic odyssey with Russia totaling over twenty-seven summits with Russian president Vladimir Putin has solidified his legacy as one of the most indefatigable champions of warming the frozen peace in the Far East. Less diplomatically, many in Washington have called him naïve, yet at a national rally last month, Abe hinted at his renewed commitment to Russia and shortly thereafter confirmed another summit with Putin on the sidelines of the seventy-fifth Victory Day in Moscow on May 9 that has been underreported and under the radar despite the broader implications. Although having achieved virtually no progress over the four southern Kuril Islands disputed by Japan, Abe remains determined to pull off a historic peace deal with Moscow before his term expires in September 2021. In fact, Abe’s enigmatic diplomatic waltz with Putin paradoxically reflects his oft-unrecognized strategic acumen with which he now finds himself increasingly having to grapple with overwhelming geopolitical forces.

Abe’s peculiar approach to Russia has eluded many with his unabashed display of unrequited bromance with Putin, while its real significance lies in his relentless preservation of Tokyo’s diplomatic channel with Moscow. Indeed, it has weathered the same geopolitical vicissitudes engulfing Russia and the West ranging from western sanctions against the country to the wars in Ukraine and Syria. This outcome alone is unprecedented given decades of bilateral inertia often caused by external factors, such as Washington’s interference in the 1956 Soviet-Japanese peace talks which virtually froze the territorial question indefinitely.

While 1956 confirmed Japan’s subordinate position in the Far East’s great power politics, 2020 may signal a new geopolitical reality in Asia. The present territorial issue is a direct consequence of great-power machinations rooted in the Roosevelt-Stalin secret pact at the 1945 Yalta Conference. The Cold War locked Japan in the U.S.-Japan alliance system that legally codified various structural constraints on Tokyo, effectively subordinating it to Washington’s will alone.

Indeed, Washington unilaterally preserves the right by virtue of bilateral treaty to deploy military assets anywhere under Japanese sovereignty, thereby rendering Tokyo de jure powerless in objecting to its great power ally. In other words, Washington would have the legal right to establish military bases on any of the four southern Kuril Islands returned to Japan, spawning perennial consternations for Moscow. Meanwhile, Japan’s embrace of its junior position has been a maximalist strategic solution to its minimalist national security posture enshrined in its pacifist postwar constitution, and even the unlikely event of a return of the four islands to Japanese sovereignty would not alter this fundamental reality. In short, the very territorial question itself has invariably been outside Tokyo’s influence, and the final act of Abe’s diplomatic spectacle demands him to cut the Gordian knot: to shelve or not to shelve the territorial question. In fact, if to recognize this strategic quandary surrounding Abe, Putin even proposed a conditional peace treaty in September 2018, which allowed for future negotiations on the islands.

Abe’s seven-year odyssey of diplomacy with Russia has increasingly exposed the fundamental contradiction of postwar Japan. Abe’s policy of “new approach to Russia” emerged in 2016 as a combination of legal coordination and economic diplomacy with Moscow in hopes for a territorial breakthrough despite their tactical significance. Added to this mix was his signature bromance with Putin, which produced a facade of strategic engagement and heightened public expectations for the Kremlin’s territorial concessions only to be betrayed summit after summit. What has grown obvious over the last seven years is that none of these maneuvers directly addressed the question of the U.S.-Japan alliance inexorably overshadowing the islands. Instead, Abe’s tactical gambits inadvertently induced Russia to zero in on the American elephant in the room, leading Putin himself to publicly challenge the alliance as the obstacle to peace. Ironically, this, along with Washington’s silence on it, was the best plot twist that Abe could have ever hoped for.

While many critics accused Abe of practically squandering seven long years and multi-billion dollar investment deals for zero territorial gains, the longest serving prime minister in Japanese history remained undaunted and resourcefully executed a paradigm shift in his engagement with Russia last year. After years of wavering over the islands, he suddenly pivoted to a de facto shelving of the territorial question itself at the 2019 G20 summit in Osaka by dropping any references to it during bilateral talks. His undeclared policy of “no mention” has increasingly become a fait accompli, unmistakably signaling to Moscow Tokyo’s emerging position acquiescing in a peace treaty without territorial resolution.

Perhaps even more significantly, Abe pulled off a snap reshuffle of the National Security Secretariat (NSS), leading to the September 2019 ouster of the veteran national security adviser, Shotaro Yachi. Yachi is a seasoned diplomat and architect of the Japanese prime minister’s multi-vector diplomacy that emerged during his second term beginning in December 2012. While perfunctorily dancing to the tune of Abe’s diplomatic waltz with Putin, Yachi continued to uphold the Ministry of Foreign Affairs’ (MOFA) traditional legalistic approach in support of Tokyo’s long-standing territorial position, leading to a growing competition with the Ministry of Economy, Trade, and Industry (METI)’s economic diplomacy agenda. The former national security adviser frequently clashed with Abe over the interpretation of the U.S.-Japan security treaty vis-a-vis the four islands and reached an irreversible schism with him when the prime minister himself reneged on the MOFA’s long-standing principle at the G20 summit last year.

The upshot is the emergence of Abe as Japan’s dealmaker-in-chief with a renewed approach to Russia, spawning far-reaching implications beyond the bilateral relations. Indeed, scarcely after sacking Yachi, the prime minister wasted no time in appointing Shigeru Kitamura, an obscure senior intelligence officer, as the Kantei’s new national security adviser. Due to his police and intelligence background, Kitamura’s appointment was tantamount to a political coup in Tokyo given the MOFA’s postwar monopoly on the country’s national security strategy. Indeed, the MOFA remains to this day the leading champion of the U.S.-Japan alliance system and functions as Tokyo’s chief counterpart for the U.S. Forces in Japan. Therefore, Abe’s quiet purge at the NSS has spurred an irrevocable shift in his Russia policy toward direct strategic engagement with the Kremlin while simultaneously disrupting the very foundation of postwar Japan’s foreign policy.

In fact, Abe’s renewed approach to Russia has already made tangible progress toward peace. Kitamura revived a direct channel between the two countries’ national security bodies suspended since the final days of Yachi’s tenure. He and his Russian counterpart, Nicholai Patrushev, reciprocated their contacts in Tokyo in September 2019 and in Moscow in January 2020 where Putin himself made a surprise appearance for a face-to-face dialogue with the fellow Japanese intelligence officer. The emerging Patrushev-Kitamura line is a significant upgrade to the fledgling bilateral security cooperation led by the 2+2 dialogue beginning in 2013, underscoring Abe’s vision for comprehensive engagement with Russia.

Kitamura’s growing importance in bridging the two capitals attests to Abe’s emerging art of the deal with Russia. The Japanese leader’s previous approach to Russia was at best tactical and at worst unfocused but it had the cumulative effect of inducing external pressure directly from Putin, who took delight in rebuking postwar Japan’s fundamental contradictions for perpetually impeding bilateral peace talks. Perhaps this was the envisioned endgame of Abe’s past strategy. Indeed, Abe was unusually quick as if on cue to execute radical internal reforms of his national security apparatus as soon as Putin mounted blames on the U.S.-Japan alliance. Whatever his agenda was, Abe has successfully combined direct strategic engagement with the existing economic diplomacy led by the METI while virtually discarding the option of legal resolution for the islands. In short, a peace deal, regardless of the fate of the islands, is now in clear sight under Abe and Kitamura.

While having consolidated his own domestic base in his drive toward peace, Abe still faces significant external geopolitical forces increasingly looking to frustrate his bid for a historic deal. Ironically, Russia has recently thrown a curveball as if to check the Japanese leader’s ambitions for the Far East by proposing a ban on territorial concessions for future constitutional amendments. If approved, the proposed ban would erode even the basis for Putin’s 2018 offer of a conditional peace treaty, undoing any prospect for territorial resolution. It would also be a snub to Abe’s own track record of engagement with Russia since 2013, although the proposed amendment does not include a ban on border demarcations, thereby leaving room for peace talks with Japan. What’s worse, the ongoing COVID-19 outbreak has already led to the postponement of the Chinese president Xi Jinping’s historic visit to Japan in April, auguring ill for Abe’s upcoming May summit with Putin in Moscow as well as subsequent bilateral talks during his term. An extraordinary combination of the Kremlin’s power play and viral outbreak is now simultaneously conspiring to test Abe’s statesmanship.

During the September 2019 Eastern Economic Forum in Vladivostok, Abe recited the nineteenth-century Russian statesman Fedor Tyutchev’s famous four-verse poem on the Russian national psyche in reference to Japan’s unwavering pursuit of peace in the Far East. It was also the Japanese prime minister’s own tacit admission that over the course of seven years with his Russian counterpart, he himself had become Tyutchev’s proverbial Russia that cannot be understood by mind but is something to be only believed in. His diplomatic drama with Russia has confused many, and his emerging plan for a Moscow summit in May looks almost certain to further stoke controversies at home and abroad even if it occurs unhindered by COVID-19. Yet, Abe has undoubtedly proved himself capable of outmaneuvering many of postwar Japan’s foreign policy shibboleths and is driving in earnest toward signing a peace deal with Putin. Can Abe really do it? Is the virus now the only obstacle for him? To believe or not to believe in Abe is the Russian riddle now confronting postwar Japan.