Power Struggle: Why Algeria's President Was Forced to Step Aside 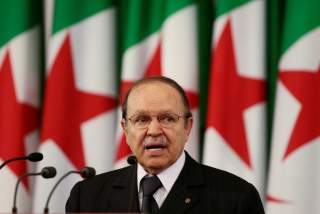 Algeria's President Abdelaziz Bouteflika resigned after six weeks of mass protests. Originally, the protestors demanded that Bouteflika abandon his bid for the fifth term, to which he gave in on March 26, but then quickly postponed elections in attempts to extend his rule indefinitely.

The resignation came after Algeria’s Army chief of staff, Lt. Gen. Ahmed Gaid Salah, renewed his call for an "immediate application of the constitutional solution," which he first voiced on March 26.

The constitutional Articles 7, 8 and 102 articulate the procedures for the transitional period during the presidency vacuum due to the death or resignation of the president.

While Articles 7 and 8 assure that “constituent power” belongs to the people who are the “source of all power,” Article 102 stipulates that "because of a serious and lasting illness infected the president, who is totally unable to perform his duties or in case of resignation, the President of the Council of the Nation shall assume the Function for a period of 45 days, in case of impediment of the Head of State."

Hours ahead of Bouteflika's resignation, fake reports published on social media and few prominent Arab media outlets, stated that the president fired a number of generals, including General Salah. However, later on, The Defense Ministry dismissed the announcement as “false and misleading news.”

General Salah repeated his demand for Bouteflika’s departure on Monday. There was resistance within the presidential palace, especially from Saeed Bouteflika, Abdelaziz’s brother, against the military’s demands. Observers point to Saeed as Algeria’s de facto ruler after Bouteflika’s stroke in 2013. Shortly after Bouteflika's resignation, unconfirmed news went viral on local and pan-Arab media outlets that Saeed Bouteflika has been arrested on corruption allegations.

During the last few days, newspapers close to the Algerian military, such as Echorouk Online, launched an offensive campaign against Bouteflika's entourage, including Saeed, and the former head of intelligence, Chief Gen. Mohamed Mediène Tawfiq. The newspaper alleged that the elites were plotting to keep Bouteflika as president until April 28 at which point, it planned to replace him with former president Alyameen Zorual and appoint Tawfik as the presidential security advisor.

Also, shortly after Bouteflika announced his resignation, the Algerian authorities arrested members of Bouteflika’s entourage, like Ali Haddad, Algeria’s richest man and funder of Bouteflika’s presidential election campaigns. At the same time, the military issued a statement pledging to track down those who sought to “destabiliz[e] the army.”

As it became clear that only substantial fundamental changes to the government structure and operation would satisfy protestors, the military has hesitated to intervene too much in the procedures for succession. The military intends on preserving its power and influence in the government, but it also recognizes that it has a shaky relationship with the Algerian people. The military is navigating a careful balance between supporting the people’s calls for real reforms and inserting itself at the right times to sway events in its favor.

As a final stand effort to avoid dragging the country into a scenario uncomfortably similar to the Egyptian coup of July 2013, Ali bin-Ali, head of the Algerian Republican Guard—a group constitutionally loyal to the presidency—participated in the chief of staff meeting, which concluded with a warning to President Bouteflika that he must step down and apply Article 102.

Currently, “Le Pouvoir,” the name of the ruling elite in Algeria who became the de facto leaders since Bouteflika’s brain stroke in 2013, has lost two of its main pillars: the businessmen and politicians, leaving only the Army. The military has consolidated power within the old guard. Its next challenge is to carry its role into the next government, which is unlikely to happen on the off chance the next president is chosen through free and fair elections.

Mulling in the minds of many is whether the Army will allow free and fair elections following the ninety-day transitional period. We have already seen one scenario play out in Egypt. The Egyptian Supreme Council of the Armed Forces (SCAF) governed the transitional period and allowed for free and fair elections, from which Mohammad Morsi assumed power. After a year, however, his defense minister, Abdel-Fattah el-Sisi, toppled him under popular pressure and out of fear that Morsi would restrict the military’s power.

An unlikely possibility is that the army will let the Algerian political reformists take the reins. However, constitutional reforms would likely result in a more limited military budget and influence, removing the military’s current freedom of operation under the cover of high confidentiality and lower transparency, according to Government Defence Anti-Corruption Index issued by Transparency International.

Most favorable for the military would be for it to install someone who is both highly respected by the public and sympathetic to the military. This person could be General Salah, who gained popularity after demanding Bouteflika’s resignation.