Powerplay: Why America Must Capitalize On Its Alliances in the Asia-Pacific Region 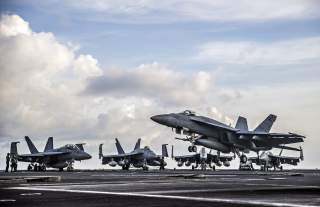 North Korea is the single largest threat emanating from the Asia-Pacific region today. In previous weeks, Pyongyang tested its first intercontinental ballistic missile (ICBM)—the latest in a string of missile tests and provocations since President Trump’s election. And the rogue Kim regime shows no sign of stopping.

This aggressive behavior makes our Asia-Pacific alliances critically important. President Trump seems to recognize this. Already in his young presidency he has met several times with Japanese prime minister Shinzo Abe. And during the recent visit of newly elected South Korean president Moon Jae-in, both countries reaffirmed the centrality of a strong alliance.

Cha’s central thesis is that there is a reason that bilateral alliance relationships (rather than multilateral-security arrangements established in Europe) took precedence in Asia. Namely, the United States was engaging in what Cha deems a “powerplay,” or “the creation of an alliance tie for the purpose of inhibiting the ally’s unilateral actions.” In other words, the United States recognized that in Asia, it was not merely pursuing a policy of containment, but actually constraining the actions of “rogue states” that might drag the United States into unwanted conflicts.

Cha focuses his analysis on three countries: Taiwan, Korea and Japan. He contends that, with all three, the United States sensed its partner had developed an overdependence on the alliance relationship and rather than pulling away, drew closer to these allies in order to exert greater control over their foreign and domestic policies. Indeed, he argues, the closeness of the alliance relationships has enabled the United States to exercise direct control over a variety of policymaking decisions.

A modern example of this theory in practice is the deployment of the Terminal High Altitude Area Defense (THAAD) system to South Korea. An advanced missile technology intended to intercept a North Korean missile in the event of an attack, THAAD remains a contentious domestic political subject in South Korea. Indeed, it became a central topic of debate during the snap elections held this year after President Park Geun-hye was ousted from office.

Whether the U.S. intentionally inserted itself in ongoing domestic political debates in South Korea or not, South Korea’s dependence on the United States for security gives Washington the ability to interject itself in political happenings on the peninsula. The same goes for Japan, the alliance relationship is always a consideration in domestic debates over security and military developments.

The U.S. today certainly does not view Taiwan, South Korea or Japan as rogue allies. The three cooperate either bilaterally or through multilateral-security arrangements that unite the allies to mitigate the threat posed by North Korea and China.

In an attempt to build enduring partnerships that mirror the United States, China, for example, is forced to develop parallel multilateral institutions that Cha contends do not compete with the existing U.S. bilateral alliances in Asia. Whether they compete with the United States or not, one must at least admit that the Washington’s development of a “hub-and-spokes” alliance structure places a rising China on the defensive rather than the offensive in Asia. China will be lucky to catch up to this unique advantage now enjoyed by the United States.

The Trump administration acknowledges the importance of U.S. alliances in Asia. It would do well to heed Cha’s advice on the effectiveness of these arrangements. As North Korea continues to threaten U.S. security, the administration should take extra measures to affirm its Asian alliances and act in a way that reassures its allies that America remains committed to these relationships, both militarily and economically.

Going forward, the United States should take heed of its past “powerplays” and use them to capitalize on the strength of its alliances in the Asia-Pacific region. It should also take advantage of the benefits afforded the United States as a result of its foresight and strong partnerships in Asia.

Olivia Enos is a policy analyst in The Heritage Foundation’s Asian Studies Center and specializes in human-rights issues and transnational-criminal issues.