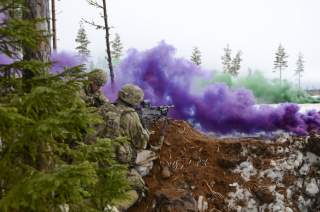 THE NEXT administration will confront the paradox of American power: unparalleled strength, but a deep disinclination to exercise leadership. This strength will allow the next president to inherit certain enduring advantages. No competing world power threatens American security. The United States remains the undisputed global leader in military, economic and diplomatic terms, and is likely to be for the foreseeable future. U.S. influence is enhanced by international institutions largely of America’s own creation that favor the rule of law, the free market and representative democracy, and a network of alliances with many of the world’s most powerful countries. The United States faces no global ideological rival that offers a more appealing alternative to a social contract based on individual freedom, economic opportunity and human dignity.

At the same time, the world today and America’s place in it are less certain than before. Europe’s inward focus has weakened Washington’s most important alliance. The eruptions throughout the Middle East in the aftermath of the Arab Spring have spread new misery across the region. The ranks of refugees and internally displaced persons have swollen to a post–World War II record of sixty-five million, half of whom are children. Three powers, China, Russia and Iran, seek to revise their regions through subversion and military force, intimidating U.S. friends and allies and undermining American credibility. A fourth, North Korea, continues to improve its nuclear-weapons and ballistic-missile capabilities unabated. The proliferation of terrorists, insurgents and other armed nonstate actors, some with global reach, have undercut the traditional state monopoly on the use of force. For the past decade or more, there has also been a menu of “new” security issues, led by cyberwarfare, but including climate change, infectious diseases, narcotics and human trafficking, and increasingly, natural resources, especially water.

Any choice on how best to promote security, prosperity and liberty is complicated by U.S. domestic opinion. There is a loss of confidence in Washington’s ability to lead, reinforced by public skepticism about an activist American role in the world and an increasingly polarized political process in Washington. Casting an especially long shadow are the expensive and highly unsatisfying wars in Afghanistan and Iraq. If the hallmark of a successful foreign policy is its ability to win domestic support, the application of sustained U.S. military force abroad—i.e., significant numbers of “boots on the ground”—seems to have priced itself out of the market.

In this threat environment, with these inherent strengths and stubborn constraints, what national-security strategy would best advance U.S. interests? We believe that a blended approach that draws upon elements of traditional strategies—hegemony, cooperative security and selective engagement—could preserve American strength, promote American interests and win sustained domestic support. These elements would be consolidated in a manner that might be termed “pragmatic primacy.” Such a strategy would resist the temptation to overreach based on America’s current strengths, but would not shy away from asserting its national interests and championing its values. It would prioritize ambitions, and ensure that rhetoric and resources are in balance with each other and are aligned with objectives. It would discriminate between making significant commitments to defend vital interests and using influence to promote preferences, and it would have the wisdom to tell the difference.

Pragmatic primacy would be based on the following principles:

America would not enter into new international commitments, but would honor existing ones, investing more time and resources into reinvigorating alliances and supporting friends around the world.

Short of a direct attack, America would not be the lead actor in any military conflict, but would deploy and sustain military force in supporting roles, working patiently with like-minded allies to counter insurgencies and preserve hard-won gains.

America would not impose its values on others by force of arms, but would vigorously champion respect for human rights, individual dignity and the rule of law.

America would appreciate that while the concept of humanitarian intervention may often appeal to its compassion, it is unlikely to be grounded in national interests or command the resources and time demanded to restore order and rebuild civil society.

America would continue to defend the global commons, especially freedom of navigation on the high seas, overflight rights, access to the Arctic and the demilitarization of outer space.

America would ramp up efforts to eliminate terrorist groups, while understanding that counterterrorism success will require patience and persistence for many years to come.

America would privilege its economic, military and diplomatic presence in the Asia-Pacific region, where the character of China’s rise remains one of the greatest unanswered questions of the twenty-first century.

With these principles in mind, how would pragmatic primacy work in practice in some of the key regions of the world?

AT HEART, Europe is experiencing an economic trial that masks a deeper political crisis. This crisis has raised fundamental questions over a shared European identity and common values that threaten the decades-long experiment in continent-wide integration. Brexit is but the latest example of this challenge.

As Europe has wrestled with ways to address the intertwined structural, political and economic challenges, a process that will take years to fully unfold, it has been hit by waves of refugees and immigrants escaping the violence and lack of opportunity in North African and Middle Eastern societies. This humanitarian crisis exposed the clumsiness of the EU’s consensus-driven decisionmaking and the inability to craft a common, EU-wide policy. At the same time, this influx has fueled a revival of xenophobia and right-wing nationalism, especially in those European states hardest hit by austerity measures. The United States has largely stood apart while these serial crises have unfolded.

A policy of pragmatic primacy would start by recognizing that NATO remains one of the most important military alliances in the world, that the French, British and Germans have significant military assets, and that the alliance needs America’s energy, ideas and leadership. But alliances change. It is time for Washington to raise the core questions that undergird all alliances: What is the common purpose? What special obligations do members owe each other?

As a practical matter, the members’ different threat perceptions make it unlikely to arrive at a consensus on a common purpose anytime soon. It is unrealistic for the United States to expect that Europe will reverse its decades-long decline in defense spending; it has surveyed the neighborhood and will not substitute America’s threat assessment for its own. Washington can push harder to encourage greater coordination, rationalization and interoperability among European defense establishments, shortcomings exposed during the 2011 Libya operations, but expectations should be tempered here, also. Hectoring them to ratchet up defense spending will only distract from important areas where collaboration is possible.

Europe’s most pressing need is counterterrorism assistance. European counterterrorism efforts need to be much better funded and more centralized, and the parties need to share more information, including financial intelligence, and do so in real time. Expanded police powers, with appropriate judicial and legislative oversight, are warranted. U.S. interests are at stake because of American citizens and businesses in Europe who are at risk and because of the threat the Islamic State and other terrorists pose to allies. The next American president has an opportunity to strengthen ties to Europe in ways that would be most meaningful to U.S. partners and enhance America’s security at the same time.

THE ARAB SPRING represented the most significant upheaval in the Middle East since the 1952 Free Officers’ coup overthrew Egypt’s King Farouk, installed Gamal Abdel Nasser and ushered in an era of militant Arab nationalism. Yet its initial promise has all but evaporated. The region is now home to more misery than at any time in living memory. Traditionally, refugees return home, relocate to a third country or are absorbed into the host state. None of that is happening today.

The consequences of instability in the Middle East are enormous. The region contains over 410 million people, with almost half under the age of twenty-five, at least 30 percent of whom are unemployed. It is the source of most of the world’s violent religious extremism. Not surprisingly, terrorism has metastasized in the Arab Spring’s aftermath. Islamic State volunteers in Iraq and Syria increased 300 percent in 2015 over the year before. U.S. intelligence agencies estimate that almost forty thousand foreign fighters have flocked to the region, representing at least 120 different countries. Each day, the probability increases that they will return home, armed with new skills and presenting a far more sophisticated danger.

The past few years of American diplomacy across the Middle East are littered with opportunities missed, roads not taken, and errors in both judgment and execution. Syria is a great example of policy adrift. There has been a serious disconnect between U.S. declaratory policy and actions; commitments have not matched rhetoric. The Obama administration called upon Assad to cease the violence, yet failed to mobilize adequate pressure on Damascus. Many of the options the United States had during the Syrian uprising were eliminated after the growth of the Islamic State (ISIS) and the intervention of Russia, Iran and its proxy, Hezbollah; an estimated four hundred thousand Syrians have died so far. (One unanticipated consequence of U.S. policy has Russia reasserting itself as a major actor in the Middle East, a role it abdicated when Sadat kicked it out of Egypt in 1972.) It is no longer a question of what America wants (“Assad must go”). Rather, the issue is: How best can the United States promote its core goals within existing constraints?