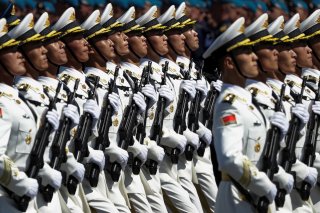 Xi Jinping paid a visit to a People’s Liberation Army (PLA) Marine Corps base in Guangdong Province this past Tuesday. During his tour the Chinese Communist Party (CCP) supremo exhorted marines to devote their “minds and energy” to “preparing for war,” to “maintain a state of high alert,” and to remain “absolutely loyal, absolutely pure, and absolutely reliable.”

Xi’s words set China-watchers in the West aflutter, but what do they mean?

Less and more than it might seem. As a rule, national leaders aim their remarks at more than one audience, and Xi is no exception to the rule. Let’s start with what he communicated to the immediate audience, the Chinese marines on hand for inspection, then speculate about the messages he broadcast—deliberately or inadvertently—to hearers elsewhere in China and the world.

In one sense Xi’s words were anodyne, even trite. Military forces exist to provide political leaders with options. To give political leaders options should they resort to war, armed services have to prepare for war in peacetime. That’s doubly true of industrial-age militaries. You don’t improvise a high-tech force at the outbreak of fighting. You develop and build implements of war, devise tactics and doctrine for using them, and train—over and over again.

In warfare as on the gridiron or basketball court, practice before a contest makes perfect. More reps make better habits and a more proficient team. Nineteenth-century psychologist William James paid homage to the part habits play in the profession of arms. James conjured up the Duke of Wellington, the victor of Waterloo, as an authority on the subject: “‘Habit a second nature! Habit is ten times nature,’ the Duke of Wellington is said to have exclaimed . . . . The daily drill and the years of discipline” transmute ordinary people into fighting soldiers, sailors, or aviators.

Executing tactics and operations becomes second nature. Such a force acquits itself well in battle.

Élan is critical to martial prowess. Only a skilled and dedicated wielder can extract maximum design performance from a weapon or piece of kit. To fulfill their duty, in other words, military folk must devote their minds and energy to preparing for war and maintain a state of high alert should they be ordered into battle. Xi was simply entreating the PLA Marines to do their job, not announcing that war is imminent. That’s the banal part.

Xi may have telegraphed an unintended message by entreating the marines to remain absolutely loyal, absolutely pure, and absolutely reliable. Few U.S. or allied leaders see the need to plead with troops to remain loyal; loyalty to the nation and its constitution is assumed. But the PLA is the military wing of a political party, not a society and its government. CCP grandees constantly hector the Chinese people and their military to remain subservient to party ideology.

That they feel the need to demand what confident leaders expect betokens doubt about the PLA’s fealty.

Military sage Carl von Clausewitz supplies a couple of tools for deciphering Xi’s message to audiences outside China. The main target audiences are Taiwan, an offshore island the Chinese Communist Party has vowed to make its own, by force of arms if necessary; the United States, Taiwan’s chief (if ambiguous) defender; and Asian and allied powers likely to oppose Beijing’s ambitions for territory and extraregional clout.

Clausewitz maintains that any warlike society can be broken down into three “dominant tendencies,” or components, namely rational subordination of military endeavors to policy; chance and creativity; and passion, in particular dark passions like fear, rage, and spite. It’s up to political leaders to ensure the armed forces serve political ends. Chance and creativity are the realm where gifted military commanders practice the art and science of battlefield strategy. And the populace is the primary locus of primal passions.

Again, rationality is the sphere of political leadership. By Clausewitzian logic no responsible political leader should take up the sword in a hopeless cause. It should forego the attempt, or extricate itself from the conflict if a once-viable cause becomes hopeless after battle has been joined. Nor, by Clausewitzian logic, should a contender overspend on its political goals. How much the leadership desires its goals governs how much it spends measured in lives, military hardware, and national treasure to obtain them, and how long it keeps up the expenditure.

Things have been tense in the Taiwan Strait of late. Look at Xi’s message to Taiwan’s government, military, and people through these lenses. The message is straightforward: he wants to cow the islanders into submission, convincing them they cannot win and that defeat is a foregone conclusion should they balk Beijing’s will. His bombast signals not just that the PLA is an increasingly well-equipped force with more ships, planes, and missiles than Taiwan’s armed forces can match, but that mainlanders will fight with skill and zeal.

A rational leadership should lay down arms and accept subjugation rather than resist an unbeatable foe. Clausewitz would instantly recognize Xi’s rhetorical methods. He wants to overawe an opponent into surrender, much as China’s rulers have striven to do since the age of Sun Tzu.

America is more interesting as a target audience. Return to the Taiwan Strait once again. To oversimplify, Beijing has constructed forces to slow down and weaken U.S. reinforcements as they cross the Pacific to join with sea, air, and land forces based in Guam, in Japan, and elsewhere around maritime East Asia. Xi may or may not believe he can persuade U.S. political leaders, the armed forces, or the American people the PLA would defeat U.S. forces outright. He can try to persuade them U.S. forces would reach the scene of action too late and too feeble to accomplish their goals. In which case, what’s the point of offering battle?

If successful Xi could convince Washington not to make what looks like a fruitless attempt to succor Taiwan.

And then Xi can try to manipulate U.S. perceptions of how much it would cost to repel a cross-strait assault against the island. The narrative goes something like this: it may remain possible for U.S. maritime forces to achieve their goals vis-à-vis Taiwan, but even if so, America will pay a penalty for success—perhaps a heavy one. Xi can ask Americans, sotto voce, how much they’re prepared to pay for the independence of a small island inhabited by just 23 million people and lying permanently under the shadow of a giant enemy’s seacoasts.

If they don’t care enough to sacrifice for Taiwan’s independence, Clausewitz would advise them not to make the outlay.

And even if they do care enough, the opportunity costs could prove severe. The U.S. military is already strapped for resources trying to police the Indo-Pacific, and this is peacetime. If the United States lost a sizable fraction of the U.S. Pacific Fleet and affiliated joint forces in a contest in the Taiwan Strait—even a triumphant one—its capacity to retain its superpower standing and preside over the liberal maritime order would be diminished. It could win locally but lose globally.

So again, Xi can ask U.S. political and military leaders and the electorate: what’s it worth to you? An indifferent, distracted, pandemic-riven society might decide Taiwan is not worth the effort when balanced against competing priorities—all of them compelling.

Clearly, then, Xi Jinping has much to gain from touting China’s burgeoning military might and the virtues of those who march under its banner. A long-dead Prussian helps us interpret the CCP chieftain’s words—and ponder strategy of our own.

James Holmes is J. C. Wylie Chair of Maritime Strategy at the U.S. Naval War College and the coauthor of Red Star over the Pacific. The views voiced here are his alone.