The Prequel to the Cold War 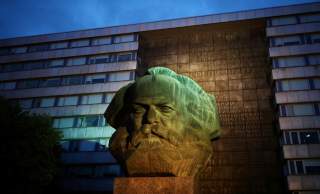 Even today, thirty years after the fall of the Berlin Wall, there is an abundance of interest in the Cold War’s multifaceted history.

But most people don’t know that there was a prequel to the war between two ideologies: communism and capitalism. It was launched in the British capital, which, after the Revolutions of 1848 debacle, became a safe haven for many European revolutionaries. That year two German immigrants: Karl Marx and Friedrich Engels published The Manifesto of the Communist Party (one hundred copies were printed in German). They were two ambitious social scientists who intended to change the world by the forcible overthrow of all existing social conditions. At the same time, their Communist doctrine (“Marxism”) has essentially opened “the Second Front” in the fight against anarchism, which at the time represented the real danger to the existing world order.

As it was expected, legal activities of the “Marxism scientific lab,” like those of other significant immigrants’ groups, were under the watchful eye of the political police. Essentially, the analysis was focused on potential political-economic challenges to the British national security and real threats for its continental rivals, which was of a great deal of interest for the Foreign Service’s analytical department.

However, the “Marxism” failed to make an impact on the revolutionary situation in the continent. Anarchist leader Mikhail Bakunin wrote: “the famous manifesto of the German communists, composed by Marx and Engels . . . had passed by the German people almost without a trace.”

This assessment can be verified by the Marx family situation, whose members suffered from malnutrition and diseases until the very death of misunderstood genius. Curiously enough, Marx family was saved by the New York Daily Tribune. John F. Kennedy described this story in one of his speeches.

Since 1851, the New York Daily Tribune regularly published articles signed by its London correspondent Marx though often written by Engels.

However, in 1862, when the Civil War erupted in the United States, Americans lost interest in European politics.

The crowning achievement of “Marxism” was the London edition of das Kapital first volume in 1867. It was an outstanding academic work, which argued that the revolution in Great Britain was unviable and warned about possible proletarian revolutions in less developed nations of Europe.

However, the only large revolutionary development on the continent was the anarchic revolt of 1871 in Paris, known as the Commune of Paris, had nothing to do with the “Marxism,” though Marx and Engels while ignoring the facts were claiming credit for this unforeseen insurrection as the first case of the “proletarian dictatorship.”

In reality, the anarchic rebellion in Paris was, to a certain extent, a byproduct of the German General Staff policy (as was the Bolshevik rebellion of 1917 in Petrograd). However, Marx writings on France as well fifty-five Engels’ articles in the Pall Mall Gazette on French army and its secret plans, were intended to help Prussian victory in the war for “German independence.”

When talking about nineteenth-century prehistory of the Cold War, one can’t omit the story of the so-called Marxist International, which was recreated in Soviet Russia as the headquarters of the world revolution under the name of Comintern. It is well known Marxism stipulated the success of proletarian revolutions with neutralizing absolutist Russia’s influence on European politics. Therefore, the restoration of a Polish state as a buffer nation between Europe and Russia was initially declared the main goal of the working class’s foreign policy.

In order to achieve this goal, particularly after Polish uprising of 1863 in Russia, the International Workingmen’s Association known as the First International was established in London in 1864. However, Marxism failed to get the upper hand even in the International. In 1872, facing the imminent victory of anarchists Marx decided to move the General Council of the International to New York. Here the International met its logical end in 1876. In the United States, Marxism never found any significant support. Even the Manifesto of the Communist Party in English was published in the United States only in the late 1871 and not on the initiative of proletarians, but of two multimillionaire suffragist sisters, proponents of spiritism and the concept of free love, Victoria Woodhull and Tennessee Claflin, who published Woodhull & Claflin's Weekly.

The Marxist chapter of the Cold War prehistory was over with the downfall of the First International. But not the spectre of communism, which emerged with the first edition of the Manifesto of the Communist Party. After being banished by Bakunin from the shores of foggy Albion, this sinister phantom found its incarnation in the homeland of its persecutor. Thus, the communist idea was embodied in Russian passion, flesh, and blood. As Kennedy put it forth, “Marx . . . devoted his talents to the cause that would bequeath the world the seeds of Leninism, Stalinism, revolution and the cold war.”

In 1918, seventy years after the Manifesto of the Communist Party was published, the real Cold War began when Communist Russia declared war on the free world.

The first Cold War between the world bolshevism and the disunited West lasted until 1941 when the USSR became an ally of the United Kingdom and the United States in the anti-Hitler coalition. Stalin joined the Atlantic Charter and in 1943 he officially disbanded the Comintern.

After the end of World War II, the Cold War, as we know it now, erupted again. When the United States became the unconditional leader of the free world, President Harry Truman officially accepted the challenge thrown by the Bolsheviks in 1918. One hundred years after the Manifesto of the Communist Party was published, Truman, in his inaugural address, essentially declared the war to false philosophy of communism with contrary aims and a totally different concept of life” from that of democracy.

Looking back at the history of the nineteenth and twentieth centuries, one cannot miss the parallel between the historical roles of Mikhail Bakunin and Mikhail Gorbachev. Bakunin fought against Marxism and Gorbachev radically transformed the ideology of the Communist Party of the Soviet Union by proclaiming the priority of universal human interests and values over those associated with class, by championing the right of the people to free ideological choice and self-determination. Gorbachev formulated these revolutionary ideas in November 1987 in his anti-communist manifesto “Perestroika: New Thinking for Our Country and the World.” Not only did they save the world from nuclear apocalypses, but they also freed the nations of the communist bloc without shedding a single drop of blood.

Going back to the entertaining adventures of Marxism in the United States, one shouldn’t miss the document indicating that Marx’s illusions went as far as trying to bring President Abraham Lincoln over to his side. In 1864, when Lincoln was reelected, Marx addressed him with a letter. It stated that: “From the commencement of the titanic American strife the workingmen of Europe felt instinctively that the star-spangled banner carried the destiny of their class;” and that “the workingmen of Europe . . . consider it an earnest of the epoch to come that it fell to the lot of Abraham Lincoln, the single-minded son of the working class, to lead his country through the matchless struggle for the rescue of an enchained race and the reconstruction of a social world.”

Marx was not discouraged by the lack of response, and after the vile assassination of Lincoln, he wrote a letter to Lincoln’s successor Andrew Johnson, which ended with the sentence: “You will never forget that to initiate the new era of the emancipation of labour, the American people devolved the responsibilities of leadership upon two men of labour—the one Abraham Lincoln, the other Andrew Johnson.”

After realizing the futility of his appeals to U.S. presidents, Marx decided to address American workers directly. In an 1869 letter, Marx condemned the Republicans’ war preparations against Great Britain and pointing his finger at Russia, which was avidly desiring such a war. He wrote: “A glance at commercial statistics will show that the Russian export of raw produce, and Russia has nothing else to export, was rapidly giving way before American competition when the civil war suddenly turned the scales. To convert the American plowshares into swords would just now rescue from impending bankruptcy that despotic power which your republican statesmen have, in their wisdom, chosen for their confidential adviser.”

Sultygov Abdul-Khakim Ahmedovich is a doctor of political sciences, professor of Lomonosov Moscow State University. He was ambassador-at-large for the Ministry of Foreign Affairs of Russia (2004–2008).