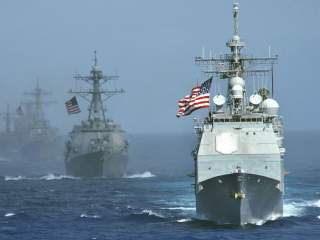 Ever since the end of the Cold War, the overwhelming power of the U.S. military has been the central fact of international politics. However, in three crucial regions—Europe, the Middle East and East Asia—America’s rivals have begun to test its resolve to use this power. Faced with serious security challenges in all three regions, the United States has to consider when and whether to push back—while its allies watch nervously, largely from the sidelines.

These events are taking place in different parts of the world, but they are intimately connected. It is American military might that guarantees borders all over the world. In the Middle East, the United States has giant naval and air bases, which exist to reassure friends and to intimidate rivals. In East Asia, the U.S. Navy has become used to treating the Pacific as an “American lake”—guaranteeing freedom of navigation and providing reassurance to its allies. In Europe, it is NATO that guarantees the territorial integrity of its member states, and the United States now accounts for a staggering three-quarters of NATO’s military spending.

These security orders are now under challenge in all three regions. In Europe, Russian intervention in Ukraine has led directly to the movement of NATO troops into the Baltic states, overt nuclear threats from the Kremlin and talk of a new cold war. The Putin government’s seizure of Crimea from Ukraine in 2014 represented the first forcible annexation of territory on the European continent since the end of the Second World War. The subsequent Russian intervention in eastern Ukraine (denied in Moscow) created strong pressure on the Obama administration to supply weapons to the government of Ukraine. The White House’s refusal to take this step has been added to the charge sheet by those who accuse Obama of pusillanimity in the face of naked aggression. However, NATO has decided to move some troops into the Baltic states on a rotational basis—a response to the widespread fear in these states that they are vulnerable to Russian military moves. This in turn has prompted NATO members to reflect hard on their Article 5 commitment to defend Estonia, Latvia and Lithuania should they ever come under attack.

In the Middle East, Russian intervention in the Syrian civil war has underlined the extent to which the United States has lost control of the region following the upheavals of the Arab Spring and America’s withdrawal of troops from Iraq. With the United States visibly reluctant to put “boots on the ground” in the Middle East again, the Russians noted a power vacuum and moved quickly to fill it. By firing cruise missiles into Syria, the Russians even staged a mocking emulation of previous U.S. military interventions in the region. Russia’s actions in Syria also created the risk of a military collision with the United States, as both countries’ air forces carried out clashing missions in the same contested airspace. The clarity of Russia’s support for Syrian president Bashar al-Assad seems to mark a stark contrast with the confusion of U.S. policy in Syria, where America sometimes seems to be opposed to both sides in a civil war, calling for an end to the Assad regime and the defeat of the Islamic State forces that are fighting him. America’s traditional allies in the Middle East have rounded on the Obama administration, charging it with weakness. Meanwhile, Israeli prime minister Benjamin Netanyahu’s government has accused the White House of concluding a disastrous nuclear deal in Iran that is tantamount to appeasement. The Saudis are also deeply unhappy with America’s rapprochement with Iran and have not forgiven the United States for (as they see it) betraying Egyptian president Hosni Mubarak.

In Asia, China’s island-building program in the South China Sea has taken shape over the last year, transforming Beijing’s theoretical claim to territorial waters hundreds of miles from its coast into something that is (literally) more concrete. America says that it takes no position on China’s territorial disputes with its neighbors—but that it is determined to protect freedom of navigation in the Pacific. Hence, the U.S. Navy’s decision to challenge the idea that China has established territorial waters around its new artificial islands, by sailing the USS Lassen within twelve miles of one of these new features. Even this action, however, has still led to charges of American weakness—by critics who argue that the Obama administration agonized too long and too openly before deciding to send the Lassen on its mission.

Nor is this likely to be the end of the matter. The U.S. Navy has made it clear that it plans regular patrols within the twelve-mile zones around the reefs claimed by Beijing. The Chinese government has vowed to react. If it decides to place military installations or troops on some of the reefs and islands that it claims, the region will once again look towards Washington for a reaction. The “American lake”—otherwise known as the Pacific—is now clearly contested water.

All three disputes are a reminder that, despite voguish talk of a “borderless world,” the control of territory is still fundamental to world politics. As Sir Robert Cooper, a former diplomat and accomplished theorist of international relations, puts it: “World orders are territorial orders. If you don’t know who owns territory, you don’t know anything about international order.” Thomas Wright of the Brookings Institution makes a similar point, when he argues that international political stability is dependent on “healthy regional orders, especially in Europe and East Asia. If these regions fall apart, nothing will save the global order.”

More broadly, these three regional challenges pose a global question—how long can the United States, a country that represents less than 5 percent of the world’s population and 22 percent of the world economy, continue to be the dominant military and political power in every significant region of the world? That question, in turn, raises further issues. First, what is the role for American allies in supporting the regional orders in Europe, the Middle East and East Asia? Second, should America make any concession to the idea of regional spheres of influence, particularly for China and Russia? Finally, should the United States be more selective about where it chooses to exert its power—or does the vision of an apparently hesitant America in one region, inevitably erode U.S. “credibility” all over the world?

The Obama administration’s relationship with its regional allies is rather more complicated than might be assumed. The narrative of American timorousness might lead some to believe that all of America’s regional allies are clamoring for a more robust U.S. response to regional challenges. This picture is closest to the truth in the Middle East, where both Israel and Saudi Arabia have barely disguised their preference for U.S. military action against Iran—and the Saudis have also regularly lamented America’s failure to take a tougher stand against the Assad regime in Syria. However, the Obama administration has remained understandably skeptical about whether wars that are in the interests of its regional allies are necessarily in the interests of the United States itself, particularly when it is American troops that will be expected to do the fighting and American politicians that will be expected to take the blame when it all goes wrong.

In Europe, America’s NATO allies have been divided among themselves about how to react to Russia’s actions in Ukraine. Generally speaking, the further east you get, the greater the demand for a tough American response, with the Balts and Poles leading the hawks. The German government, however, was clearly opposed to supplying weapons to Ukraine, and industry recoiled at the imposition of sanctions upon Moscow. Beyond the elite level, opinion surveys suggest that the Europeans are less prepared to confront potential Russian aggression than Americans. A recent Pew survey asked respondents whether they supported using military force to defend a NATO ally, neighboring Russia, that “got into a serious military conflict” with Moscow. Some 56 percent of Americans agreed that “our country” should use military force in such a case. But the proposition did not get majority support in any European NATO member, including Poland—with support for a military response as low as 38 percent in Germany. If the question before World War II was “who will die for Danzig,” the question today is “who’s prepared to go under for Tallinn?” Not that many, apparently.

America’s Asian allies are similarly ambivalent about how confrontational the United States should be in responding to China. None of them look forward to the idea of living in a Chinese-dominated region. But countries such as Singapore and South Korea are already treading carefully in their relations with China—and all dread being forced to make an overt choice between Washington and Beijing. The Japanese government led by Shinzo Abe has been more obviously favorable to a robust U.S. response to Chinese assertiveness. But the prime minister’s efforts to reinterpret the Japanese constitution to allow Japanese troops to fight alongside Americans, although ultimately successful, were also deeply controversial at home. There remains a deep strain of pacifism in Japanese public life and the U.S. base in Okinawa—crucial to America’s military presence in the Pacific—continues to excite controversy.