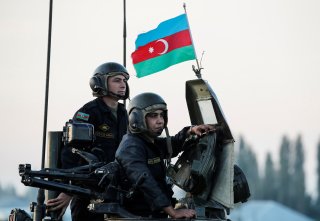 The Sept. 11, 2001, terror attacks brought a brief moment of unity to Americans but also ushered in a period of partisan foreign policy. During the Bush administration, Democrats drew partisan lines on the 2003 Iraq war, at least after they found little evidence that weapons of mass destruction existed. Republicans repaid the favor first on the Libya intervention, at least after the Benghazi debacle, and then on the 2015 Iran nuclear deal. Israel and Saudi Arabia remain firmly within progressive crosshairs.

Joe Biden has made healing partisan discord a pillar of his campaign. Should the former vice president wish to carry that promise over to foreign policy, then he would find no better place to start than leading a bipartisan effort to stop the Azerbaijani assault on Nagorno-Karabakh, or Arsakh as locals call it. Nagorno-Karabakh is a mountainous region historically populated by Armenians. Soviet premier Joseph Stalin, however, transferred the region to Azerbaijani control as he sought to undercut nationalism in the Caucasus. Decades of communism imposed from afar were not enough to undo millennia of culture and history, however. As the Soviet Union crumbled, violence erupted between Armenia and Azerbaijan while Armenians in the mountainous region fought ethnic cleansing and sought to rejoin Armenia. In the fighting that followed, Armenians largely re-asserted control over Nagorno-Karabakh, and the region has acted as a de facto independent republic ever since.

Against the backdrop of the initial fighting and credible reports of ethnic cleansing, Congress passed the Freedom Support Act, Section 907 of which determined U.S. aid “may not be provided to the Government of Azerbaijan until the President determines, and so reports to the Congress, that the Government of Azerbaijan is taking demonstrable steps to cease all blockades and other offensive uses of force against Armenia and Nagorno-Karabakh.” Azerbaijan has long argued this sanction was unfair given that the U.S. State Department recognizes and affirms the Stalin-era border changes, but initially found little support in Congress or the White House.

This changed after the Sept. 11, 2001, terrorist attacks. Azerbaijani president Heydar Aliyev, father of current leader Ilham Aliyev and mastermind of the initial attempt to encircle Nagorno-Karabakh and drive out Armenians, allied himself with the United States in the wake of the Al Qaeda strikes and declared itself an ally in President George W. Bush’s “Global War on Terror.” Aliyev allowed Azerbaijan to be used for a number of counterterrorism operations, and the country also served as an important listening post as tensions mounted between the United States and Iran. The United Kingdom, perhaps motivated by British Petroleum’s interests in Azerbaijan, encouraged the rapprochement as did Israel, which Azerbaijan cultivated both directly and through Jewish organizations in the United States.

As a reward for Azerbaijan’s positioning itself as a U.S. ally in a time of need, Congress  amended Section 907 to allow a presidential waiver of restrictions on aid to Azerbaijan if such a waiver “is necessary to support United States efforts to counter international terrorism; is necessary to support the operational readiness of United States Armed Forces or coalition partners to counter international terrorism; is important to Azerbaijan's border security; and will not undermine or hamper ongoing efforts to negotiate a peaceful settlement between Armenia and Azerbaijan or be used for offensive purposes against Armenia.”

The current Azerbaijani offensive, however, violates each condition of the Section 907 waiver, most recently extended in March 2020 by Deputy Secretary of State Stephen Biegun. Whereas first Heydar and then Ilham Aliyev once stood against Al Qaeda, Azerbaijan now works in conjunction with Turkish-backed Syrian mercenaries, many of whom previously served Al Qaeda-linked groups or the Islamic State. In essence, Azerbaijan is following the lead of both Turkey and Pakistan, both of which often depict themselves as counterterrorism partners while covertly supporting anti-Western terrorists. As the aggressor, Azeri forces further make a mockery of their own border security concerns and also act to undermine any pretense to a peaceful settlement.

Azerbaijan publicly denies its aggression, but it hemorrhaged its credibility when its defense ministry posted a statement on Twitter that accused Armenia of ceasefire violations on Oct. 26, a move reminiscent of the 2013 incident when Baku accidentally released election results before the polls opened. Baku has also denied the presence of Syrian mercenaries transported into the theater by Turkey even as Azerbaijan-friendly journalists have interviewed the Syrians.

Since 2018, the year popular revolution restored democracy in Armenia, the U.S. government has provided over $100 million in security assistance to Azerbaijan, even as that country continues its descent into authoritarianism. Rather than bring peace, this money now funds ethnic cleansing. On Oct. 28, Biden issued a statement calling on “the [Trump] administration [to] fully implement and not waive requirements under section 907 of the Freedom Support Act to stop the flow of military equipment to Azerbaijan, and call on Turkey and Russia to stop fueling the conflict with the supply of weapons and, in the case of Turkey, mercenaries.”

During presidential campaigns, it is easy to play the role of backseat driver and question every decision the incumbent makes but let us hope that Biden and his aides are not merely posturing for political advantage. The current waiver of Section 907 violates the law upon which it is based and should be revoked immediately. That the State Department has turned a blind eye to Azeri violations and maintains the waiver is an affront to all Congressmen, whether Democrat or Republican.

Azerbaijan has shown the insincerity of both its counterterror commitments and its pledge to pursue a peaceful resolution of its dispute with Armenia. If Biden is victorious, then he can prove his rhetoric about working across the aisle to be sincere by establishing a broad, bipartisan coalition to end Azerbaijan’s free pass and descent into terror complicity. As he rebuilds confidence across the aisle, he might then leverage that domestic coalition to restore consensus on other issues, from the Eastern Mediterranean to the Middle East to Asia. There is no stronger foreign policy than one rooted in bipartisan consensus and cooperation.

Are Armenia and Azerbaijan Sliding Towards Full-Blown War?