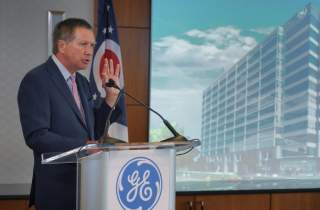 You don’t hear John Kasich’s name floated much in the 2016 presidential sweepstakes. Expect that to change after November, especially if Scott Walker runs into trouble in Wisconsin.

Kasich is the governor of Ohio, which is virtually a must-win state for Republicans. The polling suggests he is going to be reelected by a 16-to-22-point margin. He won his first term by beating a Democratic incumbent.

The 2016 Republican National Convention will take place in Cleveland, a relatively easy drive from Kasich’s office in Columbus.  Being nominated in Boston in 2004 didn’t guarantee Massachusetts’ John Kerry would win the election. But it didn’t hurt in terms of optics.

Unlike many of the Republican senators eyeing the White House, Kasich has real executive experience. And unlike most of the governors, he has a serious Capitol Hill resume. Kasich served nine terms in the House and rose to chairman of the Budget Committee.

Yes, Bobby Jindal and Mike Pence are Republican governors who served in the House. But Jindal was there for only two terms. Pence was briefly chairman of the House Republican Conference, but has no policy accomplishments like hammering out a balanced-budget deal with a Democratic president.

Come to think of it, that’s an advantage Kasich has over Paul Ryan, too.

Unlike Wisconsin’s Walker, Kasich lost his fight to curb collective bargaining by public-sector unions (he didn’t exempt police unions, and the voters repealed his reforms). But he has lived to be less of a union target than Walker.

Chris Christie’s reelection race was arguably more impressive, and he took on the public-sector unions, too (especially the teachers). But does anyone think Christie has a better shot of beating Hillary Clinton in New Jersey than Kasich does of carrying Ohio? The Bridgegate scandal has also brought Christie back down from the political stratosphere.

In theory, Kasich is well positioned to paper over many of the divisions in the Republican Party. During the 1990s, he advertised himself as a “cheap hawk”—someone willing to cut defense spending where possible, but serious about national security.

Kasich is an evangelical with ties to the Christian right. He was admired by many libertarian-leaning Republicans during his time in Congress. And he has since made his peace with moderate Republicans (more on that later).

The Buckeye State governor is the son of a mailman and his old congressional district was the kind of place where your mailman or storekeeper might be a Republican. He has a populist pitch—“Courage can be contagious” is an old catchphrase—which he honed with a television show on Fox News after leaving Washington.

When Kasich decided to reenter politics to run for governor, I thought his post-congressional stint at Lehman Brothers might be a major political liability. So far, it hasn’t been. But as both Ted Kennedy and Barack Obama demonstrated with Mitt Romney’s Bain history, sometimes national Democrats are more creative than their state-level brethren.

Finally, there is little doubt Kasich would like to be president. He geared up to run in the 2000 primaries, but found his political real estate largely taken up by George W. Bush. “George Bush's term of 'compassionate conservative' really kind of defines what John Kasich is all about,” Kasich said when he dropped out in 1999. “I feel as though I have a soul brother.”

That might be the problem for Kasich. After Dubya busted the budget, grassroots Republicans have little appetite for his compassionate conservative—read big-spending—soul brothers. Kasich has traveled a long way from the budget-cutting that made him a celebrity among ‘90s House Republicans.

Not only has Kasich broken with conservatives on the Obamacare Medicaid expansion and other issues, but he has done so while making limited government sound almost un-Christian. “I had a conversation with one of the members of the legislature the other day,” Kasich recalled. “I said, ‘I respect the fact that you believe in small government. I do, too. I also know that you’re a person of faith.’”

Kasich, who was zinged for attempting to restrain Medicare spending in 1995, asked of the people who might benefit from expanded Medicaid, “What are we gonna do, leave ‘em out in the street? Walk away from them, when we have a chance to help them?”

Most recently, conservatives are up in arms about a Tea Party leader in a “Stop Common Core” t-shirt being turned away from a Kasich event.

Some of this rhetoric might actually be helpful in a general election, since Republicans are hurt by a reputation for heartlessness (although if St. Peter has seen the data on health-care outcomes for Medicaid patients, he might conclude voting for its expansion doesn’t satisfy one’s duty to the poor).

But Kasich would have to get out of a Republican primary first, without acquiring the kind of establishment baggage that could weigh down Jeb Bush.