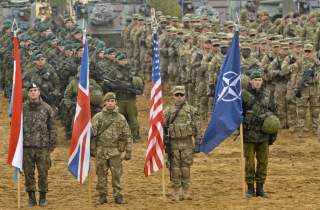 Donald Trump will not be handled, interpreted or managed.

That is the first conclusion I drew after his appearance at the headquarters of the North Atlantic Treaty Organization on Thursday. In the run-up to his first direct, face-to-face encounters with the other leaders who make up the Euro-Atlantic alliance, the U.S. national-security establishment was attempting to run a classic reassurance campaign. Europeans were being told that, despite his campaign rhetoric and ongoing skepticism, this president—like all of his predecessors—would remain absolutely committed to the North Atlantic framework. This was supposed to be his “growing up” moment where Trump, like other recent “outsider” presidents (Bill Clinton, George W. Bush or Barack Obama) would accept initiation into the mysteries of the transatlantic relationship, notably the proviso that American leadership is purchased by the United States’ willingness to continue shouldering the majority of the defense burden.

Trump appears to have dispensed with that script. He did not cast the symbolic pinch of incense standing before the shrine of the alliance by reciting the fundamental creed of Article Five: the pledge that an attack against one is to be considered an attack against all. In some ways, of course, whether Trump believes it or not is irrelevant, since Article Five is enshrined in a treaty ratified by the Senate in 1949, and re-ratified every time a new member joins the alliance, with Montenegro being the most recent.

Trump chose not to veto the accession of the newest member of NATO, and so, his silence in essence equals consent that he is prepared to accept the requirements of the alliance. The North Atlantic Treaty, according to Article Six of the U.S. Constitution, now holds equal weight as the “law of the land,” so whether Trump repeats the words or not does not matter in terms of American legal commitments.

The problem, of course, is that the language of Article Five is quite squishy. It does not automatically commit any nation to have to go to war, only stating that they are prepared to undertake consultations in the event of an armed incursion against one of the member states. What a number of alliance members—notably in the Baltic Sea basin—were hoping to hear was to have the president, in his own words, show that he accepts the interpretation of Article Five as an automatic defense guarantee that will trigger a U.S. military response.

Indeed, the entire Eastern Reassurance Initiative is based on the strategic assumption that a small number of U.S. and allied military personnel deployed in the east will act as a tripwire that, if crossed, will lead to a massive response. Trump’s silence today—combined with the frank comments from EU Council president Donald Tusk earlier that morning that he and the president did not see eye to eye on their assessments of Russia—will not be well received in the northern and eastern portions of the alliance.

In addition, Trump demonstrated that he is not prepared to completely jettison his campaign rhetoric about “freeloaders.” He chose to directly address the question of whether alliance members are paying their fair share—not in coded, polite language, but in blunt statements that made other NATO leaders visibly uncomfortable. From there, it is not difficult to see an equation developing: U.S. commitment to Article Five is directly proportional to increases in defense spending by the other member states. In his emphasis on the importance of combating the Islamic State, Trump has also suggested that NATO’s value to him is directly connected to its utility in confronting what he sees as his principal national security challenges.

The silver lining is that Trump’s emphasis on the threat to the Euro-Atlantic world emanating from the Middle East aligns more with the southern and western wings of the alliance in Europe, particularly for France, Italy and Spain. They may be more inclined to see common ground with a new administration that de-emphasizes the Russia threat in favor of the metastasizing problems in the Mediterranean basin. Yet Trump’s initial encounter with newly elected French president Emmanuel Macron suggests that there will not be an easy convergence on such issues between the Élysée Palace and the White House.

The hope when Trump left Washington was that he would put European fears about the strength, depth and reliability of the U.S. commitment to their security to rest. He will leave Brussels having done just the opposite.