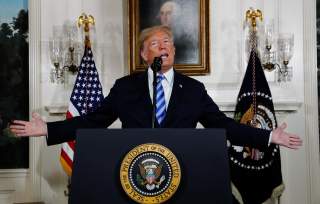 American presidents have long found double-trouble in managing Iran and North Korea. The two countries are separated by four thousand miles and starkly different histories, but they share similarly antagonistic relationships with the United States, made only more tense by nuclear threats. For U.S. decisionmakers, North Korea and Iran pose the same broad foreign-policy challenge: how to manage down the risks with acceptable concessions.

In the span of a month, President Donald Trump faces crucial opportunities to respond to this challenge with both countries, first in his Iran nuclear-deal decision earlier this month and then in his meeting with North Korea’s Kim Jong-un on June 12. So far, Trump’s penchant for throwing away convention shows promise for one of these cases (North Korea) but portends disaster for the other (Iran).

Trump explicitly connected his recent decision to pull out of the Iran deal to his upcoming meeting with Kim. Exiting the “disastrous” Iran deal, Trump declared at the White House, “sends a critical message”—that “the United States no longer makes empty threats.” Trump was quick to add that the decision also spoke to his own character: “When I make promises, I keep them,” he said. “In fact, at this very moment, Secretary Pompeo is on his way to North Korea in preparation for my upcoming meeting with Kim Jong-un. . . . Hopefully, a deal will happen, and with the help of China, South Korea, and Japan, a future of great prosperity and security can be achieved for everyone.”

While Trump referenced Asian allies and partners—China, Japan and South Korea—that have worked with him to open up diplomacy with North Korea, he isolated European allies on his Iran decision. Following this announcement, the leaders of France, Germany, and the UK issued a joint statement that directly contradicted Trump, insisting that the Iran nuclear accord “remains the binding international legal framework for the resolution of the dispute about the Iranian nuclear programme.”

Trump prides himself on his deal-making abilities. His book, Trump: The Art of the Deal—which was published in 1987, thirty years before he became president—offers a general template of hard-edged negotiation and risk-taking. (Kim Jong-un may have read the book, since basketball player Dennis Rodman gifted it to him on a visit to North Korea in June 2017.) Above all, Trump’s stated deal-making strategy relies on deal-breaking: He proposes tearing down existing frameworks, finding sources of leverage, and then seeking to strike a better agreement than previously existed.

But that approach is not one-size-fits-all. Since entering the Oval Office, Trump has continued to apply this basic philosophy with varied success. Last year, he announced that the United States would pull out of two international agreements he had previously disparaged: the Paris Climate Accords (a “con job”) and the Trans-Pacific Partnership (a “horrible deal”), though he has since indicated he might change his mind on the latter. The Iran nuclear accord, he said on Tuesday, “was a horrible, one-sided deal that should have never, ever been made.” Trump’s decisions to break these Obama-era agreements may damage American interests.

On North Korea, however, this Machiavellian transactionalism has worked to script—at least thus far and notwithstanding Pyongyang’s latest threat to cancel the Singapore summit. After his inauguration, in January 2017, President Trump instructed his national-security team to develop a new North Korea policy. The result was dubbed “maximum pressure and engagement,” and most of 2017 was spent on building pressure followed by diplomacy when the moment was ripe.

To apply increasing economic pressure, Trump worked to convince U.S. allies and partners, especially China—which is responsible for as much as 90 percent of North Korea’s foreign trade—to up their sanctions on North Korea. And to apply military pressure, the president made public more “usable” defense options, which incentivized both Beijing to enforce sanctions and Pyongyang to negotiate.

Did the pressure work on North Korea? On one hand, nuclear and long-range missile achievements in the second half of 2017 no doubt boosted Kim’s confidence. On the other, however, Kim’s insistence that North Korea’s willingness to negotiate is in no way in response to this pressure strategy smacks a bit of protesting too much. If South Korea, China and the United States could not be sure whether Trump might resort to military action, then it is likely North Korea also could not have been certain: it’s safe to assume that pressure played a role.

But crucially, Trump’s risk-taking extended beyond pressure to the other half of the North Korea strategy: diplomatic engagement. In addition to working closely with the progressive government of President Moon Jae-in in Seoul, Trump has managed, through some missteps, to stay on the same strategy with America’s key Northeast Asian allies in South Korea and Japan. And in March, despite wide criticism from his opponents, the President immediately accepted Kim’s summit meeting invitation—something no other American president has ever done.

In the case of North Korea, perhaps Trump’s boldness will pay off: taking a chance on peace is a good thing. If his strategy is successful, however, it will be because this boldness was combined with the desire to catalyze a diplomatic opening. This allows his national-security team to test the true intentions of Kim on total, verifiable denuclearization, a goal that remains an uphill battle.

Trump must remember that scrapping existing foreign policy can only be sparingly done. On North Korea, Trump worked with allies and major powers to engage in new diplomacy after seventy years of failure. But on Iran, Trump has done the opposite: He has undermined commitments with allies and major powers and walked away from diplomacy, with no path for applying sufficient leverage to strike a better bargain.

North Korean diplomacy, even if it proves to be theater with no substance, sets the United States up in a stronger position and may yield a breakthrough. If it fails, we can revert to pressure, deterrence and containment. Iran anti-diplomacy jeopardizes the finite power of the United States, both to manage the Iran threat and to mobilize a powerful international coalition. No amount of one person’s artful deal-making can salvage what is lost there.

Patrick M. Cronin is senior director of the Asia-Pacific Security Program at the Center for a New American Security; Sarah Donilon is the editor of the Yale Journal, The Politic, and currently interning at CNAS.

Image: U.S. President Donald Trump announces his intention to withdraw from the JCPOA Iran nuclear agreement during a statement in the Diplomatic Room at the White House in Washington, U.S., May 8, 2018. REUTERS/Jonathan Ernst​