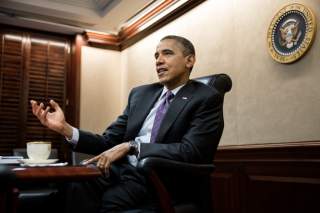 According to Logevall, Obama exercises a flexible “principled pragmatism” that gives American diplomacy and soft power a chance to reduce international tensions without resorting to questionable military solutions.

That approach might not please the critics who say Obama lacks a post-9/11 grand strategy comparable to containment during the Cold War. But the president’s ability to frame foreign policy concerns on a case-by-case basis “has much to recommend it,” Logevall said.

He is the author of Embers of War: The Fall of an Empire and the Making of America’s Vietnam, which won the Pulitzer for history in 2013. The book meticulously examines the rise and fall of French military and political fortunes in Indochina during the 1950s and the origins of America’s deepening involvement in what becomes Vietnam after the devastating Battle of Dien Bien Phu.

Logevall, who is the Laurence D. Belfer Professor of International Affairs at Harvard University’s John F. Kennedy School of Government, was the keynote speaker on May 13 during the Rethinking Grand Strategy Conference held at Oregon State University. The conference brought together an international panel of scholars to examine how the United States developed its grand strategy, how it operates and what grand strategy might become in the future, said Christopher McKnight Nichols, assistant professor of history at Oregon State University and director of the OSU Citizenship and Crisis Initiative.

In an interview with the National Interest, Logevall discussed why Obama really does have a grand strategy, why the United States faces fewer national security threats than many believe, how U.S. involvement in Iraq and Afghanistan mimics events during both the American and French phases of the Indochina Wars, and why American values are the nation’s best guardians of U.S. national security instead of global dominance.

What is grand strategy?

Does the United States currently have a grand strategy?

I think that it does. As I suggested in my talk, I think Barack Obama is skeptical of the utility of grand strategy. Nevertheless, he has continued to adhere to what seems to be the underlying grand strategy that the United States has followed internationally since the end of the Cold War. He is not that much different from his predecessors from endorsing what he has called a kind of “deep engagement” strategy. I think it is based on a foundational belief that the United States needs to project its power globally. It needs to continue to adhere to the principle that really drove things through the Cold War. But again, I think it’s one that he does not attach much importance to, as other incumbents might.

It has tremendous power for me. Not all historians agree. But this idea that because of geography and the advantages of that, and secondly, [because of] the protections provided by the Royal Navy during the nineteenth century—maybe not formally but perhaps indirectly—the United States existed in a condition of “free security” for a very important time in its history.

Where I differ with Woodward is I don’t think it actually came to an end with Pearl Harbor or during the 1930s, when military technologies had the habit of shrinking the world. On the contrary, for much its post–Pearl Harbor history, including down to this day, the United States has been objectively free of an existential threat. Its physical security has been largely a reality, and that has very real implications for foreign policy.

Let me challenge that idea. In my lifetime, I lived through the height of the Cold War. I’ve seen 9/11. I’ve seen America’s enemies. They seem a dangerous lot—they have everything from the ability to turn an airplane into a guided missile to ICBMs. It seems to be a dangerous world with dedicated enemies. What’s your response?

I think you make a fair point. In saying that the “free security” concept has power in my judgment—still applies in my judgment—I’m by no means suggesting it’s a world free of or devoid of external enemies. 9/11 proved, as you mentioned, in the most dramatic fashion that there are people out there that wish to do the United States harm. I think that is still true today. I think it was true during the 1950s, ’60s, ’70s and ’80s through the Cold War, and of course during certain moments such as the Cuban Missile Crisis that stands supreme in this regard. We came very close to something unfathomably terrible and that doesn’t seem to be consistent with “free security.”

Nevertheless, the United States has not been threatened in a kind of existential way that the United States was during that period, even, I would say, in the aftermath of 9/11. I would suggest that the War on Terrorism represented an overreaction—an understandable overreaction, though it may have been by the Bush administration. So, I think I am with you but we may differ over the size and the seriousness of the threat over these last six or seven decades.

What are the lessons of history in terms of the connections between what happened during the First and Second Indochina Wars and what is going on in Iraq and Afghanistan today?

I do believe that history teaches us much. We can avoid the words “the lessons of history”—some people get uncomfortable with that. Some people argue history doesn’t teach lessons. I believe it does. I think for me the First Indochina War tells us several things that are important about more recent American interventions, including Iraq, including Afghanistan. One is they demonstrate the limits of military power to accomplish political objectives. The French were, I think by any measure, militarily superior to the Viet Minh. Whenever they had engagements, the French generally prevailed. Certainly, the Americans were incomparably more powerful in terms of firepower than were the Viet Cong or the NVA (North Vietnamese Army). And yet in both instances the French failed to achieve their objectives, and so did the Americans, which suggests to me it’s about politics. You have to win politically if you are going to win at all. That’s a lesson I draw from the Indochina experience—both from the French and the Americans—that you can argue has been insufficiently considered and applied to later American interventions.

Which leads to a second lesson: Local actors are ultimately the key. What we see with the French, what we see with the Americans later, and what we see both with respect to Iraq and Afghanistan, is if you do not have a local partner who is fulfilling his end of the bargain, you are not going to succeed. And this is something that Americans I think came to realize in Vietnam: that both under Diem and under Thieu later, they just weren’t going to get what they wanted. I think there is a pretty straight line between Thieu in the late sixties and early seventies, and Hamid Karzai more recently in Afghanistan. If you have a local partner who lacks broad popular support, whose government is plagued by corruption even if he himself is not personally corrupt but nevertheless you have a corruption problem, and whose military does not have the capacity to fulfill its part of the bargain, it’s not going to happen.

The third thing Vietnam tells me is counterinsurgency, COIN as it is called, is a fraught proposition. I’m not saying it can never work. I am saying it is costly, that it always takes longer than you think, and that it is likely to be more violent than you think, even if at the heart of counterinsurgency there is this idea that you have to win hearts and minds. I think what experience shows us is it seldom works out the way we think it should.

What is the Obama administration doing right in terms of foreign policy, and what are they doing wrong?

In my judgment, I think they are doing more right than wrong. I think that the president’s foreign policy these days gets a lot of criticism, so I don’t know if mine is a particularly popular view. I think that he has on some level grasped the difficulties I mentioned a moment ago: the difficulties of counterinsurgency and nation building, the limits of American power. I think he has acted on the basis of those convictions. I think he has a fundamental faith in diplomacy, which I think is right. He understands that diplomacy and negotiations can be a very powerful tool in the tool kit of American strategists, and I think that he is exactly right. So I am appreciative of the fact and supportive of the fact that he has pursued negotiations with Iran most notably, also with Cuba. I support both of those actions. As I suggested in my lecture last night, he has this pragmatic, overall approach that proceeds on a case by case basis, a kind of “ad hoc-ery” that seems to me warranted and right for the times.