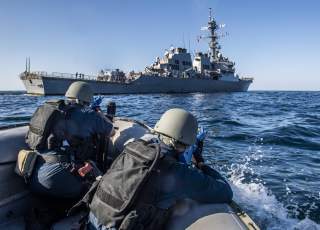 Last month, the U.S. invasion of Afghanistan marked its eighteenth year and November 24 marked three years since the first American casualty in Syria’s civil war. As these conflicts drag on, America’s endless wars deserve closer examination. But it’s not enough to say the wars should end; we need to reconsider the ideas that drive them. The concept of overextension in particular needs elaboration.

Defenders of the bipartisan status quo are pushing back on flagging public support for their policies. Their favored tactic is to label those who wish to end these failed policies as “isolationists” regardless of whether they support trade and diplomacy. One could more effectively make the case that the supporters of endless wars themselves are the isolationists for how their policies isolate the United States in the international community and isolate Washington from the will of the people.

These wars are so unpopular in Europe and here at home that they sap support for international endeavors more broadly. These foreign misadventures are diminishing global trust in the strategic leadership of the United States. The refugee crisis exacerbated by the U.S.-supported state failures in Libya, Iraq, and Syria is one of the most divisive elements in European domestic politics today and a source of opposition to American diplomatic efforts.

What these misguided attempts to reorder the Middle East demonstrate is that being everywhere at all times is less of a forward defense than an over-extension. The American position in Syria is the most recent example of how dramatically such policies can backfire. U.S. bases set up without the permission of the government of Syria were easily swept into irrelevance by Turkish intervention in the region. America might be the dominant world power, but in these wars, all politics is local. Turkey, like Iran, is a permanent fixture of the region; isolated inland American bases are not. When push comes to shove, American presence will give way to the superior resources and more direct interests of nearby powers.

The precarity of the American presence in Afghanistan is an even more compelling case. Far inland from any port or vital U.S. security interest, U.S. presence is dependent on the goodwill of an extremely unreliable arrangement with Pakistan for its logistic sustainability. This greatly constrains policy options and leaves U.S. forces in a vulnerable position compared to regional powers including China and Russia.

An alternative, more concurrent with U.S. geography, is to rely more on naval power. If used correctly, naval power offers freedom of action to choose one’s engagements and friends. The United States is uniquely situated to use the seas as highways and defensive moats. Compared to land power, naval power is remarkably efficient in terms of expense and troops needed to enact its objectives. Navies need not be as large as armies, which makes them more affordable for taxpayers, especially today as manpower costs soar. Navies are more rapidly deployable over large stretches of space than large conventional land forces. Furthermore, a majority of trade today continues to be conducted over the oceans and not overland.

For a country as strong as the United States, the entire western hemisphere is a potentially defensible supercontinent. Our vital interests are far more connected to maintaining the economic and logistical development of this resource-rich land than to policing foreign countries far afield. If the United States remains an industrial, agricultural, and financial power, then the inherent geographic advantages of wealthy and naturally defensible North America guarantee a secure position in the western hemisphere. And this strong position of regional hegemony secures a sustainable anchor for American diplomacy.

The biggest danger to any great power is other great powers, be they naval or land. But as we have seen in recent history, America’s forward deployments in Eurasia are far more of a weakness than strength in this regard. The flexibility of maritime advantages that peer competitors do not have is our competitive advantage in great-power politics. Stretching ourselves thin with excessive land deployments is strategically reckless.

Naval powers must prioritize diplomacy and not military bases as the first line of defense in foreign affairs. The necessity of integrating port cities through legal structures and standardized shipping practices encourage cordial ties with trading partners and productive negotiations to resolve local rivalries. Functioning as a remote, naval power would allow the United States to keep a greater sense of distance from regional conflicts, which would make Washington more welcome as a dispute arbiter and trusted bilateral. A distant powerful country is almost always viewed as less of a threat than one with troops nearby.

A naval-centric approach that plays to America’s geographic strengths will better protect American power and defense interests across the world in the long-term. Such a strategic redirection would end the present bipartisan addiction to endless war and could free up political will and taxpayer resources for the true keys to American power: domestic prosperity, first-rate infrastructure, and technological innovation. It would devote limited defense resources to strategic priorities and ensure Washington always has time to meet challenges with sobriety and restraint.