The Problem With Emily In Paris 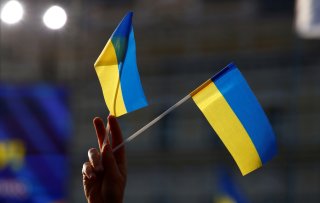 The atmosphere here in Kyiv is suffused with anxiety as well as stoic deflection as the country waits for possible news of the latest escalation from Russian military forces massed around the country. Concurrently, an unlikely if perhaps more insidious threat to the Ukrainian national identity is sending Kyiv into a corybantic frenzy. The second season of the popular and inane Netflix show “Emily in Paris” has commenced, and it is proving to be even more controversial than it was during its premiere last year, when about half of my fellow Anglophone expat literati in Paris spent weeks decrying its caricature of their own youthful Parisian foibles.

If the show is an instance of pseudo-artsy and aggravating adaptation of Sex in the City for millennials that utterly fails to take evolutionary flight from cliche to archetype, the production has nonetheless tapped into a deeper wellspring of fantasia and status anxiety. Depending on one’s taste, the show is either a deeply derivative and cliche-ridden monstrosity or a bubbly escapist delight for those who will never know the singular Parisian delights of lunch at Cafe de Flore with Pascal Bruckner. Or spending half a day waiting in line to renew ones Carte de Sejour at the Préfecture de Police.

One of the new episodes has the eponymous heroine finally deigning to take French lessons, which permit her to become acquainted with the Ukrainian student Petra. The character—played by the Paris-based Ukrainian actress Daria Panchenko—is an arrogant kleptomaniac whose French is lousy. The young Ukrainian is entitled and afraid of being deported even as she brazenly shoplifts while attempting to entangle Emily in the rather déclassé caper. Ukrainian society and social media promptly erupted in scandal over the manner in which the series portrayed her.

The Ukrainian character (as well as the Ukrainian actress who was roundly criticized in real life by her countrymen for having taken the role) was accused of playing up the exact sort of stereotypes that Ukrainians have spent the previous years fighting against. The portrayal of the national character as vulgar and transactional in the international media hit a nerve as Ukrainians are keen to be seen having made progress in rooting out national corruption. Anyway, what sort of name is Petra for a Ukrainian lass?

Soon enough, Ukrainian minister of culture Oleksandr Tkachenko—who himself comes out of a television producer background—declared that it was “offensive” that “in ‘Emily in Paris’ there could be (such) a caricature of a Ukrainian woman, which is unacceptable” he posted on his official Telegram channel. The besmirching of Ukrainian national honor by Netflix could not go unquestioned. An official letter was quickly dispatched to the streaming giant. The story had all the ingredients of an incipient international scandal and was quickly picked up by the media.

I have been observing the post-Maiden Ukrainian cultural revolution for the last eight years. The creation of a national Ukrainian culture to match the spirit of civic activism that saved the state from collapse under the onslaught of the Russian invasion in the summer of 2014 is one of the grandest, and perhaps least understood, stories of contemporary Europe political life. The creation of that flourishing new culture is the core storyline in From Odessa With Love, my new book of essays about Ukrainian culture and politics.

The breakdown of relations with Russia and Ukrainians’ often messy separation process from the greater Russian cultural sphere (flights were canceled, social media platforms were banned, relationships were sundered) has spurred remarkable new innovations in fashion, music, literature, the visual arts, and—perhaps most importantly—television and cinema. Ukraine has also avoided the danger of becoming a barren Sparta. Indeed, the country is passing through a historical-cultural revolution borne out through artistic fervor. It may very well be the most interesting country in Europe at this moment.

All of which made the outpouring of both popular and officious Ukrainian resentment—betraying a streak of anxiety over the way the country is viewed internationally—understandable. The intervention of the Ukrainian minister of culture showed that Emily had unwittingly insulted a culture in the midst of developing a sense of itself. The subtext, of course, was centuries of chauvinist Russian imperial repression of the Ukrainian language and cultural development along with the crude stereotypes of Ukrainians being the hick cousins to Romanov grandeur. It is also a comprehensible impulse for a fledgling country which has struggled to clamp down on rampant corruption which had contorted its economic and political life for the duration of its thirty years of independent existence. Civil society activists have spent years fighting the rot—so, the thinking goes, who needs Petra in Paris making us all look bad to the Americans?

As the Western world has become more woke, the number of nationalities that a writing room in Hollywood can make fun of without being defenestrated by social media mob has declined. Ukrainians—who are at once both European and perhaps also seem marginal or exotic enough to be made fun of—may have seemed like a plausible and harmless candidate for mirth for the writers of “Emily in Paris.’’ Eastern Europeans may very well be the last people in the world that one can be openly bigoted about.

Which is ultimately why the caricatures in Emily in Paris made so many people so livid. Ukrainian women have served at the forefront of the creation of the cultural capital of the new Ukrainian nation. Ironically, at the same exact moment that the minister of culture was gallantly defending the honor of professional Ukrainian women abroad, the Ukrainian-born conductor Oksana Lyniv was being offered the baton of the Bologna Teatro Comunale opera house. She was the first woman to ever have served as the musical director of a serious Italian opera house.

Here’s the deal, as President Joe Biden likes to say: the “Emily in Paris” series was always an embarrassing red flag—a poor man’s Woody Allen cliche about a universal dream. The great joke about “Emily in Paris”—the faux artsy and naive American corporate striver in the land of old-world sophistication—was that hers was always the wrong sort of “artsiness” that passes for nonconformism in corporate public relations. Emily’s over-the-top dress sense was always the semiotic signal that underlined the wider point about the cliches. Which were the point. The Ukrainian ladies that I know in Paris are among the chicest I have met anywhere. Unlike Emily, they also do not enjoy the luxury of being uninterested in speaking fluent French in France.

Vladislav Davidzon is a writer, journalist, and artist who has reported extensively from Ukraine.