This Program Can Make America's Future Engineers Number One 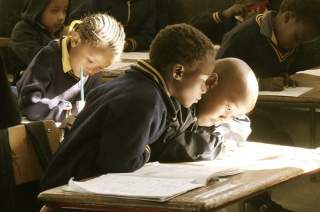 Our society practically worships two groups of individuals: athletes and entertainers. It has been this way a long time, but the trend has reached its pinnacle in the modern era. We swoon over pop stars and movie stars; we pay the best pro athletes in the hundreds of millions of dollars. Perhaps most significantly, in terms of what it says about our culture and how it shapes future generations, we send messages to our kids from early in their lives that sports are what count most at school, at least in terms of after-class activities. We often emphasize sports facilities, large coaching staffs and homecoming games over other types of extracurricular activities.

Not all of this is bad. We admit to liking sports ourselves. Strong, healthy bodies complement bright minds; exercise gets the blood flowing in ways that ultimately can help the brain, too. Done right, sports can develop teamwork skills and a strong sense of camaraderie.

But as a society, we need to rethink our approach. Kids will spend many hours a week learning to bounce or punt or throw or strike a ball correctly, partly for the fun of it but partly in the hope of becoming the next LeBron James or Cam Newton. And in many of the country’s neighborhoods and schools, it is often such figures who are the only prominent role models. Alas, for the vast majority of these aspiring young superstars, hours spent in the gym or on the playground are largely irrelevant to their career prospects and their life prospects.

Our intent is not to denigrate athletics. Indeed, advocates of science education can take a page out of the sports handbook, with the concepts of organized, after-school, team-oriented activities. The call to action is clear. U.S. students are falling behind internationally, ranking twenty-ninth in math and twenty-second in science among industrialized nations in standardized testing. Would the United States tolerate an Olympic team that ranked internationally twenty-second to twenty-ninth? Of course not. Yet it probably will not be Olympic athletics who will cure cancer or build the next generation of supercomputers or command the Mars mission. Our athletes and our performers are hugely important to this country, but they won’t determine the future of the United States. The future will be determined by students of STEM—young men and women from every part of America.

The term STEM is popular these days, and for good reason. It stands for science, technology, engineering and math. These are, as noted, areas of academic pursuit where American students rank among the lowest for the world’s major advanced economies. To be sure, America has the best universities, most innovative high-tech sectors, and best aerospace and medical innovation capabilities of any nation on Earth, to cite just a few of its strengths. But in the twenty-first century, excellence among our nation’s best 10 percent is no longer good enough. And in an era when Bernie Sanders and Donald Trump are reflecting many middle-class economic anxieties, greater proficiency in technology offers hope. There are literally millions of jobs in the United States waiting for properly qualified individuals.

Schools in the United States today do try to teach the S and the M of STEM—science and math—fairly diligently. But math is abstract for most. And science often seems disconnected from reality. What does dissecting a frog, however cool, have to do with one’s future?

We need to do better with the T and the E. Technology and engineering. Today’s American children will likely watch astronauts go to Mars, cars learn how to drive themselves, new sources of energy displace hydrocarbons and humans routinely live beyond one hundred years. They have a choice to be bystanders as technology and engineering make such giant strides, or to be participants.

That’s where FIRST (For Inspiration and Recognition of Science and Technology) comes in. It is a hands-on, mentor-based STEM program that one of us founded a quarter century ago. Presently operating in several thousand schools nationwide, just under 10 percent of the nation’s total, it tries to emulate the concept of a sports team but with a focus on realms like robotics that most children otherwise would consider abstract and remote. By making technology and engineering accessible to these students, and by helping them try to experiment and invent from an early age, we can literally change the culture of American society—and its economic prospects as well.

Today, FIRST is funded primarily by corporate and private sources. That’s allowed it to expand enormously. But it means that a school district in a remote or disadvantaged part of the country has to hope that a guardian angel will emerge to take interest in it.

Fortunately the Every Student Succeeds Act (ESSA), which was passed with strong bipartisan support and signed into law last December, contains provisions that could enable school systems in disadvantaged areas of our country to create FIRST teams. However, we need to ensure that this legislation is fully implemented and funded. It is essential at this critical time for government to help scale this concept to every school. Agencies like the Department of Defense and NASA have already funded several hundred FIRST teams, and continue to grow their involvement because of the well-documented success of this program. But it’s time for the next step. Simply by funding an after-school stipend for a science coach, akin to what schools give sports coaches already, the government could take the idea of FIRST to scale, helping it reach all schools in the country.

The cost is far from prohibitive. A stipend plus modest material costs of $5,000 per school translates into a total nationwide cost in the low hundreds of millions of dollars per year. By Washington standards, this is a tiny expense for a lifetime of more technically fluent and curious future American professionals. And for a presidential race in which candidates should rightly be expected to have serious economic visions for the country, this idea could be a crucial contributor to a broader road map for the future.

Dean Kamen is an inventor, entrepreneur and the founder of FIRST (www.firstinspires.org). John Allen is a retired U.S. Marine Corps four-star general and a senior fellow at the Brookings Institution in Washington, DC.