Pulling the U.S.-Russia Relationship Back from the Nuclear Brink 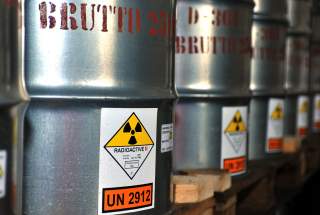 This week U.S. Secretary of State Rex Tillerson meets in Moscow with his Russian counterpart Foreign Minister Sergey Lavrov in the first high-level sit down between the Trump administration and Russia since President Donald Trump’s inauguration.

Though the discussion is likely to be dominated by the Syrian government’s use of chemical weapons last week and its aftermath, the two diplomats should seek to lay the groundwork for Presidents Trump and Vladimir Putin to pursue a series of pragmatic near-term steps to reduce the growing danger posed by nuclear weapons.

Tillerson’s visit to Moscow comes amid a period of significant tension in the bilateral relationship due to the crisis in Ukraine, the buildup and exercising of NATO and Russian military forces in the common border area between the alliance’s easternmost members and Russia, and Russian meddling in the U.S. election. Syria’s use of a banned nerve agent last week, in violation of the Chemical Weapons Convention, and the U.S. decision to attack a Syrian air base with cruise missiles in response, has further muddied the troubled waters.

Despite being Syria’s primary ally and benefactor, Russia has shamefully failed to ensure that Syria is meeting its obligations under the terms of a 2013 agreement brokered by Washington and Moscow not to use chemical weapons and to verifiably eliminate banned chemicals, precursors and associated production facilities.

In Moscow, Tillerson must pressure the Russian leadership to compel its client in Damascus to meet its commitments. This will require Russian support in the UN Security Council for allowing international inspectors to determine the nature and source of last week’s attack, as well as cooperation with the West to remove whatever chemical weapons remain in Syria.

At the same time, the Trump administration must determine what its larger objectives are in Syria and ensure that its policy does not lead to a military confrontation with Russia, which has deployed significant military forces in the country.

Avoiding direct conflict between Washington and Moscow in Syria highlights another important issue that should be on Tillerson and Lavrov’s agenda this week: any confrontation between the two countries, whether in Syria or elsewhere, carries with it the risk of escalation to nuclear war.

As the possessors of over 90 percent of the roughly fifteen thousand nuclear weapons on the planet, the United States and Russia have a special responsibility to maintain a stable strategic relationship and reduce nuclear risks. The two countries have a long history of working together in this area, to the great benefit of global security.

While some meaningful cooperation continues, such as adherence to the 2010 New Strategic Arms Reduction Treaty and implementation of the 2015 Iran nuclear deal, the risks of unbridled nuclear competition are unacceptably high.

Both sides continue to retain nuclear force postures that would allow each country to launch hundreds of weapons within minutes of a decision to do so. The two countries are also in the throes of ambitious, multi-hundred-billion-dollar efforts to sustain and replace their nuclear arsenals at levels that greatly exceed any rational defense requirement. Progress on further nuclear arms-control measures to reduce these bloated stockpiles is on hold, amid U.S. and Russian disagreements about missile defense, advanced conventional weapons and other issues.

To make matters worse, the United States has accused Russia of testing and deploying ground-launched cruise missiles in violation of the 1987 Intermediate-Range Nuclear Forces (INF) Treaty. Moscow denies it is violating the agreement, and instead has accused Washington of breaching the accord. In addition, U.S. and NATO officials have expressed concern that Russia is developing new nuclear weapons and lowering the threshold for when it might consider using them.

For its part, the Trump administration has yet to articulate a clear policy toward Russia or strategy to reduce nuclear risks. While President Trump has said he would like to improve relations with Moscow, and that global nuclear weapons inventories should be significantly reduced, he has also pledged to strengthen and expand U.S. nuclear capabilities, denounced New START, and reportedly responded negatively to Putin’s suggestion to extend that treaty.

At their meeting this week, Tillerson and Lavrov should discuss options the two sides can take to reduce the risks of nuclear use, reinforce existing arms-control mechanisms, and eliminate obstacles to new risk-reduction initiatives.

One option is to set the stage for Trump and Putin to issue a joint statement reaffirming the 1985 statement by U.S. president Ronald Reagan and Soviet leader Mikhail Gorbachev that “a nuclear war cannot be won and must never be fought.” The two leaders should also create a new channel for dialogue on issues impacting the bilateral strategic relationship, including missile defense, advanced conventional weapons and offensive cyber capabilities.

Second, Tillerson and Lavrov should begin discussions on extending New START and its verifications provisions by five years, as allowed by the treaty. The agreement, which verifiably caps the deployed strategic nuclear arsenals of each side, has increased in value as the U.S.-Russia relations have deteriorated. Extending the treaty would also facilitate discussions on further reductions in the U.S. and Russian arsenals, which would result in significant cost savings.

Third, the two countries need to work to preserve the INF Treaty. If the compliance concerns threatening the treaty are not resolved, it could unleash a costly new arms race in intermediate-range missiles, which will undermine security in Europe and Asia.

The key obstacle to resolving the compliance concerns is not the absence of options to do so, but Russia’s unwillingness to acknowledge U.S. concerns. To increase pressure on Russia and make it harder for Russia to deny a violation exists, the United States should be more transparent with the American people and U.S. allies about the nature of the violation, something the Obama administration was reluctant to do.

In addition, Tillerson should make it clear to Lavrov that so long as Russia remains in violation of the treaty, the United States will pursue steps to reaffirm and buttress its commitment to the defense of those allies threatened by the treaty-noncompliant missiles.

The downward spiral in the U.S.-Russia relationship makes the objective of reducing the risks of nuclear conflict all the more urgent. The time to act on this common interest is now, lest a dangerous situation grow even more precarious.

Kingston Reif is the Director for Disarmament and Threat Reduction Policy at the Arms Control Association, where Maggie Tennis is a Herbert Scoville Jr. Peace Fellow.