Pushback: Why the Five Eyes Intelligence Alliance Should Keep Chinese Investors at Bay 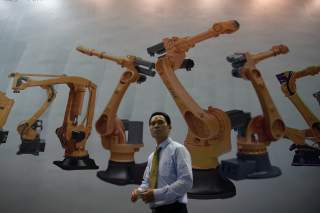 There has been a dramatic shift of investment into the West, which may have a deep impact on U.S. security and the country’s future way of life. According to a report recently published by the Henry Jackson Society, China is making massive investments into Western digital and critical national infrastructure, and Western states are not reacting in a coordinated or rational way. This article argues that those states can and should coordinate a collective reaction through the Five Eyes intelligence alliance. The Five Eyes—arguably one of the strongest and long-lasting intelligence coalitions in history—consists of five of the most robust liberal democracies in the West: the United Kingdom, Canada, Australia, New Zealand and the United States.

Bound by strong cultural links, these five states have seen off authoritarian communist dictatorships and global conspiracy theories from a range of directions. Following the collapse of the Soviet Empire and its satellites, the men and women who worked in the shadows to keep us safe during that time turned their attention toward failed and failing states. They also began defending us from corporate espionage and, now, the rise of domestic-based Islamist terrorism. While the members of this shadow group still work on those issues, a new one has presented itself, and from an unusual and unlikely direction—Chinese malicious investment.

A recent wave of Chinese investment presents the Five Eyes with a new type of threat. China’s state-owned enterprises have been making overseas investments and are shifting away from spending money on commodities in the developing world. They are now focusing on high-tech acquisitions and mergers in the advanced economies. Europe has seen a 44 percent increase in Chinese investment since 2014 and received $20 billion euros in 2016. Simultaneously, private Chinese capital has been ushered back inside the Great Wall, with Beijing imposing capital controls on its private firms. While one would presume that Europe, the United States and Australia would be grateful for these investments, it is the nature of these investments and the intentions behind them that are worrying experts across the West.

Rather than relying purely on internal subversion or hacking, this new wave seeks to displace Western states in the most advanced technologies and to own or control many of their telecommunications systems. Furthermore, there is a total lack of awareness by even the closest allies, desperate for investment. A few case studies illustrate the point: in 2016, a Chinese consortium, which included a major Chinese defense-industrial giant, AVIC, purchased a major stake in the United Kingdom’s largest data center, Global Switch. The UK government approved the deal, only to see Australia’s Department of Defense withdraw its data from Global Switch, citing the change in ownership. Then, in 2017, the Canadian government approved a takeover of Canadian satellite communication company Norsat International by Chinese telecommunications giant Hytera. Within weeks of the announcement by the Trudeau government, the U.S. Department of Defense was compelled to re-examine its contracts with the Canadian firm.

China has announced its intention to become the global leader in artificial intelligence, the primary technology upon which future militaries will depend. The outlines of Beijing’s strategy is backed by strong empirical evidence, ranging from China’s own stated economic strategy, Made in China: 2025, announced in 2014, to its latest cyber laws, which were announced in early July. The first sees a three-part strategy, with strong subsidies for Chinese firms entering foreign markets in artificial intelligence, high-tech developments and telecommunication companies. Although China is encouraging companies to make investments in these foreign-market areas, it is firmly shutting the door to prevent foreign firms from operating inside China—ultimately to gain hegemony over supply chains in the world’s most advanced technologies. The second shuts the door firmly on foreign investment in China’s digital infrastructure. A recent DOD report indicates a surge of Chinese state investment into American start-ups with cutting-edge military applications.

Germany’s decision in early July to restrict China from investing in sensitive parts of its digital economy and infrastructure should be a wake-up call for the Five Eyes nations. As one of the most open economies to foreign investment (according to the Organization for Security and Co-operation in Europe regulatory index), Germany is the last state to close the door to investment. The UK is mulling over the idea of establishing something like the Committee on Foreign Investment to the United States to supplement its current system. However, as it moves in that direction, it is imperative that the Five Eyes begin a systemic overhaul of what sectors are open to foreign investment. Certainly, those sectors are overly vulnerable now and should be protected from aggressive acquisitions by Chinese firms with People’s Liberation Army connections. The Five Eyes should:

• Consider an overhaul of the Five Eye working groups in telecommunications and artificial intelligence, give them greater prominence than they now have, and create stronger links between private sector actors and security agencies.

• Develop a better monitoring process for the Ministries of Economy; presently, governments capture statistics without giving much background information. They can and should provide more details to regulatory bodies.

John Hemmings is director of the Asia Studies Centre at the Henry Jackson Society.