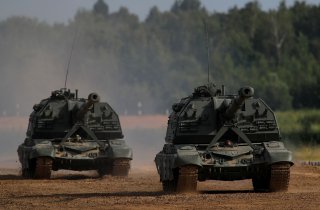 Much of the discussion in Washington and other Western capitals in recent days has been focused on Russian president Vladimir Putin’s supposed threat to use nuclear weapons in Ukraine, in response to challenges to what he perceives to be Moscow’s core national interests.

Yet as we ponder this specter of Russian deployment of its nuclear arsenal which, we are warned, could lead to a Cuban Missile Crisis II, we need to be reminded that a global superpower can cripple a small or mid-size power without resorting to the use of nukes. By just using the full force of its conventional weapons in Ukraine, Russia would force Washington into the same no-win situation it found itself in after the 1956 Soviet invasion of Hungary, when it concluded that saving the victim of Moscow’s aggression would require direct U.S. military intervention.

Contrary to our collective historical memory, the single most destructive bombings raid in human history was not the United States’ detonation of the atomic bomb over Hiroshima and Nagasaki, Japan, but the firebombing air raid on Tokyo by the U.S. Air Force during two nights in March 1945. That raid left an estimated 100,000 Japanese civilians dead and over one million homeless. By comparison, the atomic bombing of Nagasaki resulted in the deaths of between 40,000 and 80,000 people.

The many attacks on military forces as well as on civilian populations during World War II, including by German bombers and missiles that targeted British cities, and the devastating bombing of Berlin, Dresden, and other German urban centers by American and British air forces, were as much, if not more, destructive than the possible impact of a tactical nuclear bomb.

The United States and its allies dropped over 7.5 million tons of bombs on North Vietnam during the Vietnam War. While it brought Hanoi to the peace negotiations in 1972, the American bombings failed to force the North Vietnamese into submission and caused horrific suffering by the civilian population.

On the other hand, the aerial bombing campaign carried out by the North Atlantic Treaty Organization (NATO) on Yugoslavia during the Kosovo War in 1999, as well as the use of missiles to attack Belgrade and Pristina, marked a turning point in that war and forced the then-leader of Yugoslavia, Slobodan Milosevic, to agree to a peace deal, leading to his eventual downfall.

From that perspective, why would Putin use nuclear weapons before employing the full force of his country’s airpower and other conventional weapons, including missiles, in order to force Ukrainian leader Volodymyr Zelenskyy to agree to a deal that would secure Russian interests?

Putin would have to recognize that it’s possible that bombing Kyiv, Lviv, and other Ukrainian urban centers would fail to bring the Ukrainians to their knees, in the same way that the American carpet-bombing of Hanoi didn’t lead to a complete North Vietnamese surrender.

The Ukrainians’ courage on the battlefield could lead Putin to consider the likelihood that they would be willing to fight to the death.

Or perhaps, in the same way that Serbia’s Milosevic was forced to submit to Western demands following the demoralizing attacks on Belgrade and Pristina, Ukraine’s Zelenskyy would come under pressure from his people to reach a deal with the Russian devil.

After all, does it really make sense for the Ukrainian people to commit national suicide in order to prevent Russia from occupying four provinces in the eastern part of the country?

Ukraine doesn’t possess nuclear weapons that could threaten a global superpower like Russia. Even under the worst-case scenario from Russia’s perspective, Ukrainian forces wouldn’t be able to enter Moscow and impose a political solution to the war on the Kremlin. The only question is whether Ukraine will have the military capability and political will to force Putin to withdraw from occupied Ukrainian territories.

Moreover, employing nuclear weapons for the first time since 1945 is a risky proposition that could possibly trigger a Western military response that could ignite a full-blown world war and the possible use of strategic nuclear weapons, not to mention turning the entire international community, including China and India, against Russia.

Western military experts have been asking themselves why Russia, with more than 1,500 combat aircraft and extensive experience bombing targets in Syria and Georgia, has not taken advantage of its major advantage over Ukraine, its airpower, in the fighting in Ukraine.

Russia's failure to gain air superiority in Ukraine may reflect, as some analysts suggest, their lack of experience in using air power as a strategic tool, or more likely, the Russian air force has held back its full capabilities.

The bottom line is that while Russian forces would certainly suffer many casualties if they launch massive aerial assaults on Ukraine, the costs for Ukraine and its civilian population would be overwhelming.

Putin has already ordered a series of missile strikes against cities across Ukraine in retaliation for the blast that hit a key Russian bridge which he called a “terrorist attack.” This kind of broad aerial assault against civilians and critical infrastructure would be very much in line with Russian conduct in Chechnya, Syria, and Georgia, which is based on the use of massive military power while disregarding its impact on human lives.

It would certainly make a mockery of Putin’s pledge to integrate the nation’s brothers and sisters in Ukraine into Russia. But it would also reassert Russia’s military superiority over the Ukrainians and have Zelenskyy’s back against the proverbial wall.

President Joe Biden and his aides have made it clear to Moscow that a Russian attack against neighboring countries that are NATO members would trigger a direct military response and have sent signals to the Kremlin that the possible use of tactical nuclear bombs would prove to be costly for the Russians.

At the same time, the Americans have urged the Ukrainians not to attack targets inside Russian territory. But the Kremlin clearly believes that the key bridge linking Crimea and Russia that was attacked last week is located on their territory.

What would the American response be if and when Russia launches a massive aerial bombing campaign against major urban centers that could result in growing numbers of civilian casualties with the images of rising death and destruction broadcast daily on television screens and the internet?

Recall that similar images of civilian casualties in Bosnia and Kosovo forced then-President Bill Clinton to expand Western military intervention in the wars in the former Yugoslavia, a move which he had initially opposed.

Similar pressure could push Biden to move towards direct military intervention in the conflict, in order to save the lives of Ukrainian civilians by, for example, establishing a no-fly zone in Ukraine.

To put it differently, the current “normal” of providing military and economic aid to Ukraine without the need to deploy U.S. troops may not be viable in the long run if, as it seems, there are no signs of a diplomatic agreement on the horizon.

But as the war in Ukraine threatens to expand with the Ukrainians attacking targets inside areas annexed by Russia, which could trigger a  more devastating Russian military response, Biden and his NATO allies may find themselves in a position where the only choice available to them, if they want to protect the Ukrainian people, is direct military intervention in the war.

If that happens, and the United States ends up starting to suffer casualties in Ukraine and soldiers return to America in body bags, it could have a major impact on public opinion and Congress, especially as this escalation would then ignite fears of a world war involving the use of nuclear weapons.

Comparing the current war in Ukraine to the 1962 Cuban Missile Crisis is a form of intellectual laziness. The United States and its allies have not threatened Russia with the use of nuclear weapons and have insisted that they would not intervene directly in the war by using conventional weapons.

Indeed, that policy recalls the Western response to the 1956 Soviet invasion of Hungary or for that matter, on some level, to the American policy that followed the 1979 Soviet invasion of Afghanistan under which the United States provided military assistance to the guerrilla fighters there. In both cases, it was clear that the United States would not go to war with Russia, using either conventional or nuclear weapons, to save the Hungarians or the Afghanis.

It’s possible that Putin’s strategy now is to force the Biden administration, and in the process, Congress and the American public, as well as the United States’ European allies, to decide whether they would be willing to risk a direct confrontation with Russia in Ukraine, or back off and start putting pressure on Ukraine to make a deal with Moscow.