Putin Must Lead Russia’s Battle Against the Coronavirus 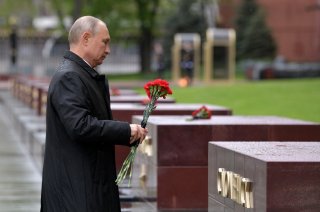 As Vladimir Putin re-writes the Russian constitution to extend his presidency by another sixteen years, he is tapping into the Soviets’ victory in World War II—still a deeply personal piece of history for most Russians, who suffered the greatest losses of any country during the war—to bring legitimacy to a reign that will last longer than Josef Stalin’s. But as today’s war against the coronavirus rages, Putin is too busy looking backwards to see a new chance to mobilize the Russian people.

After an initial downplaying of the pandemic, Russia is fast becoming one of the hardest-hit countries—now with over 200,000 acknowledged cases of COVID-19, making it the third most infected country in the world. But the Russian government has continued to suppress unflattering information about the effects of the pandemic, including the severe lack of personal protective equipment (PPE) that medical personnel have access to.

Moscow Mayor Sergei Sobyanin was one of several top Russian officials to immediately take advantage of the coronavirus for political ends, quickly blocking protests of Putin’s term-limit reset as Muscovites prepared for mass gatherings in March.

Sobyanin seems to have reversed course as of late, likely because his city appears to be the hardest hit of any in Russia. In late March, he made international headlines by becoming the first high-profile Russian official to contradict the Kremlin’s downplaying of the extent of the virus.

On May 7, Sobyanin went onto the state-owned television station Rossiya-24 to advise the public that the spread of the virus was still worse than reported—with an estimated 300,000 cases in Moscow alone, far above the reported 200,000 nationwide.

Those are grim numbers, but Sobyanin rightly recognized that it’s a good thing to have found so many from testing. “The fact that we have confirmed so many ill persons is not a minus, it’s a great plus,” he told Rossiya-24. “Obviously, the real number of those ill in the city is higher. According to the screening, they account for 2% or 2.5% of all Moscow’s citizens or nearly 300,000.”

Meanwhile, Putin’s government has modeled a culture of downplaying how serious the crisis is, and it’s keeping doctors from adequately speaking up about what tools they need and what precautions the public needs to take.

Dr. Alexander Shulepov went viral after posting a video of himself and another healthcare worker in which Shulepov says he’s been infected with COVID-19 and has been kept on shifts by his head doctor, preventing him from exercising necessary isolation to avoid infecting others. Two days later, Shulepov appeared in another video, posted by the regional health department, in which he claimed he was “emotional” when filming the prior video, and had now been removed from shifts and was being treated in a hospital.

Then Shulepov fell out of the hospital window and suffered a skull fracture, becoming the third doctor in just over a week to fall from hospital windows. The other two had died. Shulepov’s fate remains uncertain.

Russia, like the rest of the world, is facing one of its greatest challenges in recent memory. This is exactly the moment when President Putin should be leading from the front, encouraging the same kind of incredible national movement he likes to remember from the Great Patriotic War against the Nazis. Instead, he has delegated responsibility to his governors, secluded himself at his Novo-Ogaryovo estate outside of Moscow, and watched his frontline medical personnel fall out of windows after speaking up.

According to the Levada Center, an independent opinion polling group, the Russian public overwhelmingly distrusts both their government and its official information on the virus. However, this crisis is the perfect opportunity for Putin to restore some modicum of public trust and unify the country.

The virus itself is outside of the Kremlin’s control, but the way the Russian government responds to it is not. There are measures that should be obvious, like working to get medical professionals the equipment they need. But the starting place should be a basic acknowledgment of what is happening, who is affected, and what the government has done about it.

“Do not play down the consequences of the pandemic,” urged one local activist from Ufa. “Lying about the scale of the disaster is the worst that you can do for your countrymen in general, and for the relatives of those who died of COVID-19 in particular.”

Putin fears that the catastrophe of the coronavirus undermines his legitimacy just as he makes the claim that Russia needs him at the helm until 2036, so his natural impulse is to create a national culture of downplaying the crisis. But as things get worse, it will be impossible to hide this truth. Nearly every Russian knew someone wounded or killed in World War II, and it’s likely that everyone today will know someone who contracts COVID-19, if not getting it themselves.

Simply, Russian authorities have little to fear by acknowledging what everyone will be experiencing—if they speak the truth, people may even believe them.

Mayor Sobyanin seems to have shown a desire to meet this painfully low standard, and Muscovites are being given reason to trust what their city government says—this will be essential when the country does start to lift quarantines and finally re-open, with people likely returning to normal activities when they feel confident they won’t be infected by those around them.

But most Russians are receiving contradictory and incomplete information from authorities, and those who try to inform the public are being punished. Whatever chance at nationwide solidarity the country has is being wasted, and at exactly the time that it’s needed most. The irony of Putin celebrating the seventy-fifth anniversary of victory over the Nazis, an overwhelming past mobilization of the Russian people, is compounded by how liberally he’s squandering a chance at the same kind of national unity.

Doug Klain is a program assistant at the Atlantic Council’s Eurasia Center. He tweets at @DougKlain.