Is Putin Planning for an Arms Control Showdown 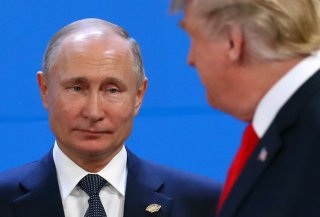 The United States and Russia are moving toward a showdown over arms control, even as both governments are struggling to contain the spread of coronavirus.

Although the pandemic has led to the two countries exchanging medical aid, nuclear tensions between the United States and Russia have continued to rise. With China emerging as the focal point of the arms control disagreement between Moscow and Washington, some Russian experts are predicting that the Kremlin will move to strengthen military cooperation with Beijing.

Signed in 1992, the Open Skies Treaty grants permission to its thirty-five signatories, including the United States and Russia, to conduct surveillance flights over each other’s territory.

Russia denied allegations that it had violated the treaty and accused the United States of behaving in a “dangerous and unpredictable” way. Nevertheless, Moscow has indicated that it will continue to observe the agreement.

For Russia, the Trump administration’s decision to withdraw from Open Skies is no big loss, said Viktor Murakhovsky, editor-in-chief of the influential Russian defense journal Arsenal of the Fatherland.

He explained that since both Russia and the United States gather most of their military intelligence from reconnaissance satellites, Moscow’s surveillance capabilities will lose little from Washington pulling out of Open Skies.

“I don’t think this decision will have any serious military impact, but there are, of course, political consequences from this decision, since yet another treaty aimed at reducing military threats and building trust between Russia and the United States has fallen through,” Murakhovsky said.

A more pressing question for Moscow, however, is the fate of the New START Treaty, a 2010 U.S.-Russian arms control agreement that imposed limits on the number of strategic nuclear weapons that the two countries are allowed to possess and deploy. The Trump administration has insisted on reworking the agreement to incorporate China, who is expected by U.S. intelligence to double the size of its nuclear arsenal over the coming decade.

Yet Beijing has repeatedly spurned the Trump administration’s call for a new trilateral arms control treaty, arguing that its nuclear arsenal of less than three hundred nuclear warheads is already far behind those of the United States and Russia, both of whom have around six thousand warheads.

Amid the uncertainty surrounding the New START Treaty, nuclear tensions between the United States and Russia are starting to rise. In early February, the Pentagon announced that it had begun deploying low-yield nuclear missiles on submarines. The Russian Foreign Ministry responded by warning that any attack on Russia involving these missiles would be met with a retaliatory nuclear strike.

Later that month, the Pentagon revealed that it had simulated a limited nuclear strike on Russia as part of a military exercise. The disclosure outraged Moscow, prompting the Russian Foreign Ministry to accuse Washington of “embarking on a highly dangerous game.”

In April, Trump appointed Marshall Billingslea, who previously served as assistant secretary for terrorist financing at the Treasury Department, as his special envoy for arms control. Billingslea has adopted an assertive tone during his first month in office, warning that the United States was prepared to spend Russia and China “into oblivion” in the event of a new arms race.

Although the Kremlin itself has admitted that Russia cannot outspend the United States, it has vowed to respond to a renewed U.S. arms buildup. Instead of racing to expand its missile arsenal, however, Russia’s leadership has opted to focus on developing new advanced weaponry.

“Putin has said many times that we will not be dragged into an arms race like the one that bankrupted the Soviet Union, instead our response will be asymmetrical and targeted,” said Andranik Migranyan, a professor at the Moscow Institute of International Relations and an informal adviser to the presidential administration.

“The United States has a defense budget of over $700 billion—Russia cannot allocate that kind of money for military spending,” he said. “So, Russia will focus on developing hypersonic missiles and other forms of deterrence that can adequately provide a response to American challenges at a lower cost.”

Migranyan added that for Moscow, the United States of 2020 is a less formidable opponent than the one of 1980. He argued that America today was too bogged down in confrontations with other adversaries to impose significant pressure on Russia. The Trump administration’s disputes with traditional U.S. allies over trade and defense spending, Migranyan contended, further weakened Washington’s ability to challenge either Russia or China.

“When the Trump administration simultaneously picks a fight with all its potential adversaries while also telling all of its potential allies to go to hell, the United States is in a worse position for a total confrontation,” he said.

Yet even as the Trump administration is ramping up the pressure on Russia, it is also counting on the Kremlin to support its bid for a new arms control treaty that would include China. Billingslea told The Washington Times earlier this month that the United States expects Moscow to “bring the Chinese to the negotiating table,” arguing that it was in Russia’s best interest to have China’s nuclear arsenal limited.

Russian deputy foreign minister Sergei Ryabkov, however, shot down that proposal in an interview last week, stating in no uncertain terms that Moscow had no intention of siding with Washington over Beijing.

“We have a strategic partnership with China, we greatly appreciate it,” he told the Russian newspaper Kommersant. “In a situation where the United States is a non-negotiable partner, the destroyer of the architecture of the entire arms control system, how can we participate in any intrigues in this area for the sake of ephemeral advantages and gains?”

Even before the Trump administration revealed that it was considering exiting the New START Treaty, Russia and China had begun cooperating on missile defense. Since 2016, the two countries have held annual computer-simulated anti-missile drills. Last October, Russian president Vladimir Putin announced that Russia was helping China develop its own early warning system for missile attacks, something that currently only the United States and Russia possess.

If tensions with the United States over arms control continue to escalate, then this sort of cooperation between Moscow and Beijing will only expand, Murakhovsky predicted.

“Just having Russia and China exchange information between their early warning systems will allow both countries to significantly bolster their security,” he said. “Additionally, China has a better opportunity to respond at sea since its navy is growing stronger, whereas Russia has better anti-air and anti-missile defense systems.”

Yet the geopolitical consequences of the collapse of the New START Treaty could be even more far-reaching, Migranyan asserted. He stated that whereas a Chinese-Russian military alliance would have once been inconceivable, both sides are starting to reconsider their long-held reservations on the subject.

“As a result of this push [by the United States] to force China to capitulate, I think that China for the first time is prepared to go for very deep military ties with Russia, perhaps even an alliance,” Migranyan said. “Neither China or Russia ever had the intention of going this route, but Washington’s policies leave them with no other choice.”