Putin Saved Assad, Will He Save Maduro? 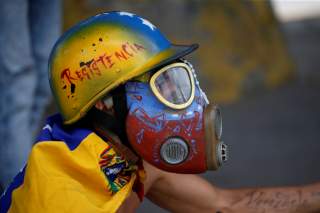 In the summer of 2012, Russia began using its navy to ship arms and materiel to Syria, evading Western efforts to block such lethal support using the international commercial shipping industry. Syria had been a client of Russia’s for decades, buying much of its weaponry from Moscow, allowing the Russian Navy access to a small naval facility at Tartus and Russian intelligence officers to serve in joint facilities in Damascus and elsewhere. Russia’s interest and influence in Syria had waned significantly since the Cold War ended. Vladimir Putin’s decision in 2012 to increase support for Assad was largely underestimated as a modest display of solidarity to an old friend and a cynical effort to exploit the Syrian civil war for financial gain. Most analysts, if not all, could not and did not predict just how far Putin would ultimately go to save Bashar al-Assad’s regime. Once again, the West misread Putin.

Is the West also misreading how far Putin may go to save Venezuela’s Nicolas Maduro? There are stark differences between Russia’s relationship with Syria and its relationship with Venezuela, both from historical and geopolitical standpoints, and Venezuela’s internal crisis has not yet descended into armed conflict. But there are also similarities, and as dire as the situation in Venezuela is at the moment, it still represents an important opportunity for Putin’s Russia to more deeply entrench its interests in Latin America in opposition to the United States and its allies.

After months of near-daily protests and over a hundred deaths, Venezuela is in critical condition as the remaining democratic institutions are dismantled or sidelined. The opposition boycotted the recent July 30 vote for a new constituent assembly, voted in to rewrite the constitution and, according to President Maduro, establish economic prosperity for the beleaguered nation. Of course, this was actually another extra-constitutional power move by Maduro, taking the country one more step towards full-blown dictatorship. With increasing international condemnation, inflation in the hundreds of percent, and the bolivar worth less than the online currency in World of Warcraft, many question why Venezuela, and specifically the national oil company, has not yet defaulted. Russia may be the answer.

The national oil company, Petróleos de Venezuela S.A. (PDVSA), brings in the vast majority of income for the country, up to 95 percent according to some analysts. This is not just from current deliveries of crude oil but also from prepayments of oil. For example, Russia has paid $6 billion in prepayments to PDVSA as of this year. As long as PDVSA remains in business, Maduro has a chance to stay in power if he can also keep control of the military. Maduro uses income from crude oil sales to import food and pay his military officers. He has also given the military control of food distribution, as a way to ensure loyalty. Not only do soldiers get fed first, but they can then sell food on the black market to supplement their income. As a consequence, the military has protected Maduro and his government from daily opposition protests since April.

The Price of Russian Patronage

Russia has provided $17 billion of credit or loans to Venezuela since 2006. Russia has a vested interest in Maduro retaining power in part because Venezuela’s opposition-led congress had decided that Russia’s potential acquisition of Citgo (49.9 percent) if PDVSA defaults would be illegal. Additionally, if Russia acquired such a large stake of Citgo, the energy company’s ability to operate in the United States would become complicated under recently imposed expanded U.S. sanctions against Russia, to say the least. Equally if not more significant, the collapse of Maduro’s government would cause Moscow to lose geopolitical influence in the Americas. Russia is one of Venezuela’s most significant military partners and since 2006 has been the principal supplier of technical military hardware to Venezuela, a portion of which was paid for with crude oil deliveries. Russian defense contracts to Venezuela were also set to increase prior to the 2014 drop in the price of oil and the consequent economic recession.

Rosneft, as a state-owned company, acts as Putin’s primary political arm in Venezuela and Russia’s creditor to Maduro. This relationship allows for a margin of flexibility in repayment, and Russia has several tools to help Maduro stay in power and ensure its interests are served. Most importantly, Russia can write off Venezuela’s debt, and there is precedent for this. Since 2000, Russia has written off or restructured the debt to eight states, totaling more than $120 billion dollars. For Moscow, loans serve less of a financial interest, and more of tool to build military ties and regional influence. Debt forgiveness keeps allied states in Russia’s orbit. Last month, the Russian state budget set aside $1 billion in expectation of losses or a possible haircut on Venezuelan payments. This indicates Russia does not have confidence in Venezuela’s ability to meet its next payment in October. However, before allowing the Venezuelan government to default, Rosneft, at Moscow’s direction, will write off or postpone the debt payment, or more likely strike a deal with Venezuela in exchange for smaller stakes in other oil projects.

Rosneft’s president, Igor Sechin, effectively serves as the nonofficial Russian ambassador to Venezuela, representing Moscow’s economic and political interests. He recently made several public statements reiterating Rosneft’s commitment to work with Venezuela and expressly stated assurances that the $6 billion in prepayments will be duly recompensed. “We expect the final repayment to be made in oil and oil product deliveries, which are ongoing strictly according to a schedule which we cannot provide to you. We expect full repayment before the end of 2019.” Talks about asset swaps are ongoing, and include a possible 10 percent ownership in the PDVSA Orinoco belt project at an estimated value of $600–800 million dollars. Thus, Russia is increasing its economic leverage over Venezuela with additional inexpensive acquisitions. If Maduro can somehow survive and stabilize the country, and if the price of oil has an upswing soon, Moscow will find itself in a lucrative position with significant regional influence. For Russia, support of Maduro constitutes a geopolitical power play, propping up an oppositional nation in America’s back yard and building influence in the region.

At least two main questions remain. First, if Maduro is unable to stabilize the country after gubernatorial elections later this year, which the opposition is viewing as its best near-term chance to block the further slide towards autocracy, what additional steps will Russia take to keep Maduro in power? In the past ten years, Russia has conducted small but not insignificant military exercises with Venezuela, and a “humanitarian intervention” at Maduro’s request should not be ruled out. Second, if Russia’s intervention, economic or otherwise, succeeds in cementing Maduro’s hold on power, what does Moscow expect in return? Putin understands the patronage game very well, and it should surprise no one that Moscow is carefully calculating its bet on Maduro.

Bill Bray is a managing director working with the firm’s Geopolitical Risk Advisory group in Washington, DC. A recently retired Naval Intelligence officer, he served as the Navy’s senior Intelligence Officer in Europe from 2012-2014.

Miyako Yerick is a senior associate and lead Latin America analyst working with the firm’s Geopolitical Risk Advisory group in Washington, DC. She is a 2012 graduate of Columbia University and a 2015 graduate of the University of Texas’s LBJ School for Public Affairs.

James Gregg is an Ankura intern working with the firm’s Geopolitical Risk Advisory group in Washington, DC. He is a Eurasian specialist and a Boren Scholar, graduating from the University of Florida in 2014 and the Moscow State Institute of International Relations in 2016.