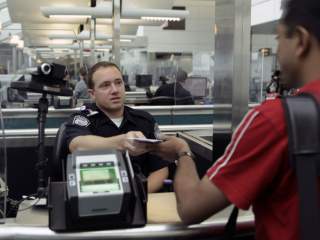 As a part of the Visa Waiver Program (VWP) citizens or nationals of thirty-eight countries, mainly in Europe, may travel to the United States without undergoing the more rigorous process of obtaining a visa. While the Visa Waiver Improvement and Terrorist Travel Prevention Act of 2015 sought to prevent refugees from Iraq and Syria with ties to terrorism from entering the United States through gaining nationality papers in one of the thirty-eight Visa Waiver Program countries, there is a glaring hole in this effort to secure the nation. Let us explain.

The VWP allows citizens and nationals from the selected countries to enter the United States after the travelers have submitted information to the Department of Homeland Security Electronic System for Travel Authorization (ESTA). Congress created the program in 1986, as a way of making it easier for travelers to enter the country without facing a lengthy visa process, which was deterring travel to the United States.

Over twenty million travelers enter the United States every year under the Visa Waiver Program. The program has been an economic success and also strengthened the cultural bond between the United States and friendly nations, but circumstances changed dramatically after the September 11, 2001 attacks, and have changed even more over the past year. In short, in their well-intentioned efforts to aid refugees from places like Iraq and Syria, northern European nations are likely putting American security at risk, by providing new identities to refugees who lack any way to prove who they are or where they come from.

The Case of Sweden and Germany

Sweden is currently experiencing an influx of 100,000–150,000 asylum seekers per year, primarily due to the country’s generous offer to guarantee permanent residency to Syrian war refugees. The actual number is hard to determine, as the influx varies heavily month to months. Of those who seek asylum, approximately 70 percent are granted permanent residency. The Swedish national immigration agency, Migrationsverket, is only able to determine the actual identity of approximately 60 percent of those who seek asylum in Sweden and receive permanent residency. That statistic is the agency’s own estimation, and is likely to be too high, as immigration officials often accept false documentation to facilitate the process.

German estimates suggest that at least one-third of asylum seekers falsely claim to be Syrians. Eurostat, the EU statistics authority, published a report in September 2015 suggesting that of those who seek asylum in Europe, 79 percent are not Syrians. The actual number is unclear, but a significant portion either claims to be a Syrian war refugee or provides a false identity, seeking an advantage in receiving asylum. It is likely that those who are not Syrians continue to Sweden, where the identification requirements are laxer than Germany.

Swedish immigration authorities have stated that fewer than 20 percent of asylum seekers have an actual passport. The rest are “identified” by providing supporting documents, such as college transcripts, tax documents, draft cards, contracts or letters. Reports suggest that asylum seekers will often discard their passports before entering Sweden, because they believe they are better off without identification and that asylum processing will be purely based on their oral presentation.

If available information is correct, it is likely that unverified immigrants to Sweden receive approximately twenty-eight thousand new identities each year. These immigrants can choose to either maintain their original name, date of birth, birthplace and former residency, or else fabricate a completely new identity. This makes it very difficult for the United States to effectively monitor a large number of potentially dangerous persons who may seek to enter the country.

Other countries that face the same problem of identification, but to a lesser extent, due to stricter regulations, are Norway, Germany, the Netherlands and Austria. All of these countries are in the Visa Waiver Program.

It is important to note that after five years as a permanent resident in Sweden, the former asylum seekers can become Swedish citizens, slipping through the security protocols that were recently added to the Visa Waiver Program. The United States’ prescreening process for the VWP relies on information presented by the European country. Thus, the Electronic System for Travel Authorization (ESTA) can be fed with bogus information in the form of an official European passport. Even if the individual is already on a DHS watch list or No Fly List, they can enter the country using the identity provided by Sweden or another European state.

While the probability of terrorists using this weakness in the system to enter the United States and conduct attacks is low, it is important to remember that it took fewer than twenty men to carry out the 9/11 attacks. In order to prevent such an occurrence, European states should share the identities of any asylum seekers whose identities cannot be rigorously verified. For the Visa Waiver Program to continue—with the mutual recognition of travel documents—European states must ensure that their inability to identify new residents does not put the United States at risk.

Adam Lowther is a Non-Resident Senior Fellow at the Center for the National Interest. Jan Kallberg is a Research Fellow at the UT Arlington.