Qatar Is at the Center of Today's Arab Tangle 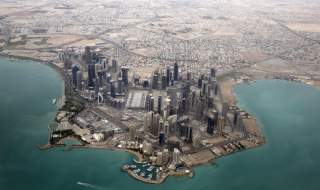 In early November, the Kingdom of Saudi Arabia’s defense forces intercepted a Burkan-2 ballistic missile targeted at Riyadh’s King Khalid International Airport. Yemen’s Houthi-controlled defense ministry has taken the credit for the launch—but given the extent of the Iranian sway over the Houthi military, the real responsibility for the attack lies with Tehran. Since the airport is a civilian installation and, as such, under international humanitarian law, cannot be attacked, the Iranian missile strike is also a war crime.

The missile attack against the Saudi capital is a major escalatory move, reflecting both the vigor of Tehran’s ambitions to dominate the Gulf and its current boldness in directly challenging the key American ally in the region. All of this underscores the importance of resisting Iranian regional ambitions, the task that requires strong American leadership and well-coordinated and bold actions by the Saudi-led Arab coalition. With this mind, it is all the more the imperative to unify the Arab coalition, which, in turn, requires the resolution of the ongoing situation with Qatar.

It has now been over three months since Saudi Arabia, Egypt, the UAE and Bahrain cut ties with Qatar and issued thirteen demands to the tiny island state. The key was that Qatar stop assisting the Muslim Brotherhood and other extremist movements in the Arab world, and end its support of Iran. Qatar has yet to respond to the demands, claiming that it is innocent of all charges, and that measures taken by the Saudi-led coalition are harming the fight against ISIS.

Most Western governments have failed to appreciate the reasons for this defiance: the Qatari leadership believes it is immune to military action by its aggrieved neighbors. This is because, as the Qatari emir told Charlie Rose in a recent appearance on 60 Minutes, it expects the United States would come to its aid, based upon the presence in Qatar of Al Udeid Air Base, the largest U.S. military installation in the Middle East.

A speedy but proper resolution of the standoff with Qatar is clearly in American interests. Consistent with President Trump’s May 20 Riyadh speech, and his just-announced plan of action against Iran, such a resolution must include Doha’s cessation of all forms of support for extremist Islamic movements and the end of its flirtation with Tehran.

Indeed, recent events demonstrate how radical Islamic movements of all stripes cooperate with Tehran in seeking to challenge American and Saudi interests throughout the Middle East and beyond. A few days ago, the CIA released a vast trove of documents captured during the 2011 U.S. raid on the Abbottabad compound, during which Osama bin Laden was killed. Among these documents is a seventeen-page paper, prepared by a senior Bin Laden aide, that details how for years Tehran has provided financial, logistical and operational support to Al Qaeda. The paper makes clear that, despite the profound religious differences between the extremist Sunni Al Qaeda and extremist Shia Iran, they share a central strategic interest in attacking American and Saudi interests.

The end of Qatar’s current policy is all the more essential now, given Saudi Arabia’s drive, launched by its new young dynamic leadership, to unify the Islamic world around an uncompromising position against all form of radicalism. The best way to resolve the Qatari crisis is for Washington to announce that the presence of a U.S. base in Qatar is not a security guarantee. Indeed, consistent with U.S. constitutional strictures, the only way such a guarantee could be provided by the United States is through a bilateral or multilateral treaty that requires Senate’s advice and consent. This, of course, has not taken place.

Doha’s transgressions against Saudi Arabia and other Arab states should come to an end. Qatar has funded most major extremist movements in the Arab world for the last ten years, attempting to overthrow the major Arab regimes. It has particularly supported the Muslim Brotherhood, apparently thinking that, if that group came to power throughout the Middle East, Qatar’s emir could claim a role of “Arab overlord.” By engaging in this form of power projection, Qatar seems to hope that it can challenge the Saudi monarch’s standing within the wider Muslim world.

This plan actually seemed to be working for a moment, when President Mubarak was overthrown in 2011 and a Muslim Brotherhood–linked government came to power in Egypt. As devastating as this was for the Egyptian people and the stability of the Arab world, Qatar’s leadership was ecstatic. It had funded and given refuge to Yusuf al-Qaradawi, the Brotherhood’s theological and spiritual leader—who has stated that the Holocaust is a “punishment” for the “corruption” of the Jews.

Similarly, the Qatari-funded Al Jazeera network is based in Doha, the country’s capital, and has been the voice of virulent anti-Americanism for over two decades. It was Osama bin Laden’s news venue of choice, and has also given a broadcasting platform to the leader of the terrorist Nusra Front, the murderous Al Qaeda affiliate in Syria.

The father of Qatar’s current emir was involved, together with Libya’s late dictator Qaddafi, in at least two assassination plots against the late King Abdullah and senior members of the Saudi royal family, as well as a botched plot to overthrow the Saudi government. Given this conduct, the Saudi-led coalition could certainly assert the right to use military force against Qatar under international law. Indeed, in the 1980s, the United States asserted that the provision of arms and other support by Nicaragua’s Sandinista government to insurgents in El Salvador constituted an “armed attack” under the UN Charter, justifying the use of military force. Although the International Court of Justice disagreed, this remains the U.S. legal position and is particularly appropriate for today’s Middle East, where states such as Qatar and Iran support terrorists and insurgents.

Legal issues aside, were a Saudi-led Arab coalition to decide to invade Qatar and force a leadership change, the United States might be unlikely to side with Qatar. Saudi Arabia is America’s most important Arab ally and one of its most consequential strategic partners globally; in our view, the kingdom has just cause for the use of force. Its military is also gaining valuable combat experience while fighting Iranian proxies in Yemen. Choosing between the Saudi coalition and Qatar would not be difficult for the United States, especially since the Al Udeid base could easily be quarantined from any military operations against Qatar’s meager defences.

David B. Rivkin Jr. served in the Departments of Justice and Energy and the White House Counsel’s Office during the Reagan and George H. W. Bush administrations. Nawaf E. Obaid is Visiting Fellow for Intelligence & Defence Projects at Harvard’s Belfer Center and a former advisor to the Saudi government.