Questioning the Case for War 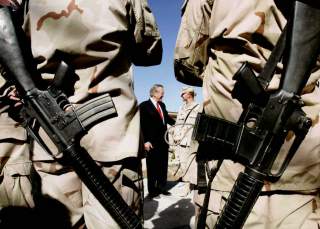 While much of the world is focused on the war avoided (temporarily at least) on the Korean Peninsula, I’ve been thinking about the one in Iraq that we failed to stop fifteen years ago—and the one that some still want to fight in neighboring Iran. The occasion for this reflection is the upcoming release of Rob Reiner’s “Shock and Awe,” a film about Knight Ridder’s Washington Bureau, one of the very few American news organizations that got the Iraq story right.

McClatchy, which acquired Knight Ridder in 2006, hosted an advanced screening this week at the Newseum. A discussion with Reiner and the four real-life characters who are the film’s main characters followed: DC Bureau Chief John Walcott, and reporters Jonathan Landay, Warren Strobel, and Joe Galloway. (McClatchy has compiled several of the stories featured in the film here).

I’ll have more to say about the movie closer to its official release (scheduled for July 13; it will be available on DirecTV starting on June 14), but two things from the movie and ensuing discussion particularly resonated with me: one, the deliberate and often deceptive way that hawks divulge information to build the case for war; and, two, the pressure that is exerted upon those willing to question it.

One of the touchstones of Knight Ridder’s journalism was the inclination of its reporters to challenge conventional wisdom and to seek out alternative explanations. In the post–screening discussion, Walcott explained that too many reporters rely on the statements of senior government officials, serving more like stenographers than thoughtful individuals attempting to uncover the truth. News organizations tend to assess the quality of information based on the seniority of the persons doling it out. In fact, the inverse may be closer to true: mid-level personnel with comparable access, but who are less invested in a particular course of action, are likely to divulge information that strays from the official narrative.

Such skepticism is particularly important in the run-up to war. The typical technique for discrediting the opposition often hinges on the claim that outsiders, lacking access to classified information, don’t have sufficient grounds to question the war advocates’ claims. Instead, we are all expected to defer to the judgement of a select few who purportedly have all the relevant facts.

But the hawks often determine what is “relevant.” In his reporting at the time, Landay noted that many within the U.S. intelligence community were highly skeptical of Bush administration officials’ claims. Whereas Secretary of Defense Donald Rumsfeld was dismissing the need for “concrete evidence” of Saddam Hussein’s WMD plans or ties to terrorists, “U.S. intelligence officials,” Landay wrote, “said evidence actually suggested that Saddam had been careful to keep al Qaida at arms’ length to avoid giving Bush an excuse to invade Iraq.”

President Bush said...that Iraq could make a nuclear bomb within a year after getting enriched uranium or plutonium. But Saddam Hussein has been unable to get that nuclear fuel for more than a decade.

Later in the story, Landay observes:

In fact, Bush’s charge . . . that Iraq has attempted to buy high-strength aluminum tubes for enriching uranium indicates that the country has only begun the years of work needed to reach production.

The evidence of a concerted campaign by the Bush administration to shape—and indeed, misshape—public attitudes on the nature of the Iraqi threat was equally apparent to Warren Strobel. “The administration squelches dissenting views,” he wrote, and:

intelligence analysts are under intense pressure to produce reports supporting the White House’s argument that Saddam poses such an immediate threat to the United States that preemptive military action is necessary.

“Analysts at the working level in the intelligence community are feeling very strong pressure from the Pentagon to cook the intelligence books,” said one official, speaking on condition of anonymity.

A dozen other officials echoed his views in interviews with Knight Ridder. No one who was interviewed disagreed.

Some of the more pernicious attempts to build the case for war with Iraq capitalized on Americans’ understandable post–9/11 anxiety. For example,

President Bush said that a senior Al Qaeda leader received medical treatment in Baghdad this year—implying larger cooperation—but he offered no evidence of complicity in any plot between the terrorist and Saddam’s regime.

While technically true, that too is misleading. Intelligence reports said the Iraqi ambassador to Turkey, a longtime Iraqi intelligence officer, made the offer during a visit to Afghanistan in late 1998.

In fact, U.S. officials said, that there is no ironclad evidence that the Iraqi regime and the terrorist network are working together, or that Saddam has ever contemplated giving chemical or biological weapons to Al Qaeda, with whom he has deep ideological differences.

Such skepticism is often unwelcome, however. The film portrays instances in which Knight Ridder papers refused to run the Washington bureau’s dissenting stories, opting instead to follow the lead of the New York Times, which mostly repeated the Bush administration’s line. The movie singles out the Philadelphia Inquirer, but Walcott admitted that other papers were equally reluctant to go against the grain. The American people wanted blood after 9/11, and Afghanistan wasn’t sufficient. Someone else had to pay, too. Those who pointed out that Saddam Hussein’s Iraq had nothing to do with 9/11 were, in effect, siding with a brutal dictator who terrorized his own people.

In another poignant moment, Strobel (played by James Marsden) is confronted by family members at a weekend cookout. They note that Knight Ridder was practically alone in questioning the Bush administration’s case for war with Iraq, and thinly suggested that he was both unpatriotic and naïve. You were born at the time of the Cuban missile crisis, his father reminds him. Do you want Saddam Hussein to threaten us today, as the Soviet Union threatened us then?

Those who tried to stop the United States’ march to war in 2003 can no doubt recall many similar incidents, when friends and spouses doubted our judgement, and even our motives. One would hope—given what we now know about that war and its phony pretexts—that Americans will be more skeptical of those now making the case for “regime change” in Iran.

Image: Soldiers from the 173rd Airborne stand while waiting to have their picture taken with U.S. Secretary of Defense Donald Rumsfeld (C, left) before he leaves for Baghdad, in Khandahar, Afghanistan December 22, 2005. Rumsfeld said on Thursday a rapid withdrawal of U.S. forces from Iraq or Afghanistan would spawn more terrorism in the region and raise the risk of attacks on the United States. Addressing U.S. troops on the second day of a visit to Afghanistan, Rumsfeld said "there are some in Washington who are questioning why our country is fighting this difficult war on terror half a world away". REUTERS/Jim Young