Rand Paul Found His Voice: Can He Find Noninterventionist Voters? 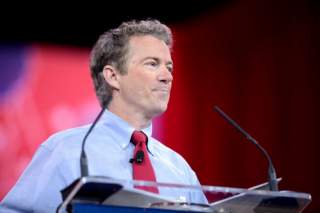 Rand Paul found his voice last night. He’s a sincere noninterventionist in foreign policy. If he can get that message across, there’s a Republican constituency for it, and even broader support among independents.

Coincidentally or not, Paul’s standing in the polls has fallen as he seemed to move away from the noninterventionist positions associated with his father, congressman and presidential candidate Ron Paul. He called for a declaration of war with ISIS, more military spending, and rejection of President Obama’s Iran deal.

In the debate Paul came out swinging on the risks of war and the failures of military intervention. He declared, “I've made my career as being an opponent of the Iraq War. I was opposed to the Syria war. I was opposed to arming people who are our enemies.”

He noted that “intervention sometimes makes us less safe…. sometimes the interventions backfire. The Iraq War backfired and did not help us. We're still paying the repercussions of a bad decision.”

He chided Carly Fiorina for her incredible promise not to talk to Vladimir Putin “at all,” saying that we need to talk to all the countries with which we have tensions, we “need to leave lines of communication open,” as Ronald Reagan talked to Soviet leaders.

Standing in front of Reagan’s Air Force One, he embraced Reaganism:

“I'm a Reagan Conservative. I'm someone who believes in peace through strength, and I would try to lead the country in that way knowing that our goal is peace, and that war is the last resort, not the first resort. And, that when we go to war, we go to war in a constitutional way, which means that we have to vote on it, that war is initiated by congress, not by the president.”

And most particularly in electoral terms, he set up the alternatives for voters:

“If you want boots on the ground, and you want them to be our sons and daughters, you got 14 other choices. There will always be a Bush or Clinton for you, if you want to go back to war in Iraq.”

That’s Paul’s best path to the top of the polls. All the other candidates supported the Iraq war (except Donald Trump) and threaten more military action today.

Carly Fiorina delivered a strong performance, but substantively it was frightening. While refusing to talk to the president of Russia, she would send more troops to the countries bordering Russia and “conduct regular, aggressive military exercises.” Threatening a renewed war in Iraq isn’t enough, she wants to take us back to the dangerous heights of the Cold War.

Marco Rubio is viewed as a knowledgeable foreign policy expert by neoconservative pundits, but his framework begins with “These are extraordinarily dangerous times that we live in.” That suggests a stunning ignorance of history. In the past century we dealt with Hitler, Stalin, the Cold War, the building of the Berlin Wall, the Cuban missile crisis, the long Vietnam war. Today our military is bigger than the next 10 militaries combined, and no power threatens us.

Bill Kristol told the Washington Post last year that Paul is “a lonely gadfly” on foreign policy: “Rand Paul speaks for a genuine sentiment that’s always been in the Republican Party, but maybe it’s 10 percent? 15 percent? 20 percent? I don’t think he’s going to be a serious competitor for guiding Republican foreign policy.”

Sixty-three percent of Republicans and 79 percent of independents told a CBS-New York Times poll in 2014 that the Iraq war had not been worth the costs.

As neoconservatives and Republican senators beat the drums for military action in Syria, Republicans turned sharply against the idea — 70 percent against in September 2013.

And of course a massive Pew Research Center survey in December 2013 found that 52 percent of respondents said the United States “should mind its own business internationally and let other countries get along the best they can on their own.” That was the most lopsided balance in favor of the U.S. “minding its own business” in the nearly 50-year history of the measure.

Kristol and his fellow pundits should read these polls. There’s more scope for a non interventionist or realist Republican candidate than they want to admit.

So far, of course, Paul isn’t reaching even the 10 to 20 percent of Republican voters that even Kristol concedes. But there’s a constituency there, and he may have started to reach it last night in a debate with “NFL-level ratings.”

Some observers did notice. Tim Carney of the Washington Examiner tweeted, “Rand Paul just gave the smartest comments on foreign policy from a GOP debate stage in decades.”

Jonathan Chait of New York magazine added, “Whoa, Rand Paul talking about foreign policy right now like a person who reads newspapers, not a character in an action movie.”

The debate transcript shows 205 mentions of Trump, 124 of Bush, and only 66 of Paul. He’s still struggling for visibility. But he’s found his voice – not just on foreign policy, but on marijuana, federalism, taxes, and the Constitution – and there are millions of Republican voters who share that range of views.

David Boaz is executive vice president of the Cato Institute and author of The Libertarian Mind.