Rand Paul Is Right About the Debt Crisis 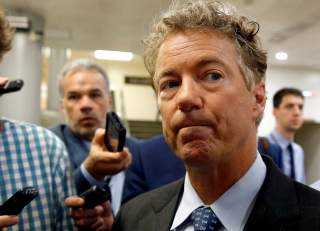 That was fast. The government shutdown ended almost before it began. The culprit for the mini-shutdown was Sen. Rand Paul of Kentucky who earned brickbats from his colleagues for holding up the massive spending bill until the wee hours of the morning. Sen. John Cornyn said Paul was being “grossly irresponsible.”

Paul was right to point to the perils of mounting deficits. “I can’t in all good honesty, in all good faith, just look the other way because my party is now complicit in the deficits,” Paul said. “When the Democrats are in power, Republicans appear to be the conservative party. But when Republicans are in power, it seems there is no conservative party. The hypocrisy hangs in the air and chokes anyone with a sense of decency or intellectual honesty."

Who could disagree? Paul Ryan, who decried deficits during the Obama era, has now performed a somersault. Less surprising is that President Trump, who referred to himself as the “king of debt,” during the campaign has now become the emperor of it. Trump tweeted this morning, “Just signed Bill. Our Military will now be stronger than ever before. We love and need our Military and gave them everything—and more. First time this has happened in a long time. Also means JOBS, JOBS, JOBS!”

A budget deal that includes averting a fresh standoff over the debt ceiling until March 2019 has obvious upsides, including providing some economic stability and assurance for businesses that the government won’t be shutting down. But the downsides are obvious. The deficit was already set to soar with the $1.5 trillion tax cut that Congress passed in December (and that Paul voted for). Now lawmakers have compounded the damage with a whopping 10 percent increase in domestic and military spending. The federal government is set to run trillion dollar deficits for years to come.

Paul, a follower of the Austrian school of economics led by Ludwig von Mises, has warned for years about the debt. Von Mises and others were deeply influenced by the example of the Weimar republic, when rampant inflation and unstable governments meant that Germans had to bring wheelbarrows of cash to pay for a cup of coffee. The stage was set for Nazism.

America not Weimar or even Greece. Until now, Paul’s contemporary warnings seemed exaggerated or even wrongheaded. When the American economy collapsed in 2008, for example, deficit spending was in order even as many Republicans complained about it. There was no way the economy was going to recover without a real stimulus. But why stimulate when the economy is already in full recovery mode? This is essentially what Trump and the GOP leadership seems intent upon—and why Paul is onto something.

The implications for both domestic and foreign policy are not trivial. If Trump is going to run huge deficits, then, for all his talk about cracking down on China, Trump is going to need Chinese investors to buy Treasury bills to finance the American economy. If foreign investors decide that America is a bad bet, borrowing costs will soar along with interest rates.

It’s also the case that Trump, who claimed he was going to take a hard look at America’s alliances, is ramping up military spending at a moment when Washington already spends more than the next eight countries combined. For the foreseeable future, he’s going to follow the Lyndon B. Johnson approach of spending on both guns and butter. But debt doesn’t come cheap. The result of Johnson’s policies was a decade of inflation. Not until Paul Volcker raised interests into double-digit territory was inflation curbed. The result was a recession. It could happen again.

Lawmakers can’t say they weren’t warned. Paul said that a “day of reckoning” will come. His colleagues view him as a nuisance, a gadfly. But Paul appears to relish serving as the conscience of the Senate when it comes to debt. He’s shown, as James Hohmann noted in the Washington Post, that a single senator can make a difference. In his words, “Somebody had to do it. I didn’t come here to be a part of someone’s club. I didn’t come up here to be liked. I didn’t come here to just say, ‘Hey guys, I’m going to be part of the club, so I’m going to do what you tell me to do.’” Good for Paul.