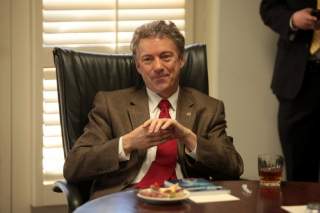 As he launches his campaign for the 2016 Republican presidential nomination, however, Paul is trying one Clinton strategy: triangulation.

Dick Morris, who ironically doesn't think Paul can win, is usually credited with coming up with the idea. "The essence of triangulation is to use your party's solutions to solve the other side's problems," Morris wrote in a 2003 book. "Use your tools to fix their car."

In practice, it frequently meant President Clinton positioning himself to the left of the Republicans and to the right of the liberal congressional Democrats. The most famous example of Clinton triangulating on a major issue is welfare reform.

Rand Paul isn't going to triangulate on most issues. A constitutional conservative, he will be competing with Scott Walker and Ted Cruz for who can shrink government the most. In his campaign announcement speech, for example, he called for a flat-out end to deficit spending.

Paul's rivals for the nomination plan to hit him on foreign policy. They will alternate between calling him an isolationist and a clone of Barack Obama, sometimes implying that the two charges are synonymous.

This is a stupid charge, since Obama has started two wars without congressional approval, escalated a third and unsuccessfully sought to launch a fourth while president. If that's isolationist, the term has lost all meaning.

In a Republican primary, it is probably more damaging to be linked to Obama than isolationism. That's why Iran was always going to be tricky for Paul -- he is the only major Republican candidate who has backed Obama's nuclear negotiations -- making it interesting to see how he was going to handle the issue on the campaign trail.

That's where triangulation comes in. Paul is positioning himself as not weak like Obama, but not as warlike as the rest of the GOP field. He claims to be using Ronald Reagan's tool -- peace through strength -- to fix the potential problem of a nuclear Iran.

"The difference between President Obama and myself -- he seems to think you can negotiate from a position of weakness," Paul said in his campaign kickoff speech. "Yet, everyone needs to realize that negotiations are not inherently bad, that trust but verify is required in any negotiation but that our goal always should be and always is peace not war!"

Paul continued to take that line in interviews. "I am somewhat skeptical of the president's agreement," Paul told NBC's "Today Show." "However, I am in favor of negotiations over war and I think I've been one of the reasonable people in our party who has not been beating the drums for war."

In the past, Paul has been most successful at persuading Republicans to accept a less interventionist foreign policy when his anti-interventionist and realist positions have also been anti-Obama positions. Notice that when speaking out against wars that have triggered chaos and spread jihad, he mentions Iraq (a Republican-initiated war he opposed) but emphasizes "Hillary's war" in Libya.

Now he is trying to pour cold water on his party's Iran hawks without letting them tie him to Obama. "At home conservatives understand that government is the problem, not the solution," Paul said. "Conservatives should not succumb to the notion that a government inept at home will somehow succeed in building nations abroad."

That sums up Paul's candidacy in a nutshell: pushing the most consistent limited-government message in the Republican field while gingerly applying those principles to foreign policy, where Republicans have traditionally had more faith in government (and which conservatives agree is a constitutionally legitimate government function).

With any luck, that's how a President Paul would govern, maybe with help from the foreign-policy advisers hawks are trying to get pushed out of Jeb Bush's campaign team.

W. James Antle III is managing editor of the Daily Caller and author of the new book Devouring Freedom: Can Big Government Ever Be Stopped?