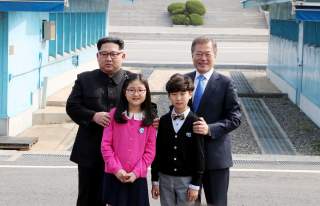 The Kaesong Industrial Zone (KIZ) was meant to be a small bastion of legitimate, white-market behavior in North Korea. It would act as a symbol and example of cooperation and what North Korea could be. North Koreans working in and near it would see modern production and management techniques. These might inspire them to start their own small businesses, while the North Korean government might similarly be taught a bit more about modern capitalism, and so become more tolerant of it.

North Korean workers interacting with regular, blue-collar South Korean employees and managers would be similarly enlightened. The Northern workforce would see that South Koreans were simply regular people who knew far more about modern production and economics than the North Korean government would ever admit.

It was a noble experiment. No one really knew what would happen if South Korean institutions—even just mid-size companies making basic textiles—operated at scale in North Korea. Given the extreme nature of North Korean totalitarianism, there was some genuine, not unfounded, hope that the KIZ would be something revolutionary. North Korea is so secluded and isolated that Kaesong might come to be the small breach in the wall which catalyzed change in the North.

Unfortunately, the Kim family dynasty realized all this too. Western media often mistakenly portrays the Kims as mad or wild partiers, while the analyst community has pushed back on this by arguing that they are in fact brutally rational. And here we see that rationality in action. The Northern elite fairly quickly made the same analysis presented above. They know that East Germany’s greater openness to information from West Germany during the Cold War helped lay the groundwork for the popular anti-communist movement of 1989.

Accepting the KIZ then, became a trade-off for the North. Would the benefits outweigh the possible costs listed above? The North took dramatic steps to alter that calculus. The North insisted that its government, not the North Korean workers in the KIZ, be paid for their labor. Pyongyang would thus capture around $100 million a year in legal tender, while it, in turn, would pay the KIZ workers in near-worthless North Korean people’s won.

Because money is fungible, hawks and opponents of KIZ quickly noted that these monies could be used to help North Korea’s nuclear ambitions. Moreover, since these dollars are legal, they can be used to launder who knows how much of the North’s illicit gains from smuggling and so on.

As the upside benefit rose from ripping off the KIZ workforce, Pyongyang also reduced the downside cost by walling off the entire KIZ and enforcing extraordinarily strict security protocols. For example, only women would be allowed to work there, in the belief that, in North Korea’s very patriarchal society, they would represent less of a threat than a male workforce exposed to South Korea. The KIZ became what development economists call an “enclave economy”—a tiny space of capitalism, highly controlled and strictly walled off from the rest of the underdeveloped economy around it. Furthermore, the regime would take extraordinary measures to prevent any spillover of market behavior. No small shops or restaurants would be permitted to spring up near the site to serve the labor force. The workers would not acquire bank accounts. They would have no organization or rights, and of course, they would not be paid by their employers.

All of this undercuts the Southern rationale for the KIZ experiment. For the South, the social and political benefits evaporated as North Korea turned KIZ into a highly isolated cash cow. For the North, it became an easy way to score legitimate money and U.S. dollars above all. By 2016 when a conservative government closed it, there was really no reason to keep it open other than inertia and an increasingly desperate hope that KIZ represented inter-Korean progress or hope. But after twelve years of operation with little on the South Korean side to show for it—beyond modestly cheaper clothing for export—there was no real argument for keeping it open. The experiment had failed. The Kims had vigorously seen to that.

All of which brings up to the current South Korean government’s effort to re-open the KIZ. The debate over this is painfully familiar. President Moon Jae-In wants interaction with the North to widen his détente efforts with the North. But there is no indication that the dilemmas raised above have improved. The North will almost certainly still seal off the facility, demand direct payment in U.S. dollars, vigorously police any market or liberalization spill-over into the surrounding community, and so on.

A re-opening would raise the same problems all over again—lots of easy money to keep the regime afloat with little to show for it and tension with the Americans over this as sanctions-busting. South Korea is sovereign and can push this through of course if it really wants it. But its allies and most of the Korea-watching community will once again balk. Can Moon at least get some major concessions from the North for this no-strings-attached 100 million a year? Otherwise, it is just a giveaway.