Is the Real Legacy of Protests in DC Spreading the Coronavirus? 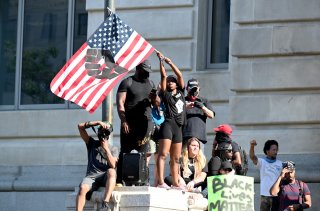 On Saturday, June 6, thousands of people streamed into the nation’s capital in the largest demonstrations yet protesting the recent death of George Floyd. With signs and banners in hand, protestors led marches from the Lincoln Memorial and the Capitol Building into downtown Washington, congregating around Lafayette Square and stretching many blocks down 16th Street.

The energetic and overwhelmingly peaceful tone of the demonstrations was a far cry from the initial spasm of rioting, looting, vandalism and arson that took place during the first weekend of protests and belatedly prompted Mayor Muriel Bowser to impose a city-wide curfew. Signs of that early violence are ubiquitous, however, with many buildings boarded-up, windows shattered and walls covered in profanity-laden graffiti. The White House complex and Lafayette Square are encased like a fortress behind over a mile of tall, black metal fencing and heavy concrete barriers.

Outside those barriers, a festival-like atmosphere largely prevailed on Saturday. Protestors sang and chanted. Impromptu outdoor concerts sprang up. Volunteers handed free snacks and bottled water to passersby. Even food trucks, in anticipation of the large turnout, lined along 16th Street awaiting customers. With the streets packed full, social distancing became totally non-existent. If not for the prevalent use of face masks, one could almost be forgiven for forgetting that the city is still in the grip of a deadly, once-in-a-century pandemic, one that has now killed 110,000 Americans—and counting.

This surreal scene was accompanied by the presence of Humvees and military personnel alongside police, ordered there by President Donald Trump. Fears of Lafayette Square suddenly devolving into a Tiananmen Square-style bloodbath have proven entirely unfounded. As with the tear-gassing of peaceful protestors last week and Trump’s bizarre Bible photo-op at St. John’s Church, the military presence in the streets of Washington now feels more farcical than menacing, the work of an image-conscious president—one who is more concerned with projecting the image of law and order than quelling any actual violence.

Contrasted with last week’s violent confrontations, the law enforcement agencies watching over Saturday’s demonstrations kept a surprisingly low profile. National Guard members simply milled about for much of the afternoon. Protestors paid them little attention, and Guard members returned the favor. On more than one occasion, I witnessed protestors engaged in friendly conversation with law enforcement. One woman handed a police officer a bottle of water for refreshment. Such scenes unfolded, of course, against a backdrop of anger and street chants of “defund the police.”

While the focus of the demonstrations ostensibly remained on police brutality and systemic racism, the fury of the protestors against President Trump was palpable—and perhaps a partial explanation for Saturday’s large turnout. Alongside the “Black Lives Matter” signs were those bearing such edifying messages as “Not My President,” “Fuck Trump,” and “Bunker Bitch”—a reference to news reports last week that Trump had reacted to demonstrations by seeking refuge in the White House bunker.

Trump, for his own part, has done little to bridge these political divisions and even seems to welcome them—in fact, revel in them. The urban unrest has proven a convenient foil for his image as the “law and order” candidate of 2020. Trump spent the weekend denouncing the mostly peaceful protestors near Lafayette Square as “terrorists,” downplaying the size of the demonstrations and tweeting against DC’s “grossly incompetent” Bowser. Not to be outdone, Bowser engaged in her own form of political trolling Friday morning by naming 16th Street—directly in front of the White House—Black Lives Matter Plaza. As if this alone did not convey the message, DC municipal workers then painted “Black Lives Matter” in giant yellow letters directly on the pavement. Politics as theater.

Throughout Saturday afternoon, protestors along Pennsylvania Avenue chanted in unison “this is what democracy looks like!” Indeed, the present unrest perfectly encapsulates American democracy today, a system rent with division and dysfunction. For all the dysfunction, however, perhaps nothing can explain the scale of the weekend’s demonstrations more than the coronavirus itself. Saturday’s crowds were predominantly composed of young people—twenty- and thirty-somethings who were no doubt antsy after two months under lockdown. With DC’s indoor restaurants, bars and clubs still closed and large social gatherings still prohibited, the protests have offered young people a convenient weekend diversion around social-distancing restrictions. But is it a safe one?

As I left the protests late Saturday afternoon, a group calling itself “White Coats for Black Lives”—a group composed of nurses and doctors in scrubs—marched past holding signs declaring “racism is a public health crisis.” That may very well be true, but as New York Times columnist Ross Douthat recently wrote, the novel coronavirus doesn’t care about one’s political leanings or the righteousness of one’s cause. As public health officials have repeatedly warned, a second wave of infections remains a very real threat—now amplified by this week’s nationwide protests. Will that turn out to be their true legacy?

Jordan Henry is the executive assistant at the Center for the National Interest and a recent graduate of the London School of Economics.