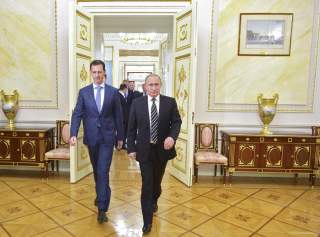 It has been four years since Russia got involved in Syria’s civil war. Since then, Moscow has been able to help Syria’s dictator turn the tide of war. But the historical relationship between Moscow and Damascus has often been overlooked and understated in explaining why Russian president Vladimir Putin aided Syrian president Bashar al Assad.

Cooperation between Syria and Russia predates the Cold War rivalry between Russia and the United States and the sectarian and geopolitical conflict between the Sunni and the Shia in the Middle East. Bilateral relations were actually established as Syria gained independence from the French and became an independent state.

The support of the Soviet Union provided advantages to the newly created Arab states. Proclaiming independence did not eliminate all of the former colonies’ problems, especially those stemming from their connections with their Western colonizers, who were not happy to accept geopolitical changes without due compensation. In these conditions, the newly established Arab nations became interested in the Soviet Union.

When Syria became independent, it asked for the withdrawal of Western soldiers from its territories. This was a complicated request that caused minor military confrontations. But the Soviet Union supported Syria’s demands. Both Syria and the Soviet Union's interests coincided with the desire to preserve the security of their borders. In the course of the debates of the UN Security Council, and the Soviets note of July 1, 1945, the Soviet Union insisted on the need to resolve that question, giving legitimacy and attention to Syria’s request. This posture was the first significant Soviet political action in the Arab world since the Second World War.

Soviet political policy combined a moral foundation with foreign policy objectives to expand its influence. On the one side, the Soviet Union made an effort to support the liberation movements of the Arabs. This originated from Soviet histories and experiences, which induced them morally to fight for the struggles of nations. On the other side, the Soviet state, with its totalitarian character and despotic ambitions, appropriated that morality, while concealing their expansionism, which was growing exponentially since the end of World War II.

When cooperation between Syria and the Soviet Union intensified, after the Baath party came to power in 1963 under Salah al-Din al-Bitar, again it was a Sunni who was in power. The Baath party proclaimed to emancipate the Arab population while deemphasizing religious differences. From the 1960s, the Soviet Union contributed to the creation of a national industry in Syria, with scientists, engineers and machinery for its development. Soviet help with the oil industry, the construction of railways and agriculture was key for the Syrian economy.

But Syria needed to guarantee its sovereignty and this is where Moscow’s military cooperation started to play a role. The USSR sent military instructors, armament, and Soviet military personnel to Syria. During the Six-Day War in 1967, Moscow provided unconditional aid to the Arab nations.

In the outbreak of the June War, 1967, Moscow condemned Israel asking them to withdraw their troops. But it was back in 1967 when Moscow was given widespread access to Syrian ports, in both Latakia and Tartus. The port in Tartus would become the naval base which has been crucial for Russia to conduct its operations in support of Bashar al Assad and to have a presence in the Mediterranean.

When Syrian prime minister Yusuf Zuayyin visited the Soviet Union in April 1966, both Damascus and Moscow agreed to oppose imperialism and later reached an accord for the education of Syrian political and technical cadres in the Soviet Union. Many of these individuals would occupy key posts in Syrian governance and in the state. For example, half of the general direction of the Baath Party prior to the Civil War spoke Russian. The presence of people with education in the Soviet Union has been prominent in the Syrian Military.

Syria’s position as a main Soviet partner in the region in the 1970s had a background of strong cooperation in the 1950s and an expansion in the following decade. From 1967, links between the Baath party and the Communist Party of the Soviet Union were established. While the coup d’état in Damascus that brought Hafez Assad to power was initially perceived with preoccupation and caution by the Soviets, these worries would quickly dissipate.

Syria became an even more staunch supporter of Moscow in all topics of the bipolarity of world affairs, it was decisively in favor of bilateral economic cooperation (the first hydropower stations in the Euphrates were finished in 1973), interested in military cooperation (requiring a balance in arms with Israel), and in local Arab matters.

When relations between the Soviet Union and Egypt became cold under Sadat, Syria became the main partner of the Soviet Union in the Middle East. Given Syria’s more staunch position with respect to the Arab-Israeli conflict, the Soviets took even less flexible positions. Yet, Soviet advisors attempted to moderate the discourse and action of their most important ally.

Military cooperation between Damascus and Moscow was formalized in 1980 with the Treaty of Friendship and Cooperation in which the Soviet Union became committed to the defense of Syria in case of an attack on its sovereignty. This treaty was the culmination of the development of their historical relations over the decades. It signaled the strategic importance of Syria for Moscow, establishing nearly equivalent relations that the Soviets had with Poland or Czechoslovakia.

But relations between Russia and Syria did have contradictions. Moscow did not support the introduction of Syrian troops to Lebanon in 1976 and the Soviets were neither consulted nor informed. Moscow also understood Syrian enmity towards Iraq as damaging to the Arab cause. This also diminished the possibilities of Soviet policies in Iraq. The Soviets did not have a real desire to partake in the 1973 Arab-Israeli War, since they did not want to risk detente with the United States. Still, they were forced to make minor contributions like transporting Moroccan units to the Levant.

While Moscow viewed the PLO, as a lever against the West, they did not confront Syria’s enmity with them. After the Syrian army attacked the PLO in October 1976, only the Soviet Committee of the Afro-Asian Solidarity declared it did not understand why Syria attacked their natural allies. Even if the Soviet Union did not agree with Syria’s actions, the Communist Party of the Soviet Union was not willing to risk the relationship either.

In the 1990s, bilateral relations were weakened because of Russia’s internal problems. The rupture of relations between the United States and Syria in 2003 coincided with the rapprochement between Moscow and Damascus. In 2005, Moscow forgave nearly 80 percent of a $13 billion debt that Damascus owed Russia. This removed some difficulties Moscow and Damascus were having in their relations.

It is essential not to ignore the historical relationship between Damascus and Moscow, which predated the Cold War and became intensified by it. It would be foolish to forget the political, personal, and cultural connections that were developed between these two countries over the decades. There is a reason why Bashar al Assad’s son was learning Russian, and it was not because of the Russian military intervention. The history between the two countries explains why Putin decided to intervene in 2015.

Carlo J. V. Caro has an M.S. in Security Studies and an M.A. in Islamic Studies from Columbia University. He researches U.S. Foreign Policy and Terrorism.