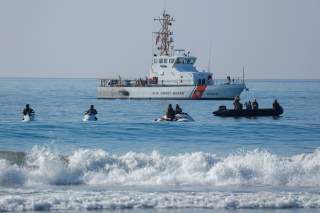 President Donald Trump is concerned about border security, which should cause him to call for building a wall, that is introduce new barriers to illegal entries, not on the southern border, but along the beaches running from Maine to Key West, and from Seattle to San Diego. U.S. land borders are protected by fences (real and virtual), and thousands of border guards. You cannot board a plane without being screened and all too often even patted down, sometimes even if you are a baby in diapers or an infirm senior citizen in a wheelchair. However, U.S. coasts are wide open.

I first noted this when a relative of mine sailed with a group of friends from Isla Mujeres in Mexico and disembarked in St. Petersburg, Florida, without anyone checking her identification or the luggage she and her fellow travelers brought. I recalled that when I was sailing in the Caribbean, we docked one night next to some twelve other boats, abutting what can only be described as a floating bar. At the bar I met a number of boat owners and their guests, several from nations in which terrorists are often found. I could have readily given a ride to any one of them—and whatever was in their luggage—or agreed to carry a “gift” back to the United States. When I returned to the United States, my boat was not checked.

I met a former head of the U.S. Coast Guard at a meeting at the Charleston Plaza, in Charleston, South Carolina. I asked him, “If someone sails hundreds of miles away from the United States, visits another country, and returns, is he or his fellow passengers and crew ever checked?” (I was referring to the many tens of thousands of people whose homes about a beach and have a private dock and a boat).

“No,” was the short response. In effect, each year about two million leisure (and fishing) boats make such journeys, and “there is just no way to check them all.” He added “If the boat comes from Colombia, or there is specific information that it might be carrying contraband, it surely will be stopped, most likely by the Coast Guard.” I checked with a lawyer at the Naval War College, and she relayed that indeed this was a “weakness” in the defense of our borders.

No passport is needed, no visa has to be obtained, no customs declarations need to be filled out, no luggage is examined, if one arrives in the United States as a passenger on one of these two million boats. True, the law states that “operators of small pleasure vessels, arriving in the United States from a foreign port or place to include any vessel which has visited a hovering vessel or received merchandise outside the territorial sea, are required to report their arrival to CBP immediately.” (Sec 19 U.S.C. 1433).  The law requires that “the master of the vessel reports their arrival at the nearest Customs facility or another such place as the Secretary may prescribe by regulations.” However, the law is not enforced; indeed, most people do not even know about it.

True, in some parts the Coast Guard is attempting to control the flow of boats, especially in areas in which illegal immigration is rampant, such as the waters next to San Diego and, in the past, in parts of Florida. However, if one is truly concerned with security, hence especially with the inflow of terrorists, one cannot but note that setting such a high priority further tightening security on the land lanes and air travel ignores how poorly our coasts are protected.

Amitai Etzioni is a professor of international affairs at The George Washington University. His book, In Defense of Patriotism, will be published by University of Virginia Press this summer.