Realism in the Arctic 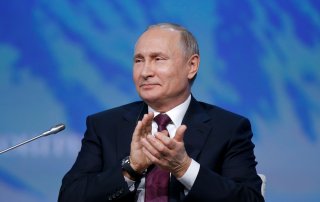 The Russian Arctic town of Verkhoyansk recently set the unenviable record of having the first recorded temperature above 100 Fahrenheit. Record warming and its impacts come as the Arctic is increasingly seen as another venue where broader geopolitical tensions between the United States and Russia (and China) are playing out. Recent reports of Russian bounty payments on the U.S. military in Afghanistan have raised these tensions to new heights. Nonetheless, the US should be open to areas where constructive cooperation in our interest with Russia can be maintained. The Arctic is one if near term opportunities for statesmanship can be seized.

The consequences of Arctic thawing include permafrost and infrastructure damage, large losses of summer sea ice, a migration of species and pests to the North, and detrimental impacts on the way of life of Arctic Indigenous communities. Coupled with the health impacts of the coronavirus on small, poorly served and isolated communities, the Arctic has been hit by a collapse in shipping, falling oil and gas prices, stoppages of energy and mineral exploration, and a tourism industry that will take years to recover. These challenges are interlocking, global in impact, and they are not subject to short-term amelioration.

Russia and China are now viewed as strategic competitors by the United States. There are increased levels of Russian military activity in the Arctic, new Arctic Ocean sea routes such as the Northern Sea Route above Russia are opening with accompanying strategic issues, and the vast Arctic energy and raw material resources remain to be exploited.

Until recently, the Arctic appeared to be a region where scientific and other peaceful cooperation seemed an exception to broader geopolitical tensions. Scientific research and environmental action under the auspices of the eight-member state Arctic Council and its six Indigenous Permanent Participant organizations were producing excellent results buttressed by the consensus that the effects of climate change and rapid ice melt were too large for any one country to manage and that science-based diplomacy and cooperation were best to resolve or at least manage the looming issues. Prohibited from examining hard security issues, the Arctic Council facilitated the convening of a Coast Guard Forum to deal with search and rescue missions in the infrastructure-poor Arctic Ocean and a separate Arctic Security Forces Roundtable brought U.S. and Russian military representatives face to face.

The situation began to change after Russia’s 2014 annexation of Crimea, military support of separatism in eastern Ukraine, and shoot-down of a Malaysian civilian airliner over the conflict zone. Relations with Russia nosedived, and the Arctic was impacted by U.S. economic sanctions which prevented American firms from participating in Russian Arctic oil and gas development. The United States also broke off the mil-mil contacts. Still, cooperation proceeded on issues related to Arctic sustainable development, health and wellbeing, and biodiversity. A new interstate agreement was signed on scientific cooperation (2015), a polar code for Arctic shipping was reached through the International Maritime Organization (2017) and a Central Arctic Oceans Fisheries Agreement was signed in 2018 to preclude commercial fishing in this region until science provided guidance.

Despite these successes, the most serious signal of declining Arctic Council cooperation and consensus was the failure (largely attributed to U.S. objections about the inclusion of language on climate change) of the Arctic Council Ministerial meeting to reach an agreement last year in Rovaniemi, Finland on a Ministerial Declaration, a first since the Council inception in 1996.

The Arctic is the highest priority strategic national interest of Russia. Arctic oil and gas resources are essential to Russia’s economic future as is the defense of its territory along its four-thousand-kilometer Arctic coastline. Key military assets protect its second-strike nuclear capability based on the Kola Peninsula. Russia has refurbished Soviet-era air and naval installations and built new ones, augmented troop presence and conducted extensive maneuvers, installed modern radar and electronic warfare capabilities and developed a new overarching Arctic military command. Moscow argues these are defensive measures to deter possible Western threats to Russian sovereignty and protect the Northern Sea Route and its Arctic resources. This stance is part of President Putin’s broader narrative about hostile U.S. and NATO intentions towards Russia and allegations about U.S. hegemonic aspirations.

The United States sees the Arctic as a low-risk conflict zone but with concerns, the Russian military augmentation goes beyond defense and aims to neutralize NATO naval forces operating in the North Atlantic approaches to Russia. The United States has responded with its own military maneuvers,  plans to add six icebreakers to its very limited fleet and at last year’s Arctic Council Ministerial, Secretary of State Pompeo introduced hard security issues as he sharply criticized the Russian military buildup and charged Russia and China with aggressive intentions in the Arctic.

In short, the situation today in the Arctic shows both traditional cooperation and increasing competition leading to more uncertainty.

The U.S.-Russia relationship is bad and both Russian and U.S. officials do not see the situation changing soon. The number of issues is daunting: Iran, North Korea, Ukraine, Russian interference in U.S. elections, and the future of arms control, specifically whether the two sides can agree to renew the New Start nuclear arms control agreement. Presidents Donald Trump and Vladimir Putin do speak regularly but the level of diplomatic contacts is a shadow of what previously existed. And with both countries reeling from the coronavirus onslaught, the impetus to turn inward grows.

We are cognizant of these deep divides but believe it is in our interest to be open to areas of cooperation where we can benefit. Arms control heads the list but the Arctic should be included for several reasons, including timing.

Russia assumes the rotating chairmanship of the Arctic Council for two years in 2021 and will want to demonstrate a successful stewardship. Moscow’s agenda will focus on economic development as well as scientific and environmental cooperation but it could be open to initiatives to show peaceful intentions. The current world economic recession and a sharp drop in energy prices have taken the steam out of expectations for near term development of Arctic energy resources. And the November U.S. presidential election may lead the next president, no matter who wins, to look for ways where progress with Russia may be possible. Enhanced dialog on Arctic issues should be high on the list.

First, the United States should resume high-level military to military contacts on the Arctic. This would not reward Russian aggression in Ukraine or its reported reprehensible steps in Afghanistan. Rather, a hard security dialog over the Arctic could give us a better understanding of the aims of the Russian military buildup and reduce the risk of incidents leading to unintended consequences. Second, the United States should explore discussions on whether the Northern Sea Route is an internal passageway as Russia contends or an international waterway governed by the UN Convention of the Law of the Sea as the United States contends. Russia has taken steps to enforce its interpretation which the United States views as a violation of the right to freedom of navigation guaranteed under the UN Convention on the Law of the Sea. And third, we could explore a code of conduct for the Arctic Ocean building on the 1972 U.S.-USSR Incidents at Sea Agreement which remains in effect.

The United States and Russia have disagreements on many specific issues and more broadly on the organization of the international system. No “reset” in relations is in sight but there is a need to put a floor in the relationship and work on possible areas for cooperation. The Arctic can be one but only if the United States moves to prevent further deterioration and provide “cooling” to a region important to all nations.

Kenneth Yalowitz was U.S. ambassador to Belarus and Georgia and is an adjunct professor at Georgetown University and Global Fellow at the Woodrow Wilson Center.

Ross A Virginia is professor and director, Institute of Arctic Studies, Dartmouth College, Hanover NH and Global Fellow in the Polar Institute at the Woodrow Wilson Center.