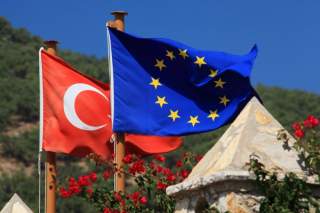 EU-Turkey relations have entered a new crisis mode. This is not surprising, given a series of negative developments that have intensified in the last several years. Interestingly, despite divergent agendas and a general pessimistic outlook, there are also potential areas for cooperation and, in certain cases, an overarching need for Turkey-EU rapprochement, in view of common challenges and mutual interests. Therefore, political leaders’ choices will ultimately decide the future direction of relations.

On the downside, Turkey and EU appear to be two distant objects moving farther apart. First, the Turkish quest for EU integration has collapsed, with both sides diverging on political and security agendas, followed by each prioritizing internal consolidation and hedging against foreign threats. An offshoot of this insular mood has been growing xenophobia and anti-Turkish sentiment among the European electorate, which has further been stirred up by rising populist movements across the EU. As a result, Turkish public opinion has lost its enthusiasm for the EU project, and come to the conclusion that the EU is not a rule-based community that would integrate Turkey, but a political-cultural entity that is interested in settling contemporary and historical scores, usually with Turkey and the Turkish diaspora as a scapegoat. This latter view was epitomized during the Brexit referendum, in a country presenting itself as the leading supporter of Turkey’s EU membership.

Second, the post–Arab Spring crises upended Turkey’s claim to being a cooperative bridge between the Middle East and the EU. On the contrary, it turned Turkey as a potential medium for the vectors of Arab chaos, namely jihadist terror, sectarian strife and human exodus. This association with trouble, and the Western media’s misguided characterization of Turkey as the root cause and backer of jihadist terror, distracted from the key agenda, hindering much-needed consultation and cooperation.

Last but not least, Turkey’s potential status as a rising power let it to take a daring approach, from foreign policy to economics, while the EU has still been entangled in political and economic soul-searching to avert general sclerosis. Turkey sought an active and transformative role in the post-2011 MENA region, and aspired to play a flag-bearing role for democratization and economic openness. This integrative strategy could only work provided that the EU and the United States stood firm behind their founding principles. However, the economic recession and political polarization in the West have turned out to be insurmountable obstacles for supporting popular movements in Turkey’s neighborhood, which eventually became participants in brutal civil wars.

The latest addition to this structural divergence was disappointment among the Turkish establishment, including both the government and the opposition, that the EU had failed to support the democratic regime in Turkey. Turkish politicians have been vocal in expressing their disappointment in their public speeches, turning even high-level press conferences with visiting European counterparts into polemical standoffs or, even worse, making social media into a platform for naming and shaming between political leaders.

The fury and disillusionment are palpable among the elites in Turkey regardless of their political allegiances. Neither secularists nor conservatives feel their agendas are achievable under the banner of Europeanization, which has actually begun to produce its own contagions of discrimination against and fear of non-Europeans, in addition to its track record of Turkey bashing. On the other hand, there is growing resentment in EU capitals against Turkey’s political responses to burgeoning internal threats, above all Kurdish separatism and clandestine Gülenist efforts to paralyze the apparatus of the state.

This attitude reflexively nourishes loss of trust for the EU project as a whole, which not only failed to deliver, but also missed the geostrategic opportunity of aligning Turkey with broader European interests such as working toward stability in their common neighborhood. Turkey’s current EU fatigue may seem unique, especially against the multiplicity of threats the country faces. Yet, the frustration stems from the expectation that Europeanization would, as it has been for the last two centuries, be the solution for the reform process, while it currently looks like an outdated model with a one-size-fits-all formula, but only dubious results, given that they are far from successful even across the West.

Despite the difficulties and their deep-rooted causes, there is also a long history of Turkish cooperation with Europe to ends of domestic policy and reform. Traces of this pattern can be seen in the seventeenth-century Koprulu reforms, against the emerging Westphalian order in Europe, and the post-2004 reforms implemented in compliance with the EU accession. Thus, the state apparatus has pragmatically blended the traditions of the Turkish state with resilience against crises and the ability to internalize reform along European lines.

In this sense, cooperation would pave the way to serving mutual interests, while helping policymakers to pursue attempts at domestic reform. From geostrategic risks such as the spillover Middle Eastern disorder, to the rise of revisionism, from Ukraine to Syria, and even emerging risks in the eastern Mediterranean and Caucasus and Central Asia, Turkey shares a common agenda with Europe in upholding security and stability. There is need for clearing the current mood of frustration from the air, in order to recognize the potential for deepening relations.

To that end, the still unresolved Turkey-EU immigration deal would turn out to be a watershed accord for paving the way for a cooperative framework. The deal, despite negative media coverage and politicking on both sides, is mutually beneficial and in principle meets the short-term expectations of each side, i.e., stemming illegal immigration and opening a cooperative link in Turkey-EU relations. Yet there is still a need to convince the public about readmission, as there is opposition to turning Turkey into Europe’s refugee camp, and visa liberalization, which has turned into a political issue despite EU’s long-time contractual commitments to Turkey. The Turkish government considers Turkish citizens’ visa-free travel to Europe to be highly likely this year, and consequently a major foreign-policy victory on the horizon.

The idea here is not to offer a historical path suggesting an automatic fix for mutual relations. It is to underline a contingency that may work if certain conditions are met on both sides. Turkey-EU cooperation is necessary for dealing with imminent security threats in the surrounding region. It is also in both sides’ interest to keep the prospect of EU integration alive, for reform and institution building in Turkey. Turkey needs to get its own house in order, namely restoring rule of law, democratization and commitments to international norms and standards after the failed July 15 coup.

Turkey’s post-coup resilience and coping with the aftershocks would greatly benefit from an EU vision for the country’s future role. The limits of mutual distance have already been tested. The crisis in the EU, Turkey’s domestic transformation, the regional environment and the global situation dictate the reverse—namely, a realist turn in Turkey-EU relations based on mutual interests. This realist trajectory would also assuage the immediate need for reform at home and foster integration in the long run.

Image: Flags of Turkey and the European Union. PublicDomainPictures/Vera Kratochvil