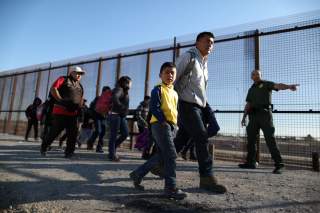 How should the United States respond if a truly large number of asylum seekers presented themselves at the borders? Currently, although there is no crisis caused by asylum seekers, the United States deals very poorly with those who seek asylum. A growing number are forced to stay in Mexico, waiting for a chance to present their case to U.S. judges, at a pace that may require many of them to languish at the border for years. Meanwhile, there is a backlog of eight hundred thousand asylum seekers in the United States itself waiting for immigration judges to rule on their status. The average wait time to complete the asylum process is 180 days, though for many it takes years.

The arduous asylum application process is fraught with uncertainty. Asylum seekers are living in limbo, unsure if they will be able to complete a training course they started, maintain a relationship that they struck, or benefit from an investment they made. They must worry that even a small error in filing paperwork for their complicated application could result in deportation—not to mention any minor violation of the law. Families who apply for joint asylum are often separated for long periods of time as fathers are detained while mothers and children are released to wait for their court date.

Some policymakers seek to deal with the challenge by limiting what makes one qualify for asylum. Few accept anymore that you qualify just because you are coming from a country in which violence is rampant, such as Syria. Others argue that even those who show that they are subjected to domestic violence should not qualify, because this is “normal” in their countries of origin and because it makes the category overly broad resulting in very large number of asylum claims. However, even by strict criteria, there are a very large number of people who can show that they have been subject to threats by gangs, terrorists, and governments—or that some of their family members have been killed or tortured.

A practical solution is one that at first seems morally questionable—to help some of the asylum seekers find shelter in other countries that provide a safe haven.

International law states that countries owe those who seek asylum non-refoulement, meaning protection from forcible return to their country of origin. This basic principle does not explicitly deal with the question of whether the shelter must be in the nation the asylum seeker first applies.

International law though does provide two major ways for involving other countries. The first is transferring asylum seekers to another country before their claim is processed. The second way is resettlement in a safe third country after a credible fear of persecution has been established.

For instance, Australia and the United States have a bilateral agreement to transfer those asylum seekers who were found to have a credible fear of return to their home country from Australia to the United States. Mexico adopted the Mexico Plan of Action in 2004 to take in Latin American refugees—an agreement followed by Argentina, Paraguay and Uruguay that also designates their countries as places of refuge.

Ethically, if a person presents themselves at our door and we believe he/she is in mortal danger, we surely ought to save their life. However, if our home feels crowded to some, or some family members will be dismayed and make the lives of the newcomer miserable, and—the neighbors are willing to take the person seeking shelter in—sending some next door seems reasonable. Yes, we should work to encourage members of our family (or nation) to see the merit of providing a home to more refugees—but meanwhile, all involved will be better off if some of those who seek shelter find it in places they are fully welcome.

For some Central Americans seeking asylum in the United States, Spain might be an especially welcoming destination. Until recently, Spain has been one of few countries that welcomed immigration in general, even from countries with a rather different culture than the native one. More recently there has been some opposition to accepting asylum seekers due, in part, to high unemployment. Nonetheless, Spain is still one of the most immigration friendly nations in the world. Moreover, for a long time, Spain has been actively courting immigrants from Spanish-speaking countries. In the 1980s, Spain welcomed thousands of refugees from South America fleeing military dictatorships. In the early 2000s, Spain adjusted its immigration laws to encourage migration from Latin America, as these migrants are perceived as desirable due to their cultural adaptability and skills sets.

In short, while it seems like a cop-out to not open our home to all who seek asylum, if their numbers are truly large, then it seems reasonable to offer some a new option: instead of waiting for many months for a ruling about their status, offer passage to a country that provides safe haven and whose language (a major factor in successful assimilation) they already command—such as Spain for those fleeing Central America.

Amitai Etzioni is a university professor and professor of international affairs at The George Washington University. His next book, In Defense of Patriotism, will be published by University of Virginia Press this summer.