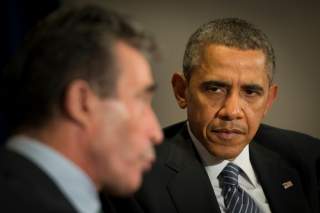 Recent headlines chronicling the breakdown in U.S.-Israeli affairs and the personal loathing between President Obama and Prime Minister Benjamin Netanyahu have overshadowed the continuing ructions in Washington’s relations with its traditional allies in Europe.

Josh Rogin at Bloomberg View has reported that Mr. Obama delivered what can only be regarded as an extraordinary slight to Jens Stoltenberg, who became the head of the North Atlantic Treaty Organization six months ago.  Obama is one of the few Western leaders who has not yet met with Stoltenberg and in fact deliberately passed up an opportunity to see him last week when Stoltenberg was in Washington.  Rogin noted that the NATO chief was finally able to secure a last-minute meeting with Defense Secretary Ashton Carter, but that Stoltenberg requested a meeting with Obama well in advance of the visit but never heard back from the White House.

The upshot is that Obama missed a good opportunity to demonstrate NATO solidarity in the face of Moscow’s on-going depredations against Ukraine.  As Rogin concluded, “the message Russian President Vladimir Putin will take away is that the White House-NATO relationship is rocky, and he will be right.”  Moreover, given that Stoltenberg is a two-time prime minister of Norway, a meeting would have sent a useful message to Scandinavian countries like Sweden and Denmark that are facing increased Russian provocations (here, here and here).

Mr. Obama’s disinterest in America’s European allies is a long-standing story, however.  In September 2009, as part of his “reset” of relations with Moscow, he abruptly shelved plans to deploy ballistic missile defenses in eastern Europe that Poland and the Czech Republic had signed on to at considerable political risk.  As a Washington Post assessment notes, administration officials “failed to give a heads-up to the Poles and the Czechs, making it appear like a diplomatic snub at their expense.”  Characterizing the U.S. consultation process, a senior national security official in Warsaw lamented that “we heard through the media.”

Obama then skipped out on a November 2009 meeting with European Union leaders at the White House, conspicuously assigning the hosting duties to Vice President Joe Biden.   Reports (examples here, here and here) were soon circulating that British Prime Minister Gordon Brown and French President Nicolas Sarkozy – the latter being the most pro-American leader in Paris in decades – felt they were being ignored.

In early 2010, Obama once again missed a summit meeting with EU leaders.  So great was the ensuing uproar that he arranged for a get-together later that year.  But the chosen venue – an otherwise vacant building in Lisbon that reportedly lacked electrical power – did little to reassure his European counterparts.  Observing the noticeable difference in style between Mr. Obama and his predecessor, who was reviled by foreign publics but still took the time to build relationships with leaders abroad, Jackson Diehl at the Washington Post warned a year into the Obama presidency that “coolness has its cost.”

Matters were little better as Obama’s second term unfolded.  In a comment piece in late 2013, Roger Cohen at the New York Times reported that:

.... Germany [is] incensed by what it has perceived as a dismissive U.S. attitude. A senior official close to [German Chancellor Angela] Merkel recently took me through the ‘very painful’ saga of the Obama administration’s response to Syrian use of chemical weapons. It began with Susan Rice, the national security adviser, telling the Chancellery on Aug. 24 that the United States had the intelligence proving President Bashar al-Assad’s use of chemical weapons, that it would have to intervene and that it would be a matter of days. German pleas to wait for a United Nations report and to remember Iraq fell on deaf ears. Six days later, on Friday Aug. 30, Germany heard from France that the military strike on Syria was on and would happen that weekend — only for Obama to change tack the next day and say he would go to Congress.

Things got worse at the G-20 St. Petersburg summit meeting the next week. Again, Germany found the United States curtly dismissive. It wanted Germany’s signature at once on the joint statement on Syria; Germany wanted to wait a day until a joint European Union statement was ready and so declined. ‘The sense from Rice was that we are not interested in your view and not interested in the E.U. view,’ the official said. ‘We left Petersburg very offended. This is not what you want your best partner to look like.’

Foreign Policy’s David Rothkopf subsequently reported that Rice pressed the German team so aggressively at the G-20 summit that she “launched into a profanity-filled lecture that featured a rare diplomatic appearance of the word ‘motherfucker.’ Germany’s national security advisor, Christoph Heusgen, was so angered that he told an American confidante it was the worst meeting of his professional life.”

Similarly, John Vinocur, the former executive editor of the International Herald Tribune, has quoted a senior European security official as saying that Mr. Obama “does not do consultation, and he doesn’t do discussion with allies.  He reports, and he describes his analytical process.”

An October 2013 article in Der Spiegel told the same story.  It stated that “During a recent visit by a European head of government to Washington, the atmosphere was described as frosty by those in the entourage from Europe. Obama didn't find the time for even a little small talk, the sources said, and ‘it seemed to some like an appointment with a lawyer.’”

Speaking a year ago before a European audience, Secretary of State John Kerry reassuringly called for “a transatlantic renaissance” entailing “a new burst of energy and commitment and investment in the three roots of our strength: our economic prosperity, our shared security, and the common values that sustain us.”  This message was decisively undercut less than a week later, however, when a leaked phone conversation featured Victoria Nuland, the Assistant Secretary of State for European Affairs, graphically cursing the EU’s diplomatic efforts in the Ukraine crisis.

President Obama also called for a renewal of Atlantic relationships during his trip to Europe last year, and he has tried to rally common Western positions on the Ukraine conflict, Iran’s nuclear program and the role of a rising China in global economic governance.  But he shouldn’t be surprised that consensus is hard to come by when he has spent so little effort trying to engage with the continent’s leaders.

Beyond the foreign policy consequences of how the president has mismanaged relations with the continent, a surfeit of irony is also at work.  His promise to repair ties that were damaged by the acrimony over the Iraq War guaranteed him euphoric welcomes in Berlin in July 2008 and in Prague the following spring.  Speaking before a massive crowd assembled in Berlin’s “Tiergarten” (speech text here; video here), he grandly vowed to “remake the world once again,” this time in a way that allies would “listen to each other, learn from each other and, most of all, trust each other.”  That pledge is now so yesterday that Mrs. Merkel is reportedly longing for the days of George W. Bush.

David J. Karl is president of the Asia Strategy Initiative, an analysis and advisory firm, and co-founder of Geoskope, a cross-market intelligence company.