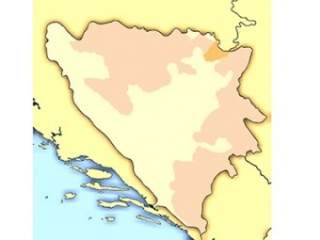 Now that the smoke has cleared from what is being called the worst violence in Bosnia in the past nineteen years, it is worth taking stock of what actually happened, where international policy towards Bosnia has floundered, and what needs to be done down the road to stabilize both the country and the region as a whole.

First, to understand how absurd press coverage of Bosnia’s recent unrest has been, imagine the following news report, adjusted for an American context:

Protesters burned the White House, several state capitol buildings, and parts of the Library of Congress demanding the resignation of government officials at all levels of government and that the states be abolished.

Analysts attribute the violence to the United States’ dysfunctional governmental structure, which is composed of a federal government, fifty states (each with its own governor, legislature, board of education, judicial and police systems), and countless municipalities. The street protesters also claim that politicians who have won office in internationally certified democratic elections are not legitimate.

Fortunately, after the initial naïve euphoria about a “democratic spring,” clearer heads have started to prevail. Several individuals involved in the violence have been charged with terrorism, and Bosnia’s security minister has been forced to resign.

Nevertheless, despite the bad reporting and analysis, Bosnia’s recent unrest should remind people in Washington and Brussels that current policy towards the region is floundering. There are a myriad reasons for this—from outmoded stereotypes of the region’s problems, to rigid and inflexible bureaucratic thinking about how the Balkans should be integrated into the EU, to the fact that the major powers are using the states (or peoples) of southeastern Europe as pawns in higher-level chess games, or that that the Balkans now only get the attention of low-level bureaucrats from Foggy Bottom to Whitehall to the Quai d’Orsay, and, ultimately, the simple reality that at this moment foreign-policy establishments have more pressing world problems to deal with. Nevertheless, the fact that people are ignoring southeastern Europe does not mean that politics and time are standing still there, or that ignoring the problems will make them go away.

In the Bosnian case, what has been lacking for several years is a coherent concept of how to stabilize the country internally and externally. Much as with the Israeli-Palestinian peace process, what the final outcome should look like is relatively clear, but mustering the political determination and courage to get there is lacking. Conceptually, however, the pathway to such an endpoint would look something like this:

1) Bosnia joins NATO. Although this would be a hard sell for the Serbs due to the memory of the NATO bombing campaigns of 1995 and 1999, they should swallow their pride and realize that time has moved on. Proposals to demilitarize Bosnia are understandably unacceptable to the Bosnian Muslims, who would find themselves essentially unarmed between some 8-9 million Serbs and 4-5 million Croats (including those in Croatia and Serbia proper). Most importantly, NATO membership would provide the secure environment needed for the various parties to make the difficult concessions and compromises required of them. An added side-benefit would be that this would ease Serbia’s entry into the alliance as well.

2) Collective autonomy for Bosnian Croats. Conventional wisdom holds that the problem in Bosnia is the Dayton Agreement. This, in fact, has the problem upside down and backwards—Bosnia is not the way it is because of Dayton; rather, Dayton is the way it is because of the divisions and cleavages in Bosnian society. The epicenter of Bosnia’s problems today is the Washington Agreement of 1994, which created a Muslim-Croat federation that does not give the Croats the institutional capacity to defend their interests. This has resulted in a near-constant crisis in the federation for the past six years, while at the same time the Serb entity in Bosnia, the Republika Srpska (RS), has enjoyed considerably greater stability and success in its political and economic reform efforts. It is currently considered heresy to endorse some form of Croat entity in Bosnia; however, until the Croat question in Bosnia is resolved, there is no way the country can move forward.

3) The Office of the High Representative (OHR) is shut down, totally and for good. As far back as 2004, the blue-ribbon International Commission on the Balkans reported that all of their interlocutors were of the belief that the OHR needed to be closed. Ten years on, the OHR limps along, utterly useless but still representing an extremely negative dynamic in Bosnian politics. The EU’s Venice Commission has claimed that Bosnia cannot enter the EU while the OHR continues to impinge upon Bosnia’s sovereignty and threaten its legitimate domestic political processes. Now that almost two decades have passed since the war, it is time to totally shut down Europe’s last neocolonial institution.

4) The EU develops a new accession mechanism for Bosnia. For Eurocrats, creating a modified accession process is unthinkable, yet the deep divisions in Bosnian society make it practically impossible for the country to adopt and implement the 170,000 pages (and growing) of the acquis communautaire that more mono-ethnic states such as Estonia or Hungary were able to carry out (for that matter, it is a fair question whether similarly ethnically-divided states such as Belgium, Cyprus, or Spain would today be able to agree on EU required reforms). A number of regional leaders, such as Croatian foreign minister Vesna Pusic, have started arguing that Brussels needs just such a new approach to Bosnia. The hard question for Brussels is whether a more stable outcome for Europe would be a slowly-reforming Bosnia inside the EU’s guiding mechanisms, or a completely dysfunctional Bosnia on the outside, perpetually falling further and further behind the rest of Europe. This is a problem the EU may well have to confront regarding other states in the region as well.

The trick to such a strategy is that it requires coordinated and synchronized movement on all of these fronts simultaneously. Since all parties concerned have important compromises to make, each has to see that at the same time they are gaining something significant in return.

Of course, given the downturn in relations between western capitals and Moscow, whether it is possible to muster the required political will and energy to develop and implement such a coherent strategy is of course an open question. But what is certain is that ignoring problems in southeastern Europe will not make them go away, and there are still people in the region willing to resort to violence to get their way. As one Bosnian “activist” put it recently, “The war is not over. We are still fighting the same war.” Which reminds one of something Bismarck prophetically said in the late nineteenth century: “If there is ever another war in Europe, it will come out of some damned silly thing in the Balkans.”