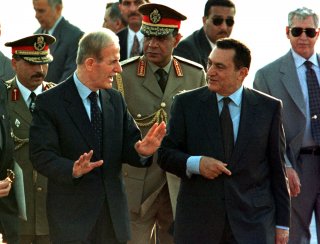 EVER SINCE the nineteenth century, when so-called reforms were initiated in the Ottoman Empire, there have not been wanting western ministers and diplomats to look on middle eastern politics with hope and expectancy. It is quite common knowledge that in the last hundred years the middle east has seen no quiet, that disturbance has succeeded disturbance … It might therefore seem more prudent to assume that the distemper of the modern east is not a passing one, that its political instability is rather the outcome of a deep social … crisis which the schemes of the reformer … can scarcely assuage or mollify. And yet … [t]he prevalent fashion has been to proclaim the latest revolution as the herald of a new day…

It goes on like that for almost four hundred more pages, in which every detail of political turmoil in Egypt, Syria, and Iraq, and every Western failure there since the late Ottoman Empire to the middle-Cold War years, is excruciatingly recounted, almost day by day, with virtually every large-scale cruelty established, with little respite, so that all the violence and turbulence achieves a thick, undeniable reality that no idealism or social science theory can ameliorate; with the only solution to anarchy appearing to be strong, no-nonsense rule: whether by a local dictator or by an imperial power. The writer, Elie Kedourie, who passed away in 1992, published The Chatham House Version and Other Middle-Eastern Studies—perhaps the most challenging, dissident work of area studies in the twentieth century—exactly fifty years ago. Chatham House, or the Royal Institute of International Affairs, and its director of studies for three decades, Arnold Toynbee, become in Kedourie’s book illustrative of an elitist British sentimentality toward the cultures of the Middle East (and to Arab nationalism in particular) that hid from, rather than faced up to, the impure, realist requirements of politics and necessary force.

But Elie Kedourie’s merciless precision as a slayer of cant and formulaic thinking constitutes much more than a switchblade attack on polite, conventional wisdom about the Middle East. Kedourie, who spoke English, French, and Arabic, was an area specialist to compare with the greatest Arabists and foreign correspondents. But unlike most area specialists, he wrote without sympathy for his subjects, and deliberately so, and at the same time intuitively grasped the subtleties and abstractions of intellectual argument which his writing ignited. Kedourie was an intellectual with a deep historical memory. He forgot nothing. He was equipped with the knowledge base of a reporter—that is, he revered facts on the ground going back decades as a way to refute all theory. This combination of skills, as we shall see, gave him the clairvoyance of a Samuel Huntington. Most significantly, he had an old world integrity that is awe-inspiring in this age of rampant credentialism. At twenty-eight, in 1954, he turned down a doctorate from St. Antony’s College, Oxford, because he would not make changes about a Mesopotamian revolt in his thesis to appease one of his examiners, the legendary Orientalist Sir Hamilton Gibb.

Kedourie was a shy, retiring man with backbone. “A short, wintry smile from him was the equivalent of a warm embrace or a slap on the back from many others,” recalls Martin Sieff, former chief news analyst for United Press International. He didn’t socialize with his students at the London School of Economics. In an age of sly operators with media strategies, who appear on television and master the art of soundbites, he communicated almost exclusively through text. Only by reading him at length could one know how he has politely decimated, with a “potent and lucid” style, all manner of “leftist theory” and social science belief about the Middle East, writes Martin Kramer, founding president of the Shalem College in Jerusalem.

Elie Kedourie grew up in a wealthy Jewish family in Baghdad, and as a fifteen-year-old schoolboy witnessed close-up the June 1941 pogrom, known as the Farhud (“Looting”), in which the Iraqi army and police murdered over 180 Jewish men, women, and children, and raped countless Jewish women. The Farhud came after the British Army had put down a local military coup that sought to align Iraq with Nazi Germany. The British, in order to appease the Arab population afterwards, let the Iraqi army and police vent their frustration by going wild for several days. Kedourie, in The Chatham House Version, blames the British authorities for failing to protect the Jews, despite having taken over responsibility for Mesopotamia from the Ottoman Empire in the aftermath of World War I. He writes that the Jews could “cheerfully acknowledge” the “right of conquest,” whether exercised by the Ottomans or by the British, because “their history had taught them that there lay safety.” But the British failure to enforce the law and provide imperial order was the kind of transgression that religious and ethnic minorities could ill afford, he goes on. After all, the multiethnic Ottoman and Habsburg empires, with their deeply rooted cosmopolitanism, had protected minorities much better than the uni-ethnic states and democracies that replaced them. Kedourie thus—in this particular case—argued for more imperialism; not less.

Kedourie’s essential diagnosis of Great Britain’s Arab policy in his lifetime was that the British Foreign Office’s awe of an exotic culture, combined with the “snare” of a misunderstood familiarity towards English-speaking Arabs—who used the same words, but meant very different things when discussing such issues as rule-of-law and constitutions—led to a profound lapse of policy judgment: towards which, one must add guilt regarding the post-World War I border arrangements that allowed for, among other things, a Jewish national home in Palestine. In the minds of this naïve generation of British officials, once Zionism and imperialism could be done away with, the Arabs would enjoy peaceful and stable institutions.

Fifty years ago, Kedourie countered with what in recent decades has since become a commonplace: that neither imperialism nor Zionism were the problems. As he put it, it is only a “fashionable western sentimentality which holds that Great Powers are nasty and small Powers virtuous.” In any case, he continues, even without imperialism and Zionism other outside powers would naturally work to involve themselves in this vast, energy-rich region as part of the normal course of history. The West was a problem, certainly, but in a different way than late British colonial officialdom and some of their American Cold War successor-acolytes had imagined it: Westernization and modernization were only amplifying the coercive, illiberal power of newly independent Arab regimes themselves. Consequently, the nascent Arab middle classes were even more dependent on the goodwill of those vicious new regimes than they had been on the colonial powers. Indeed, everything from import licenses to securing jobs to school admissions required a silent pact with the authorities. And when oil wealth was suddenly added to the sociological fire of a falsely Westernizing Arab world, as Fouad Ajami (echoing V.S. Naipaul) explained: inhabitants of the great cities of the Middle East began experiencing the West only as “things” and not as “process,” importing the “fruits of science” without, as societies, producing them themselves. The results were sophisticated milieus, West Beirut being one for a time, of “Western airs and anti-Western politics.” The Arab youth were especially dangerous, Kedourie unsentimentally observes: full of “passion and presumption,” they possessed the techniques of Europe without intuiting the cultural processes that had made Europe what it was. They hated their fathers’ world, and saw utopia rather than civil society with all of its messy backtracking, compromises, and checks-and-balances; thus, they paved the way for replacing Arab nationalism with Islamic fundamentalism—a phenomenon of a rapidly urbanizing Middle East, where the traditions of the village have been weakened and must be fortified anew in more abstract and ideological form.

THE DESPAIR with which the class of Middle East experts in Washington now view the region is one that Kedourie arrived at long ago, and not cynically. Rather, it came about through painstaking historical research. In The Chatham House Version and a companion volume, Democracy and Arab Political Culture, Kedourie narrates the intricate daily political maneuvering over the course of a century in several Arab regions, exposing a politics unequalled in its unceasing and often violent disorder: a world in which the Ottoman Empire with its caliphate crumbled, leaving an Islamic civilization without a recognized religious authority. The result was various groups and factions and ideologies that competed for which one could be the most pure; that is, the most extreme. Today’s problems are old problems, going back to the decades of Ottoman decline, with the realization that the Middle East, from Algeria to Iraq, has still not found a solution to the final collapse of the Turkish sultanate in 1922.

Constitutionalism was variously and continuously attempted in nineteenth- and twentieth-century Egypt. The de facto British rulers welcomed this, wanting to lessen the burden of daily government on themselves. For decades they tried, but they could rarely make it work. The modernizing Khedive Ismail in 1868 had set up a parliamentary assembly in Cairo. But such stillborn attempts at Westernization ultimately ran up against a blunt fact that still persists, albeit in far more subtle form, almost 150 years later during the Arab Spring of 2011: the vast gap between a peasantry and barely literate downtrodden underclass at the edge of the cities and a Westernized class of enlightened would-be reformers. The mass demonstrations in Tahrir Square against the regime of Hosni Mubarak were “1848” all over again: that year of hope-filled liberal risings in Europe that ultimately failed because the educated classes demanding change were just not quite large enough and not quite secure enough to carry the day.