Remembering the Holocaust in Ukraine 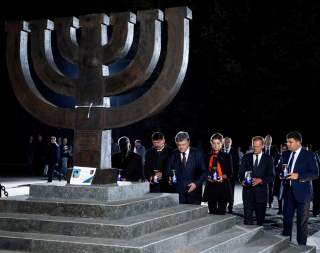 With Holocaust Remembrance Day dawning last Saturday, it’s important to remember that the Nazis could not have implemented the Shoah without widespread assistance from local collaborators. While Western European nations have largely come to grips with the fact that some of their citizens collaborated with the Nazis, some countries in Eastern Europe remain reluctant to fully confront the darker aspects of their nation's World War II history.

One country struggling with this is Ukraine, a nation seeking to create a new national narrative while simultaneously fighting an existential war against a Russian enemy seeking to block Kyiv’s desire to join the West.

It’s been a bumpy ride so far. As part of a series of “decommunization” laws passed in 2015, the country’s complete set of archives from the “Soviet organs of repression” were transferred to Ukrainian Institute of National Memory (UINP), a government entity tasked with the “implementation of state policy in the field of restoration and preservation of national memory of the Ukrainian people.” Central to this has been a campaign by UINP to depict the World War II-era nationalist groups, the Organization of Ukrainian Nationalists (OUN) and the Ukrainian Insurgent Army (UPA), as multi-ethnic and democratic organizations while whitewashing their involvement in the Holocaust and mass ethnic cleansing of Poles during World War II.

As Ukraine recently prepared to mark the seventy-fifth anniversary of the creation of the UPA’s founding, President Petro Poroshenko became directly involved in UINP’s mission. In a directive sent to regional governments, Poroshenko's office instructed officials on how to “provide citizens with objective information” on the UPA’s history. Attached to the instructions circulated by Poroshenko’s Office was a historical addendum prepared by UINP:

There is evidence that Jews fought in the UPA. They considered their stay in this army as real salvation from physical extermination by the Nazis. That's why so many Jews moved there after escaping from the ghetto, others were released from there by Ukrainian insurgents.

They positively proved themselves not only as ordinary soldiers, but also as qualified doctors. The volumes “Chronicles of the UPA” contain information about the heroics of Jews who fought in the ranks of the UPA both against Nazism and against communism, and many of them died in the fight for the will of Ukraine and the honor of the Jewish people.

UINP’s addendum represents the exact opposite of the truth. Many UPA cadres came from the ranks of the Ukrainian Auxiliary Police—an organization deeply complicit in collaborating with the Nazis to implement the Final Solution in Ukraine. Perhaps not surprisingly then, while focusing its killing machine largely against Polish civilians, the UPA also frequently hunted down the few surviving Jews still alive in western Ukraine in 1943–1944.

In sum, the office of Ukraine's head of state is peddling Holocaust revisionism—something we should all be disturbed by. To be clear, there's no evidence that Poroshenko supports UINP’s views or holds any anti-Semitic beliefs himself—indeed his Prime Minister and many of his acquaintances are Jewish—but by outsourcing the “management” of Ukraine's memory to UINP he must be considered at least indirectly responsible for helping whitewash his nation's complicated Holocaust history.

Kyiv's state-sponsored memory campaign represents a betrayal of the democratic ideals Euromaidan's brave protesters fought for. While demonstrators did include a sprinkling of far right ultranationalist organizations, the overwhelming numbers of protesters were driven by their desire for Ukraine to become a fully European state. Moreover—unlike in many other European countries—far-right parties like Svoboda draw little electoral support and there’s no evidence Ukraine’s citizens possess widespread anti-Semitic attitudes.

Even aside from the ethical problems intrinsic to Holocaust obfuscation, UINP’s memory politics also negatively impact Ukraine's in its ongoing information war with Russia. Russian trolls and state-owned media such as RT and Sputnik love falsely depicting post-revolutionary Ukraine as overrun by anti-Semitic fascists and Nazi sympathizers. For the Kremlin’s propaganda apparatus, UINP is a gift that keeps on giving.

Finally, given the increasing Western academic consensus on the crimes committed by some OUN-UPA members, Ukrainian officials risk waking up one day to discover that their country's memory politics have been officially condemned in the United States or Europe. As Andreas Umland argues “in Ukraine, only a few political and intellectual leaders seem to comprehend how important the memory of the Holocaust has become to the formation of post-war Western intellectual and political discourse…. the more details of certain OUN members’ involvement in the Holocaust will become known to Western public—such as the crimes committed in the summer of 1941—the more scandalous the Ukrainian state’s current glorification of the OUN and its leaders will become.” Ukraine already faced this situation once in 2010 when the European Parliament denounced former Ukrainian President Victor Yushchenko's decision to label OUN leader Stepan Bandera a “Hero of Ukraine,” and at a time of war the last thing Kyiv needs is a public condemnation from the West for Holocaust revisionism.

To be clear, there’s nothing inherently wrong with decommunization per se. Communism was horrible in its own right and Ukraine possesses every reason to shed its Soviet past and construct a new national identity. At the same time though, joining the EU and becoming a fully accepted member of the Western family of nations will ultimately require that Ukraine confront and acknowledge the darker aspects of its past.

There are many steps Ukraine can take to achieve this. First is by establishing a historical commission composed of both Western and Ukrainian historians’ charged with determining the true history of the Holocaust in Ukraine. For this commission to succeed, however, it’s critical it works under the auspices of a respected institution such the Holocaust Museum or Yad Vashem rather than UINP. The UINP and their ultranationalist enablers would almost certainly reject a Commission structured in this manner and it will take real courage for Poroshenko to override these objections - but it’s the type of risk transformative leaders take.

Ukraine could also implement a long-mooted plan to finally create a fitting memorial at Babi Yar, a Kiev ravine where over 33,000 Jews were slaughtered after the Nazi conquest of Kiev in September, 1941. The Holocaust Memorial Center Babi Yar Foundation (HMCBY)—supported by Kiev's mayor Vitaliy Klitchko and numerous other Ukrainian and international public figures—is set to be completed in 2021, the 80th anniversary of the massacre. It important that Ukraine's Government—from Poroshenko on down—to provide public and visible support to this project and overcome the inevitable delays and objections. Ukrainians deserve a world class memorial that will make the entire country proud.

Third, Ukraine could join the International Holocaust Remembrance Alliance (IHRA)—something it has not done to date. Although Ukraine possesses a relationship with IHRA, according to one source close to the organization “there have been no official attempts by the Ukrainian government to work more closely with IHRA.” As Ukraine looks more closely at its Holocaust history joining IHRA would be a natural step to take.

Fourth, it’s important that Ukraine implement a national policy to preserve and protect its Holocaust monuments and cemeteries. Kyiv's record here is mixed. Two Jewish cemeteries in Lviv which contain the remains of Holocaust victims may be plowed under so a hotel can be built on the site, and numerous other Jewish cemeteries face the same risk. Vandalism crimes at Ukraine's various Holocaust memorial locations also remains a problem.

Kyiv’s Ministry of Education should also ensure its school curriculum openly acknowledges some Ukrainians’ collaboration with the Nazis. It’s understandable that some Ukrainians’ consider the OUN-UPA heroes because of their resistance to the Soviets and fight for Ukrainian statehood, but it would be unfortunate for Ukrainian children to grow-up with a one-sided narrative that ignores the crimes these organizations committed.

Finally, Ukrainian politicians could stop honoring leaders’ whose forces killed Jews with an endless procession of posthumous honors such as street naming, awards and statues. When it comes to the Holocaust the real heroes are the over 2,500 Ukrainian “Righteous Among the Nations” who risked their lives to save Jews rather than killing them. Recently deceased Jewish Red Army veteran Arkady Vaispapir—a leader of the famed Sobibor concentration camp revolt who killed the SS camp commander during his escape—represents another example of heroism. Renaming streets after these brave men and women would help Ukrainians’ understand that—as in every other country occupied by the Nazis—the Holocaust produced both collaborators and heroes.

By standing on the front lines against Russian aggression Ukraine has demonstrated its commitment to join Europe. A historically accurate reckoning with the Holocaust will help it get there.

Josh Cohen contributes to a number of media outlets including Foreign Policy, Reuters, Washington Post and others.