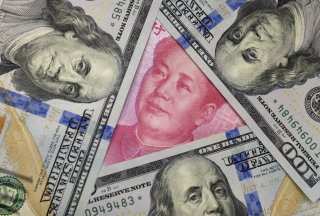 One of the top domestic challenges facing the Biden administration is the rising inflation. The inflation rate in the United States has been well below 2 percent for most of the past decade, even during the pandemic year 2020. The administration is considering removing the tariffs on Chinese goods to help lower inflation.

The tariffs certainly contribute to inflation, yet according to the PIIE estimate, the inflation would fall by only 1.3 percentage points one-time if the United States ended all trade war tariffs. This hardly helps; the 8.3 percent inflation rate (as of April 2022) is primarily driven by a 9.4 percent yearly increase in food prices and a 30 percent increase in energy prices, not by Chinese imports, even when Chinese supply chains are being disrupted by the endless zero-Covid policy. The EU, without tariffs, experiences 7.5 percent inflation. While the administration is trying to find solutions, however, the question remains: should the tariffs stay? This analysis attempts to provide a holistic perspective, reflecting current global trends.

This is true as anyone who has taken macroeconomics 101 knows. Assuming perfect competition and no distortion, free trade is Pareto-optimal. Economic efficiency can be achieved by utilizing comparative advantage, economies of scale, and cheap intermediates. Consumers, of course, benefit from low prices and a wide variety of products. When tariffs are levied, scarce resources are diverted to inefficient sectors. Three groups are particularly impacted: consumers, producers importing intermediates, and multinational corporations utilizing global supply chains.

To be sure, the research led by a team of economists shows that China’s accession to the World Trade Organization has brought severe shocks to the U.S. industries, labor, and families, and these effects are not easy to adjust to. Instead, they are likely temporary, at least at a slower pace, as China gradually advances up the value chains. It is also noteworthy that globalization with free trade has contributed to political polarization and disproportionately benefited a small number of entities, especially multinationals, resulting in redistributive problems.

Why the Trump Administration Imposed Tariffs

Often, the assumptions of free trade are violated: governments may adopt certain trade and industrial policies to benefit national interests at the expense of labor and human rights, environmental protection, and a level playing field for everyone. China is no exception: with China turning into the world’s largest economy and running a $400 billion yearly trade surplus against the United States, it is hard to ignore.

Tariffs seemed to serve multiple purposes. Due to his Mercantilism mentality, President Donald Trump implemented protectionist tariffs, also as a punitive measure, in the sense that tariffs partially block market access. Trump wanted to protect certain industries and workers (the “China shock“ paper was cited in his campaign file). Wary of the geopolitical threat, he also held a zero-sum view that involves relative gains and wishes to decouple from China, as evidenced by the notorious “hereby order business to leave China“ tweet. Several of his cabinet members shared this opinion (including former Secretary of State Mike Pompeo; Director for Trade and Manufacturing Policy Peter Navarro, and perhaps U.S. Trade Representative Robert Lighthizer). On the one hand, the Trump administration was calling for a full-blown trade war with China, but they were actively negotiating bilateral deals on the other, albeit with sectoral disputes like steel and aluminum.

Tariffs: Did They Work?

The U.S.-China trade war started in July 2018 and ended in February 2020, with the average U.S. tariffs on Chinese goods rising from 7 percent to 19 percent, covering over $300 billion worth of goods. Tariffs had an immediate impact. As reported in the Census database, imports from China in 2018 reached $538 billion, a historically high amount, and the trade deficit hit $420 billion, while the United States only exported $110 billion to China. In 2019, however, imports and the deficit fell sharply to $450 billion and $344 billion, respectively. Tariffs seemed to work at least as a means of reducing dependence (see the below graphic). Interestingly, when it comes to domestic impacts, inflation had been relatively low as of early 2021, while economic growth had been robust. 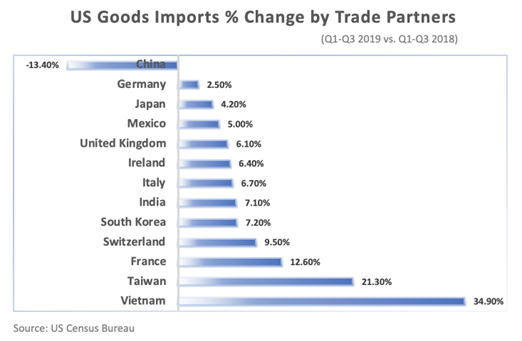 As for businesses leaving China, the results were mixed. Multinationals from Apple to Nintendo to Dell were reported in 2019 to move at least part of their production lines out of China. Nevertheless, one recent study shows tariffs failed to decouple the two economies. An appropriate interpretation is that two years were too short. Firms’ plans are usually longer-term and lagged because of complexity and accumulated sunk costs, and this was aggravated by the ongoing global pandemic.

The Russian invasion of Ukraine in the spring of 2022 reminds us that economic dependence on unfriendly regimes can be problematic. Security risks may far outweigh economic benefits, as Russia’s military destruction and energy supply cutoff illustrate. Political scientists, international security experts, and strategic thinkers often look beyond economics. Already in 1945, Albert O. Hirschman, in his book National Power and the Structure of Foreign Trade illustrates two aspects of trade: affluence and risk. Not only does trade provide more goods, but it can also be used to exert influence, such as economic coercion, or even as weapons, such as supply disruptions.

The solution, then, involves trading with friendly states and controlling trade routes. The British Empire controlled most of the major trade routes. Western nations barely traded with the Soviet bloc during the Cold War. As we realize the risk of reliance on Russian energy, the United States should seriously consider its nearly $600 billion imports from China, many of which are daily essentials and can be disrupted, if China’s interests are threatened (such as the South and East China Seas and Taiwan), or even due to domestic turmoil (like the zero-Covid policy). The United States is already bothered about the possible impact on inflation, let alone an outright cutoff.

Free Trade Is Not Optimal

Politicians sometimes do not share the same opinions as economists. Studies have found that free trade is actually suboptimal in an “anarchic world” because of negative security externalities. Wealth gained from trade can translate to military power and other influences of adversaries. Supply chains controlled by adversaries are more susceptible to disruption. Therefore, encouraging trade to move to allies and friends will enhance welfare by internalizing security risks and easing deal enforcement. China’s trade surplus of nearly $400 billion and its growing industrial capabilities are strengthening its military power. The supply chains that produce daily products for the United States and allies are increasingly concentrated in China, thanks to free trade and globalized production. The current impulse to deepen dependence on Chinese goods for lower inflation is more of a warning than a solution.

According to conventional wisdom, economic interdependence reduces conflicts because it improves communications and restrains future aggression. Some thus warn against escalating tensions to prevent the disruption of interdependence between the two countries. However, research suggests that interdependence may not necessarily deter war, and can sometimes result in conflicts. In the face of perceived threats, states may worry about relative gains and security externality. Conflict is more likely to occur if there is asymmetric interdependence (measured by trade to GDP ratio or trade imbalance). When states expect the future trade relationship to be negative (for instance, fear of being cut off), the downsides of trade become more salient, and states are more likely to engage in conflicts.

Unlike U.S.-EU or U.S.-Canada economic ties, the U.S.-China interdependence is characterized as China’s dependence on the U.S. market while the United States depends on the Chinese suppliers, as bilateral trade data shows. An unusual incident, such as a war across the Taiwan Strait, may make the West reluctant to intervene, if China, as did Russia for energy, threatens to cut off supplies. Because both sides expect the future to be more competitive in a negative sense, more conflicts may be inevitable. Obviously, reducing dependence on China will lose the restraint effect, yet China is actively pursuing self-sufficiency, which was accelerated by the crackdown on Huawei, the trade war, and the witness of Russia being sanctioned. China as an authoritarian regime may retaliate at the expense of citizens’ welfare, whereas the West reluctantly can. Tariffs play a vital role in reducing the dependence on China before times become difficult.

Meanwhile, the traditional trade model based on comparative advantage has limitations. Governments can use strategic trade policy to exploit market imperfections to develop competitive advantages. As of now, China has not demonstrated respect for the spirit of free trade, such as division of labor and equal entry. It is obsessed with export-led prosperity and domination in supply chains to the largest extent.

Clearly, China offers quality products at reasonable prices, and tariffs harm economic efficiency. However, faced with unfair competition by a “whole nation” strategy, U.S. firms find it difficult to compete even in areas such as telecommunications, semiconductors, robotics, drones, and new energy vehicles. Economic efficiency cannot be achieved if many industries that otherwise thrive in fair competition stagnate or disappear. The resulting domestic slack contributes to socio-economic problems such as populism and polarization. Since China is able to freely access the U.S. market under the WTO, tariffs may serve to protect U.S. firms and workers from unfair competition at least domestically, a central tenet of Biden’s trade policy. On the global stage, it requires the United States and its allies to act in concert, something Trump did not do. Other countries also suffer.