Repealing the Jones Act Would Pit Trump against Economic Nationalists 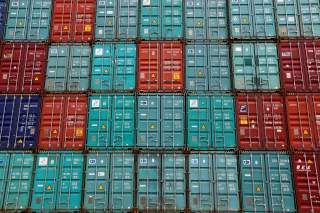 Amid the hurricane devastation in Puerto Rico, Sen. John McCain is renewing his call to scrap the Jones Act, a Progressive era act of protectionism designed to bolster U.S. shipping interests that arose out of national security concerns. In 1920, only two years after the end of World War I, German submarines remained fresh in lawmakers’ minds. Today, however, critics are complaining that the law is exacerbating the plight of Puerto Rico by slowing the delivery of relief supplies, not to mention increasing their cost. President Trump temporarily lifted the law Thursday morning.

But for former White House chief strategist and Breitbart chief Steve Bannon a permanent repeal would not sit well. When I asked Bannon on Thursday if the act is an example of economic nationalism, he delivered an emphatic answer: “Big league.”

Economic nationalism is an, as-yet, loosely-defined set of sentiments and policy inclinations that helped propel Trump to power. The Jones Act is near and dear to the shipping industry, and it is clearly close to Bannon’s heart. “I'm the guy pushing a trillion-dollar infrastructure plan,” Bannon told The Hollywood Reporter, in a different time, shortly after Trump’s victory last November. “Shipyards, ironworks, get them all jacked up. We're just going to throw it up against the wall and see if it sticks. It will be as exciting as the 1930s, greater than the Reagan revolution—conservatives, plus populists, in an economic nationalist movement.”

“As exciting as the 1930s” is not the kind of phrase you routinely hear from Republicans, but these are no ordinary times. And the Los Angeles Times in 1920, when the Jones Act was still making its way through Congress, reported it as an “America First” piece of legislation.

But the establishment consensus is that the obscure law is something of a relic. McCain was joined by Sen. Mike Lee, a libertarian favorite, Thursday afternoon with the two introducing a measure that would permanently exempt at least Puerto Rico.

Said McCain Thursday: “While I welcome the Trump administration's Jones Act waiver for Puerto Rico, this short-term, ten-day exemption is insufficient to help the people of Puerto Rico recover and rebuild from Hurricane Maria. . . . For years, I have fought to fully repeal the Jones Act, which has long outlived its purpose to the benefit of special interests. It's time for Congress to take action, end this injustice, and help our fellow citizens in this time of need.”

“I'm with McCain,” labor economist Clyde Prestowitz, president of the Economic Strategy Institute, tells me. “The act is costly to Americans dependent on shipping and has not stimulated development of a healthy American commercial fleet.” John Despres, an assistant secretary of commerce in the Clinton administration, says this is exactly the kind of thing Trump should be battling against. “The Jones Act,” he tells The National Interest, “is an alligator lurking in the shallow waters of the DC swamp. It’s a symbol of how vested interests can game the political system for their own benefit.”

Others argue that it is superannuated. “The Jones Act long ago outlived its usefulness and should have been overturned or significantly weakened years ago,” adds Eric Farnsworth, Washington director of the Council of the Americas. “It is a vestige of a bygone era. Ironically designed to help U.S. shipping at the expense of the consumer, it is now harming U.S. citizens engulfed in a humanitarian crisis.”

But its defenders don’t mince words. “In 1789, the first Congress of the United States restricted registration for coastal trades and fisheries to U.S.-built and U.S.-owned vessels and gave these vessels preferential treatment with respect to tonnage taxes and cargo import duties,” the Transportation Institute notes on its website, highlighting the long history of such an arrangement between this industry and the government. Trump himself alluded to the pressure on Wednesday. "A lot of people that work in the shipping industry . . . don't want the Jones Act lifted," Trump told reporters. "We have a lot of ships out there right now."

National security is also invoked by the industry. And foes of repeal maintain that they’re being singled out—trucking companies and airlines are afforded similar economic protections, the sector’s representatives argue. “You don’t have Air Yemen flying Chicago-to-Cleveland routes on an Iraqi-flagged aircraft with standards from Yemen and pilots that are Russian,” Fair Kim, legal counsel for the American Maritime Congress, told The Intercept on Thursday.

So far, the Jones Act has survived all attempts to bury it at sea.