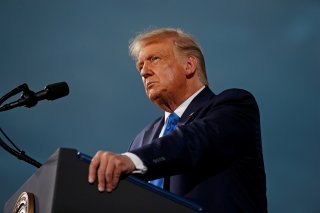 Forty-five Republican senators sent a strong signal Tuesday when they sided with Sen. Rand Paul’s (R-Ky.) efforts in deeming Donald Trump’s upcoming impeachment trial unconstitutional, the latest indicator of the former president’s clinching grip over the party, despite reports of lawmakers distancing themselves from the previous administration after the deadly U.S. Capitol riots.

The move, which ended in a Senate vote of 55-45 as only five GOP senators rejected Paul’s initiative, will likely hand Trump a second acquittal and offer insight into a major Republican reversal since several party leaders who once pinned the blame on Trump for his incitement of insurrection on the Capitol are now backpedaling on their stances.

Following the Jan. 6 mob violence, ten House Republicans sided with all 222 Democrats in voting to impeach Trump. Other Republicans publicly condemned the former president’s leadership amid the unrest on the Capitol, suggesting he took responsibility for his supporters’ dangerous behavior that left congressional lawmakers and their staff hiding under desks and in undisclosed areas to maintain safety.

But local and state-level Republican operatives are now slamming members of the GOP who have decided to break with Trump and his allies in voting to impeach him, with some even calling for their resignation.

That’s likely why Senate Minority Leader Mitch McConnell (R-Ky.)—who previously said that Trump “provoked” the violence that cannoned the Capitol—voted to support Paul’s claims of the impeachment being unconstitutional. McConnell faced state-level political friction as Kentucky’s Nelson County Republican Party recently voted to censure him for what the chair called “impugning the president’s honor” in the discourse relating to the certification of the election results, according to Politico. The Kentuckian also came across a potential resolution that would push him to reject Trump’s impeachment, but it was later ripped up.

House Minority Leader Kevin McCarthy (R-Calif.) also appears to see Trump’s pinnacle of power over the GOP, as he backtracked on the former president’s role in causing the Capitol assault. In the wake of the riots, McCarthy said that Trump harbored some responsibility for the mayhem, but then later noted, “everybody across this country has some responsibility.” The California Republican is reportedly expected to meet with Trump in Florida this week, which is McCarthy’s latest effort to mend the brutal tensions between the House GOP caucus and Trump’s following.

If the Republican Party was ever uncertain over how to navigate in a post-Trump era, then it’s clear that GOP leaders have decided to spackle any cracks in their relationship with the president, underlining his political weight over the party.

“Republicans in Congress are still calibrating the potential blowback for criticizing Trump. I think many dislike the constraints imposed on them by Trumpian populism. They may even believe Trump committed impeachable offenses. But they face a fiery Trumpian base in their next primary,” Raymond La Raja, a political science professor at the University of Massachusetts Amherst, said. “You are seeing them retreat to the Trump fold after hearing loudly and aggressively from Trump’s base in their home states.”

It seemed as if Trump lost his grasp over the party once he was defeated in the presidential election, as the weeks after he proceeded to pitch baseless claims of voter fraud to Americans, pleading that the results of the election were “stolen”—a notion that prompted the historic Capitol attacks that he didn’t assume responsibility for. Reports suggested that Trump’s umbrella of authority had diminished, with members of the GOP fleeing from his name and polls showing a growing decline in favor of the former president. More recent polls, however, reveal climbing positivity for Trump, as 50 percent of Republican voters polled in a Morning Consult survey said the former president should play a “major role” in the party, a nine-point jump from an earlier poll.

Another Morning Consult survey showed an uptick in Trump’s overall approval ratings among Republican voters—which landed at 79 percent, a three-point increase from a poll taken earlier in the month.

While Trump’s popularity is apparent in several counties across the United States with Republicans on the Hill working to close gaps with the former president, experts suggest that he does not have a complete hold over the entire GOP.

“The events surrounding the riot and invasion of the Capitol have had a real effect on the now-past president's standing. He remains quite important—make that crucially important—in the Republican Party. He holds a substantial amount of the support in the public that he did before the election and the aftermath. It is also considerably smaller than it was. That puts him in the unusual position that he appears able to continue to command great support in the party in the public—suggesting he can shape primary electorates greatly in his image,” John Aldrich, a Pfizer-Pratt professor of political science at Duke University, said. “But he has lost just enough of that fervent support to make it hard to see how he could win the general election, particularly for himself for president.”

Aldrich added that his “best guess” is that Trump has lost control over the “most moderate part of the electorate. And, he has, again at least as of now, lost a noticeable chunk of his support among the business community. These reduce but do not eliminate his strength over the party as a whole.”

La Raja also noted that the former president grips power over “the most extreme conservatives of the party,” including populists and evangelicals.

“It's not about Trump. It's about the Trump voter. And the Trump voter still likes Trump, still thinks he won, still is very suspicious of the political establishment, and still is not satisfied with the status quo. The Trump voter is still the majority in most Congressional districts and in most states,” John Feehery, a Republican strategist and columnist at The Hill, said.

Being a part of the far-Right, however, comes with some strings attached—or what conservatives labeled as the “progressive purge.” Republican lawmakers who objected to the certification of the 2020 electoral vote will suffer from complete digital isolation, as dozens of U.S. companies announced that they would terminate donations to anti-certifies. And many pro-Trump Twitter accounts have either seen a drastic decrease in followers or have been kicked off the platform, in a virtual “blacklist” effort to punish party members for their role in potentially inciting the violence on the Capitol.

The future of the GOP in a post-Trump era is still unclear, but experts suggest that traditional Republicans and Trump-associated lawmakers will likely rise to power next year.

“The Republican Party will morph into a working-class party, and as the Democrats overreach, which they are already doing, the Republicans will unify,” Feehery said. “Republicans who stand up for freedom and stand against the political establishment will continue to do well in Republican primaries.”

“In the short term, we will see a flux of Trump-like lawmakers getting elected.  And very likely in 2022. But I think the GOP is heading into a cul de sac if it continues to torch establishment Republicans. Many Trumpians will beat old school conservatives in Republican-dominated districts, but the party will lose elections in swing districts if Trumpians win primaries in those places,” La Raja said.

And in terms of a GOP presidential candidate in 2024, Trump still clutches a steel hold over the party, so there are no front-runner contenders that could wrench through the former president and the rest of the party.

“At least as of right now, there is no one in the Republican Party to challenge his standing as the most powerful Republican, and it is not easy to see how someone could emerge until late in the primary season of 2024,” Aldrich said.

But Aldrich did note that if President Joe Biden is successful over the next four years in his leadership to tackle the pandemic, stroke the strained economy and preserve unity, “that might well signal to Republicans that Trump and Trump-ism is no longer electorally viable.”