Republicans and Democrats Are Overhyping the Nunes Memo 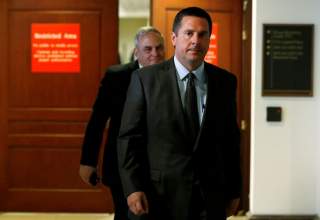 The real question about the now-declassified Nunes memo is this: Why did the Democrats make such a fuss about it? They would have been wiser to avoid a battle over its release rather than acting as though it constitutes some kind of devastating betrayal of American intelligence agencies. Apart from the fact that the intelligence agencies—like much of the government—engage in rampant and unnecessary classification of the obvious, the document is dreary stuff and does not appear to compromise any real intelligence sources and methods. In other words, the document, which is all about Carter Page, is no page-turner. That it became such a cause celebre says more about the febrile atmosphere in Washington than about the document itself.

The document centers on alleged Foreign Intelligence Surveillance Act abuses and Department of Justice. It suggests that Page, an assiduous self-promoter whose actual status in the Trump campaign is as murky as his dealings in Russia (did this Trump adviser really provide any advice to what was, by any measure, a harum-scarum campaign?), was the victim of nothing less than a coordinated conspiracy. It focuses much attention on the role of Christopher, whose salacious dossier has become the bete noire of Trump defenders. The document states that “in the case of Carter Page, the government had at least four independent opportunities before the FISC to accurately provide an accounting of the relevant facts. However, our findings indicate that… material and relevant information was omitted.”

I’ll forgive the grammatically inaccurate split infinitive. But did the intelligence community really rely on the Steele dossier to the extent that the memo alleges and is Steele’s apparent antipathy toward Trump a cogent reason to dismiss his dossier? In the first instance, Page was under surveillance for his contacts with Russian SVR agents long before the notorious dossier saw the light of day. In the second instance, the issue of Steele’s bias, the fact is that the FBI talks to a variety of sources—ranging from mobsters to priests to collect information. It was under no obligation to subject Steele’s political belief, such as they are, to forensic examination. Finally, even if you assume that the memo is 100 percent ironclad, the memo is narrowly focused and does not address the broader investigation of Trump. To the consternation of Trump backers, Rep. Trey Gowdy (R-SC) observed on Twitter today, “As I have said repeatedly, I also remain 100 percent confident in Special Counsel Robert Mueller. The contents of this memo do not — in any way — discredit his investigation.”

If Democrats hyped the document, so has the White House. President Trump has been firing off Twitter fusillades against the Justice Department and FBI. With characteristic overstatement, he said that “it’s a disgrace what’s happening in our country.” But he is only focusing more attention on the Russia probe. Trump would be better off focusing attention on the economy: he should have held a ceremony at the White House today celebrating wage growth of 2.9 percent this past January, a potent sign that the economy is on the upswing. The Atlantic got it right the other day when it declared that Special Counsel Robert Mueller will never indict Trump:

Mueller will not indict Trump for obstruction of justice or for any other crime. Period. Full stop. End of story. Speculations to the contrary are just fantasy. He won’t do it for the good and sufficient reason that the Department of Justice has a long-standing legal opinion that sitting presidents may not be indicted.

Mueller may well issue a scathing report about the Trump campaign. He may indict more leading Trump campaign figures, including Jared Kushner. But Trump’s ability to impede Mueller’s investigation is limited. If he were to go all-out and fire deputy attorney general Rod Rosenstein and risk the resignation of other Justice Department and FBI officials, he would simply raise further questions about why he is so desperate to impede the Muller investigation.

The real winner of this kerfuffle isn’t Trump or the Democrats. It’s none other than Carter Page. He declared today, “The brave and assiduous oversight by Congressional leaders in discovering this unprecedented abuse of process represents a giant, historic leap in the repair of America’s democracy. Now that a few of the misdeeds against the Trump Movement have been partially revealed, I look forward to updating my pending legal action in opposition to DOJ this weekend in preparation for Monday’s next small step on the long, potholed road toward helping to restore law and order in our great country.” Page will get the opportunity to bloviate about how he was persecuted by the Deep State. Meanwhile, as a former senior Justice Department official observed to me yesterday, the standoff between Democrats and Republicans resembles the interminable trench warfare of World War I. “This is 1916, the Somme,” the former official said. Rather than striking a decisive blow, the Nunes memo indicates that the battle over the Trump probe is far from over.