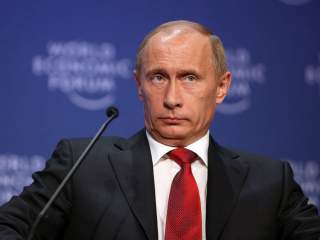 In recent weeks, I have had the honor to attend different daylong seminars convened to ponder Russia's future under Vladimir Putin and the future of U.S.-Russia relations: a "Russia Experts Meeting" hosted by the Carnegie Corporation of New York, bringing together some of America's leading specialists in the Russia field, and a "Russia Futures" project, which assembled members of the Naval War College's faculty who study various different aspects of Russia, Europe and Eurasia policy.

I have left these events with a growing sense of pessimism. Russia policy seems stuck in a bad policy version of the movie Groundhog Day. Eight years ago, I advised, "What is needed is a dispassionate approach to Russia, wherein Americans would neither magnify nor excuse the virtues and vices of the Russian Federation. . . . If we are willing to. . . part with our illusions, we can move forward. If not, then U.S.-Russia relations will continue to deteriorate, and proposals for cooperation will languish." Three years ago, even before the events in Ukraine had occurred, I had offered a bleak assessment of where things were going, that no substantive partnership was possible between the United States and Russia: "I think there is still an illusion, particularly in parts of the Kremlin, that you could achieve a level of partnership with the United States by which you could then get a free pass from the U.S. on various aspects of Russian domestic and foreign policy." But Russia would be unable to offer that, "in part because Russia’s own domestic and foreign policy interests preclude it from being able to offer such a partnership to the United States in the first place. And on the other hand, the cooperation that Russia could offer the United States, while it is valuable to the U.S., is not worth so much to the United States. . . that you would have a willingness on the part of the United States to give that degree of a free pass.”

Yet we continue to circle around the same set of questions: does Russia matter to core U.S. interests? If so, is it easier to find accommodation with Moscow to achieve those ends? If not, should the United States be willing to pay the costs of foregoing whatever Russian help might be forthcoming in favor of using increased military, political and economic pressure for pushing for changes in Moscow's internal and external behavior? As such, a prediction I made at the Carnegie Endowment for International Peace in November 2012 is coming true: that the unresolved nature of the U.S.-Russia relationship will require yet another U.S. president to search for some sort of reset after 2016.

In a nutshell, this is where we are today. During the third presidential term of Vladimir Putin, it has become abundantly clear that the United States is unwilling to accede to Russian demands for recognition of its sovereign democracy at home, a partial revision of the post–Cold War settlement in the post-Soviet space in Eurasia and changes in the international system of governance that would give more weight to Russian preferences. Several of the pragmatic issues which forced a degree of cooperation between Moscow and Washington—finding a nonmilitary, negotiated solution to the Iran nuclear question, and cooperation in Afghanistan—are no longer on the table. In some of the other areas, Washington appears willing to take the risk of foregoing Russian cooperation, as Moscow's absence from the Nuclear Security Summit this week demonstrates. In turn, having failed to gain American and European acquiescence to its demands, the Kremlin has moved ahead with unilateral action, most notably in Ukraine, to push for revisions—and shown a willingness to absorb a degree of Western sanctions.

To the extent that Russia is seeking to revise, especially by force, a post–Cold War order that has favored Western interests, one would expect the United States, if it believes those senior officials who identify Russian behavior as the single greatest threat to the peace and well-being of the United States and the entire Euro-Atlantic community, to pursue one of two courses of action. The United States must either find compromises with Russia over the issues of contention in order to restore more intensive areas of cooperation in other matters, starting with nuclear proliferation and counterterrorism; or else take more vigorous action to develop and sustain a coalition effort to contain and hold back Russia's revisionism.

Option one is not politically palatable. Nothing that seems to resemble “appeasement” has any chance of gaining traction in the United States. To the extent that a greater willingness to compromise with Moscow may characterize the approach of several leading European governments, however, the second option becomes more problematic. There is also the reality that the second option would require the United States to divert resources from other priorities, starting with the Asia-Pacific rebalance. The European Reassurance Initiative represents a partial pivot back to the European theater, but the overall trend lines are still pointing to long-term American disengagement from Europe, coupled with a continued reluctance of European states, with a few exceptions, to commit to shouldering a greater share of the burden of transatlantic security.

So where does this leave policy? For starters, it requires investing a great deal of faith in the proposition that Russia is nearing economic collapse, and that the Russian Federation cannot sustain its efforts at revisionism. Certainly, the economic forecasts are not good for Russia, and Moscow may indeed face intolerable strains in the coming months and years. But like Leon Trotsky's first gamble at Brest-Litovsk in 1918—that the Soviet state neither needed to conclude peace with the Central Powers on onerous terms nor return to an active state of war, but wait for the two Kaisers to collapse—it is predicated on an assumption that economic pain will strike Russia sooner rather than later. But if Russia continues to muddle through, which is also a distinct possibility, then waiting for the Russian clock to run out is not a feasible approach.

The second reality is that, unlike Soviet revisionism after World War II, there are definitive territorial and ideological limits to Russia's challenge to the status quo. Russia's challenges most directly impact its nearest territorial neighbors, as well as certain U.S. and EU preferences for global and regional governance as a whole. But in 2016, unlike in the 1950s, there is no worry that, left unchecked, Vladimir Putin will be sending tanks to Paris, Rome or Berlin, and perhaps not even Warsaw or Budapest either. Nor does Putin seem to want to destroy U.S. leadership in the world, rather to contain and limit it, restraining Gulliver rather than killing him outright. As such, the immense effort to mobilize a genuine transatlantic partnership to contain Moscow—which was no easy task even when it was to face a Soviet Union which had shown its willingness, per Josef Stalin's dictum about each power imposing its social and political system “as far as its armies can reach”—is even harder when, for many Europeans (other than those in the Baltic basin or along the borders of Ukraine and Belarus) the threats posed by terrorism and migration seem more pressing than Russian actions.

In the United States, meanwhile, there appears to be a real division between those who see Russian activity as the principal threat and those who feel that Russian actions, while annoying, need not preclude joint U.S.-Russian efforts in other areas, starting with bringing an end to the Syrian civil war—since there is little appetite for Washington to commit to taking the lead to intervene in that conflict. Those who advocate a degree of compartmentalization of the relationship, many of whom also hold faith that economic pressure from Western sanctions and lower energy prices will force the Kremlin to back down in other areas, see no reason to accommodate Russian demands in places like Ukraine, but also do not wish to move into a more confrontational position vis-à-vis Russia.

So, despite the various meetings of experts, America's Russia policy now seems to be in neutral—a waiting game to see if Putin falls, if Russia's economy gives out or if the Russian military can no longer sustain its current force structure—and to pass this problem on to the next president.