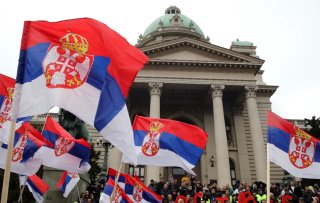 A distrusted former Western adversary, contemporary Serbia strives to restore its international reputation. The country has gone from exclusion from the United Nations in the 1990s to becoming a European Union candidate and arguably the most promising market in the Balkans. Yet at the very mention of a dispute in the region, voices in the international community are quick to point to Serbia, denouncing its various stances as being problematic, if not worse. On matters of development, the country is perceived as an “enabler” of Russian and Chinese influence. And culturally, the Serbian identity is deemed acceptable so long as it stays strictly within the borders of Serbia proper.

The reality is not nearly as scandalous. Serbia is a country like many others: a rational actor with real-world priorities. Countries will always want their streets safe, their economy growing, and enough people perpetuating the nation’s identity. Though sometimes labeled as an intentionally malevolent actor, Serbia is—as opposed to being strategically malicious—ultimately almost universally reactive. A comprehensive understanding of the conditions Serbia operates under is, therefore, necessary to grasp what drives its policy choices—in particular, how the country’s geoeconomic imperatives, security needs, and cultural background determine its objectives.

Despite benefitting from a moderate continental climate and ample tracts of arable land, Serbia is landlocked and cut off from direct access to warm seaports. The country sits at the center of Southeastern Europe—an important economic and cultural crossroad between Asia Minor and Central Europe—and relies on three major trade routes for economic success.

The first runs along the Danube River—which only makes sense, given that navigable rivers are any landlocked states’ most critical geographic resource. With the Danube draining into the Black Sea, Serbian products can be transported to the Romanian port of Constanta, and from there, continue to all shores of the Euxine and even the Mediterranean through the Bosporus. Additionally, going upstream on the Danube brings goods as far west as Germany—Serbia’s largest trading partner—passing along the way through the European heartland.

The second route is over land, on what is now the country’s portion of the Pan-European Corridor X—a highway that connects the northern border with Hungary to Serbia’s southernmost point before continuing into North Macedonia. From the southern border, only 255 kilometers of highway—and an adjacent railway—separate Serbia from the Greek port city of Thessaloniki on the Aegean Sea. The corridor not only links Central Europe on one end to warm seaports on the other, but also the Middle East with Central and Western Europe. Crucially, Serbia sits in the middle of it as a transit country. In fact, the route is so essential that it’s attracted China’s attention, which signed up to modernize the railway for high-speed travel between Belgrade and Budapest. Eager to modernize the railway to Greece, Serbia could complete its internal portions of the project in a few years, which would accelerate economic growth, shorten travel times, and expand the reach of Serbian trade.

The third, and least economically viable route, leads through western Serbia to the Montenegrin port of Bar. Although the shortest path from Serbia to any shoreline, Bar’s shallow depth frequently reduces its containership capacity and flow of goods, bringing down profitability levels to slightly above the break-even point. For this and other reasons, the port has been generating losses for years, causing some of its own shareholders to abandon future operations. Unfortunate as this is, the rest of the Montenegrin shoreline offers even fewer opportunities, due to a lack of infrastructure and natural obstacles.

Given this situation, Serbia has been trying to compensate by turning to its western neighbor, Croatia. Though the two countries have a complicated history, their economic cooperation has been on the rise in recent years. Serbian businesses have been making good use of the ports of Rijeka and Split on the Adriatic coastline. Since Italy, Serbia’s second-largest trading partner, lies right across the Adriatic, all three countries stand to gain from use of the Croatian shoreline. The downside is that Croatia’s ports are 500 kilometers from the nearest Serbian border. Tucked in northern parts of the Adriatic, they are relatively remote, making the rest of the Mediterranean harder to reach quickly.

Anything that endangers these economic lifelines is a major security concern for Belgrade, and elicits a strong reaction.

Consider, as an example, the matter of Kosovo, constitutionally an integral part of Serbia and its historically essential component. Its formal independence, sealed by membership in the UN, would significantly reduce the strategic depth of the Serbian south, leaving portions of Corridor X fewer than 10 kilometers away from Kosovo—now a hostile territory demographically dominated by ethnic Albanians. Worse, the possibility of territorial exchange, which was reportedly considered at one point, threatens to absorb parts of Corridor X into the would-be independent state.

Similarly, the ongoing project to construct a Niš-Priština highway has little to no strategic significance for Serbia, running barely seventy kilometers through its territory before reaching the administrative line with Kosovo. From there to the Albanian port of Durrës, it traverses ethnic Albanian territories, carrying no benefit whatsoever for the increasingly endangered Serb community in Kosovo. The project, however, is of immense importance to Albania, being their vital link with Central Europe.

Kosovo is not the only concern on Belgrade’s radar, nor are they all centered on infrastructure and geography. Balkan countries are wary of each other and would be ill-advised not to be. Occasionally, they engage in “threat inflation” to attract the attention—and more importantly, the assistance—of great powers. As the central actor in the region, Serbia has frequently been on the receiving end of this tendency. For instance, in traditionally friendly Montenegro, President Milo Djukanović’s regime started manufacturing crises after its grip on power loosened. Posing as a guardian of Western values, Djukanović has repeatedly attempted to reverse his domestic fortunes by accusing Serbia of interference and expansionism. But as Serbia’s geo-economic lifelines demonstrate, Belgrade has little to gain from such adventurism economically, while it wouldn’t dare tamper with the security of a NATO member state.

Another regional flashpoint is neighboring Bosnia and Herzegovina. Belgrade has long dealt with accusations of fueling secessionism of the Serb entity in Bosnia (Republika Srpska)—a claim that has resurfaced due to ongoing circumstances. In truth, Serbia remains deeply uncertain about its Bosnia policy. While eager to support the Bosnian Serbs, Belgrade’s hands are tied as it faces a territorial integrity issue of its own in Kosovo. Furthermore, Serbian strategists hold serious concerns over the prospect of an independent Republika Srpska. The entity already lacks territorial continuity in the Brčko District, while another narrow chokepoint squeezed between the town of Goražde and the Montenegrin border is so tiny and rugged that it makes building critical infrastructure nearly impossible. Furthermore, promoting Republika Srpska’s independence would risk Serbia’s permanent alienation with the remainder of Bosnia, which would result in noticeable economic consequences. Instead, by having its ethnic compatriots remain part of the existing Bosnian system, Serbia is able to prevent damaging policies from being implemented in a neighboring state. Finally, an underdeveloped Bosnia goes against Serbian vital interests. If impoverished, it is a major cause for the migration of Bosnian Serbs to Serbia, leaving Republika Srpska worse off demographically. Belgrade has no interest in accelerating this process, as Serbian president Aleksandar Vučić admitted in a March 2021 interview.

Paradoxically, in a region confined by NATO, Serbia’s paramount security concerns stem from—as one can guess—NATO. The alliance almost entirely surrounds Serbia, rendering any prospective operation on Serbian soil a joint effort against which the Serbs cannot defend. As a consequence of the 1999 war, NATO patrols Kosovo, where Serbia depends on it to protect the remaining Serbs, which the former sometimes calamitously fails to do. NATO also strongly leans in favor of Kosovar independence, making Serbia’s borders undefined and complicating any future change of heart that Belgrade may have about joining the alliance.

Overall, in contrast to its unfair reputation as a regional troublemaker, Serbia is reactive rather than proactive. When it acts, it does so cautiously, in a limited scope, and usually in damage-control mode. However, as a rational actor, the country also avoids unnecessary dependence. Serbia is well aware that relations rife with toxicity can turn even the most technical matters into politically contentious issues. In fact, this principle applies universally: it is ill-advised to direct products to ports held by adversaries, build roads that weaken one’s own geopolitical position, or support initiatives that in any way increase its own vulnerability.

Absent a major power to pressure it into making unsound decisions, present-day Serbia is well-disposed to avoid such problems. Its lifelines lead to infrastructure endpoints in Romania, Greece, and Montenegro—friendly nations with which exist significant cultural ties. Hosts to predominantly Orthodox Christian populations, Romania, and Greece support Serbia’s position on Kosovo. Montenegro recognizes Priština’s unilaterally declared independence, but is home to a sizable population of Serb ethnic origin, and an even larger one holding pro-Serbian views. In such environments, culture plays a critical role, making security a non-issue and economic interests easier to advance.